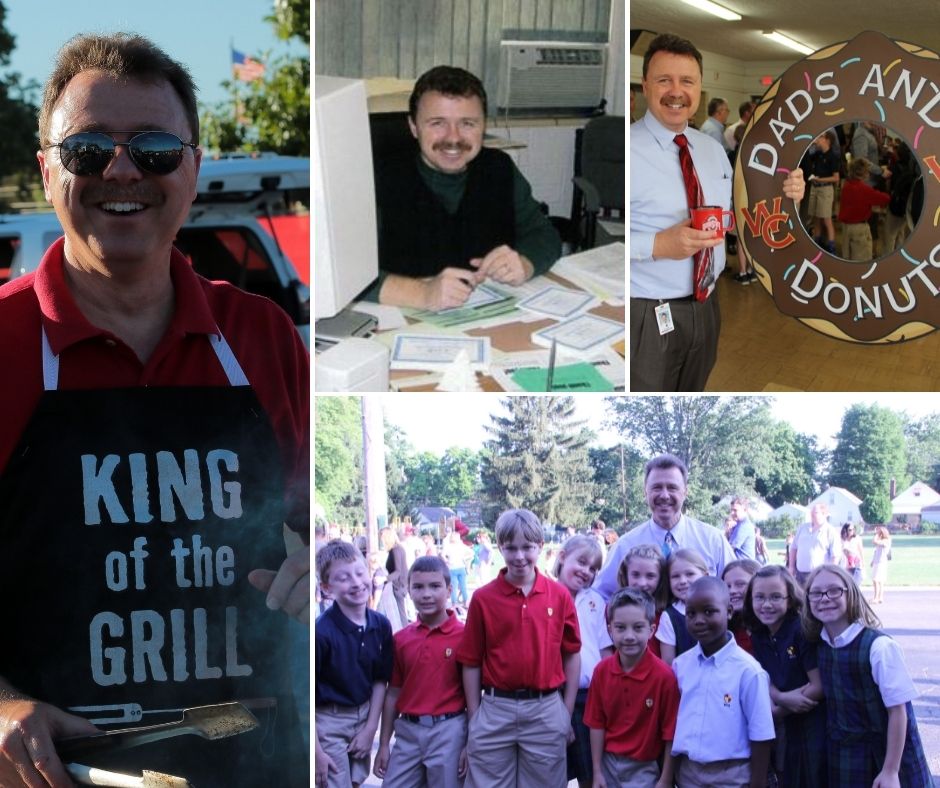 “If you looked ‘elementary school principal’ up in the dictionary, I suspect you would find Jim Parrish’s picture next to it.  Over several decades, Jim Parrish has been a respected leader, a trusted mentor, and a much-loved friend to generations of WC families. When WC needed an interim Head of School, Jim graciously assumed the role and led unselfishly,” shares John Barron, president of WC’s Board of Directors.

At the end of this year, Jim Parrish will complete his 29th year in education and his 22nd year at Worthington Christian, but this is not where he envisioned himself over thirty years ago. Parrish has faithfully and sacrificially served at WC for the last 22 years in many capacities. He started at WC as an elementary teacher, then became the elementary school principal, and then was asked to also serve as Assistant Head of School. For this school year, he has stepped into the role of Interim Head of School during a time of transition for the WC community. As his tenure draws to a close, he reflects that he has come to this point because of the beautiful leading and guiding of the LORD. In his words, “This journey has been a wonderful surprise.”

Parrish’s career path did not start in the education sector. After earning a degree in communications from the University of Toledo, he spent five years in various jobs within the business world. During that time, he frequently visited his wife Terri’s fourth grade classroom to help her. His interest in education grew, and after some key conversations and connections through her principal at the time, Parrish decided to go back to school at Capital University to earn a teaching certificate. Starting in 1992, he spent seven years teaching fifth grade in Gahanna. “I’m a kid at heart,” Parrish explains with a laugh. “I especially love teaching kids in fourth through sixth grade. Developmentally, it is so much fun to watch them move through a school year and begin to transition from concrete thinking to more abstract thinking.”

As is the case with many people, Parrish’s life journey took another major turn as he and Terri became parents in 1992 with the birth of their son Andrew. Their daughter Rachel was born three years later. The Parrishes began having conversations about what kind of education they wanted for their children. They both grew up in the public education system and had teaching experience in public schools, but the LORD began to pull their attention towards Christian education through their involvement as committed members of Grace Brethren Church. Struck by the idea that their children could learn in harmony with God’s Word, they decided to commit themselves to providing a Christian education for their own children. As they considered the best way to go about keeping this commitment, Parrish began exploring the possibility of joining WC’s faculty.

With Troy McIntosh as the elementary principal, Parrish became WC’s fifth grade Bible and social studies teacher in 2000. At that time, teaching in a Christian context was a new experience for the experienced educator. “It was a steep learning curve,” he recalls of his journey in developing the ability to integrate faith and learning. “I had many conversations with and questions for Troy [McIntosh] on faith integration. It’s WC’s teachers that truly put ‘legs’ on learning in harmony with God’s word and teaching WC students that we become more like God as we learn.” After four years of teaching at WC, Parrish became the elementary school principal as Troy McIntosh moved into the role of the school’s Assistant Head of School (then-superintendent). It is in this role that he has served for the last 18 years.

In reflecting on his career, he is quick to credit his wife Terri, “I couldn’t have done this without her…she has been an incredible helpmeet, confidant, and best friend.” He also sees now that while he was initially drawn to WC for the sake of his children’s formation, God has also used WC in his own formation. “One of the principles that has guided my focus throughout my career is this: ‘Prepare the child for the path, not the path for the child.’ Life is not fair; we all go through difficulties. Partnering with parents to help their children prepare for the road ahead of them is a sacred trust.” In seeing his children grow through WC and become adults with their own paths to walk, he asserts that they were prepared for many options after their time at WC.

The Parrishes’ daughter Rachel (WC’ 13; married to Daniel Dalton) is in her second year of law school at the University of Virginia.  His son Andrew (WC ’10) is currently in his fourth year of residency as a Reconstructive Plastic Surgeon in Dayton, Ohio. Andrew’s wife Lindsay just gave birth to their first child, and she will begin work as an attending obstetrics physician this September. Jim explains, “We are looking forward to being ‘Pop’ and ‘Nana’ as we minister to our son Andrew and his wife Lindsay during this next chapter.” The new grandparents will move to Dayton, Ohio, this summer to be near their growing family. For the coming school year, Jim will retain the title of Assistant Head of School, serving as an advisor to the new Head of School Dr. Mike Hayes. In his words, “I truly want to help Dr. Hayes and help to make this a smooth transition for everyone…I truly believe that the best years of WC are ahead of us.”

Former Head of School Troy McIntosh says of Parrish, “Exemplary schools are built on the work of people like Jim Parrish. He has been a trusted and faithful member of the administrative team for almost two decades and during that time he has helped form countless numbers of students into the students and people that God created them to be. What a legacy he has left. WC is a better place today because of him and all WC thanks him for his service.”

Please join us in celebrating Jim Parrish and how God has worked through him at WC over the last two decades by joining us for a drop-in reception for him on Wednesday, May 18, between 4:00-5:30 pm at the AC Auditorium (6675 Worthington-Galena Road).