CLEARING THEIR OWN PATH 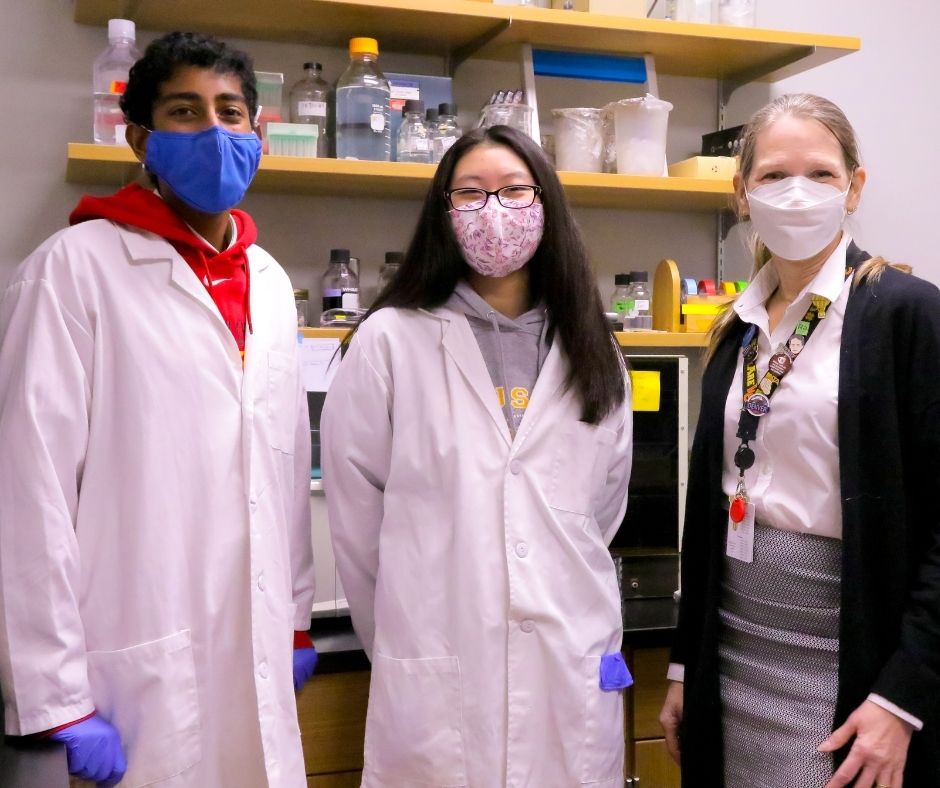 If you ask Worthington Christian senior Rena So what field she is interested in pursuing after graduation, her collected, nonchalant answer might catch you off-guard: tissue engineering. She and classmate Josh Jeyandran have been interested in the sciences since middle school, and their journey through WC’s Upper School science department has opened up myriad opportunities for them to pursue their interests.

For Rena, the idea of engineering began floating to the top of her interests in middle school. Her engineering interest took on a biology-based undertone as she completed Upper School science teacher Krista Wood’s biology class. Outside of WC, Rena has accrued almost 170 hours volunteering as an educator at the Center of Science and Industry (COSI), starting her 10th grade year. She’s been a long-time member of WC’s Biology Club, participating in science-based competitions. This year, she is serving as Vice-President of this very active club.

Josh shares Rena’s long-standing interest in science. WC’s Immunology class (that Rena also took) was particularly impactful for him. He has volunteered at the Columbus Zoo and Aquarium for the last four years, educating zoo guests and occasionally assisting keepers with animal-related care responsibilities. He, too, has been heavily involved in WC’s BioClub, and is now serving as its President. While both Rena and Josh have known and explored their specific interests in science throughout middle and high school, they have both taken part in a brand-new opportunity this year that has propelled them forward as scientists in ways they could not have imagined.

Since last August, Josh and Rena have been conducting research in The Ohio State University’s Department of Horticulture and Crop Science. One small area of WC’s new Upper School science wing has been transformed into their laboratory, in which they’ve been studying a particular disease-causing bacterium that is depleting maize crops around the world. They’ve experimented with different ways of sanitizing and sterilizing maize plants (including dousing the plants in alcohol and lighting them on fire for one second), collected data on the efficacy of currently accepted lab methods (like vacuum infiltration and micro needling), and comparing plant-inoculation methods against each other. They have taken part in regular lab meetings with graduate and post-graduate OSU students, as well as presented their own evidence and findings with this same group. They also had the chance to visit the Waterman Agricultural and Natural Resources Laboratory at OSU and catch corn flea beetles (the culprit bacteria-spreaders) with established Entomology researcher Dr. Celeste Welty. All of these incredible opportunities were made possible through Upper School science teacher Kelly Mikhail.

Mikhail began teaching at WC in 2016. She describes herself as a “researcher that became a teacher.” After completing a bachelor’s degree in Zoology and a master’s degree in Microbiology, Mikhail became manager of a lab at her alma mater Ohio University. She “pushed pause” on research and science as she raised and educated at home her four children. When her youngest child began attending WC as a high schooler, Mikhail found herself volunteering in the school’s science department. Shortly after that, she began teaching upper level science classes like Immunology and Zoology.

Mikhail also began attending local teacher workshops on plant-based technologies hosted by GrowNextGen, an Ohio-based organization dedicated to equipping science teachers and generate student interest in agriculture and food production. Through these workshops, she met and worked alongside people from OSU. She felt a growing passion to make high level sciences and research accessible to her high school students. With this passion in mind, she decided that through relationships she’d developed at OSU and her increasing personal desire to get back into research, she would apply to a Ph.D. program.

Mikhail submitted a research proposal to join Dr. David Mackey’s lab at OSU, specifically to study bacteria carried by the corn flea beetle that infects maize and causes a disease called Stewart’s Wilt. She describes herself as quite the non-traditional Ph.D. candidate, having stepped out of research for nearly three decades. She also finds the specific topic of her Ph.D. to be humorous, as her reason for studying Zoology as an undergraduate was to avoid taking botany. Nevertheless, her research proposal was approved and she began her Ph.D. work in Dr. Mackey’s lab last summer. It was also at this time that she and two of her students—Rena and Josh—began having conversations about them joining in her research. Since then, the two young researchers have been on an incredible journey, “clearing their own path,” as Josh puts it.

While under the guidance and supervision of Mikhail, much of what Rena and Josh have done in their make-shift research lab has been very independent. There work has been characteristically scientific: trial and error experimentation, asking questions, discovering more questions, careful observation and more. They both describe learning an immense amount about higher sciences and the nature of research work this year. Rena reports that this project helped her realize that she does, in fact, want to take part in research in college and beyond, in spite of what a time and energy commitment it requires. She’s still undecided in where she plans to study next but now better understands that she needs to look specifically at what lab opportunities and projects she can join at potential universities. Through this research project, Josh has discovered that he is interested specifically in clinical research. That is, he wants to take part in research that is applied to real people in real-world situations.

For their final months before graduation, Josh and Rena plan to submit this year’s research to several science symposiums and competitions—which means more data collection and analysis, writing long reports on this data, and potentially presenting it before others. They are both excited about where their love of science will take them and feel so well-prepared for the journey ahead because of their experiences at WC. In Dr. Mackey’s words:

“Part of Mikhail’s PhD program in my lab is the extension of her dissertation research into the high school classroom. This is an entirely new type endeavor for me and it has so far proven an absolute pleasure. Not only are Josh and Rena curious and enthusiastic, but their work is helping to advance Mikhail’s and therefore my lab’s research agenda. It is my hope that this experience promotes an enthusiasm in both students to further advance their education with a goal towards contributing to the sciences. All indications are that each of them is more than capable of doing so!”

Mikhail anticipates another four years of Ph.D. work followed by additional post-graduate studies, all the while bringing interested WC students along in her research. In addition to conducting and guiding WC students through her research, part of her original proposal includes curriculum development for science teachers across the state to use in agricultural and horticultural studies. All pointing back to her passion: making high level sciences accessible to young minds and inspiring students to explore.