COURTYARD DEDICATION SET TO HONOR THE FAITHFULNESS AND GENEROSITY OF MANY 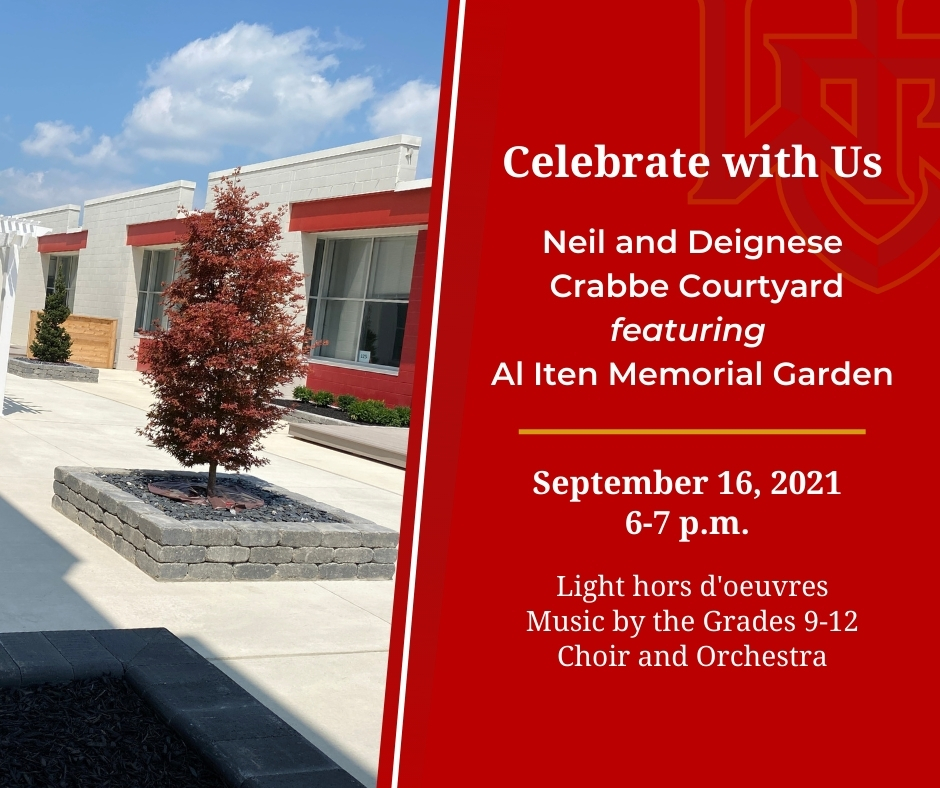 On Thursday, September 16, 2021, Worthington Christian School is hosting a dedication ceremony for the courtyard located in the center of the Tom Anglea Upper School building. Now complete with furnishings (arriving soon) and greenery, this space is one of the most eye-catching features of the new campus. It serves as a versatile outdoor meeting and classroom area, and it is the perfect place to enjoy a bit of sunshine during the school day. While it is aesthetically pleasing and functionally practical, the courtyard symbolizes much more than just a pretty space. Its very walls and furniture and garden tell a single story lived out in many different ways–a story of faithfulness to God and obedience to His call.

Neil and Deignese Crabbe moved to the Columbus area in the 1960s. Bringing a strong work ethic and faith in God with them from their hometown in West Virginia, they joined Grace Brethren Church in 1970. It quickly became evident that Mr. Crabbe and his wife shared a heart of generosity and commitment to the things of God to match his savvy as a land developer, builder, and businessman. As Pastor Jim Custer cast a vision for the church to build a Christian school in the early 70s, the Crabbes were fully supportive and involved. Not only were they among the group of WC founders who offered their homes as equity in order to secure a loan for the original school building to be built, but they also gave some of the land needed for the new construction on Worthington-Galena Road (now the Lower School-Grades 3-6 building).

Since that initial generous sacrifice, the Crabbes have continued to be incredible supporters of WC. They were involved in the many building purchases that WC has made over the last nearly 50 years. Mr. Crabbe himself put in the bid to purchase what became the Westview campus, and he was instrumental in many of the early business dealings for the school. In the words of Pastor Custer, Mr. Crabbe is “a man of great faith and vision and humility.” Custer also explains that Mr. and Mrs. Crabbe “really believed that God wanted the church to build a school,” and they have shown a deep commitment to Christian education for nearly five decades.

Though Mr. and Mrs. Crabbe did not have children of their own, Pastor Custer explains that their hearts have always been to support other families in their pursuit of Christian education. WC’s Director of Advancement Polly Shoemaker speaks to the purely selfless nature of the Crabbes’ generosity, “The Crabbes had nothing personal to gain from investing in WC for the last 50 years; they have done so simply because they believe in the school’s mission.”

Mr. Crabbe shares what a joy it has been for him and his wife to be a part of the school since its inception, “We are delighted to participate.” When asked what it’s been like to watch WC grow from its earliest days up to this point, Mr. Crabbe shares, “WC has come a long way and I am very, very proud. We believe in the school and in the teachers and the students that are coming out of the school.” The school’s leadership chose to name the courtyard space after Mr. and Mrs. Crabbe in honor of their continued commitment to WC. The Crabbes were unaware of this until they were able to visit and view the Upper School campus in the spring of 2021, at which time the school administration surprised them with the news. Mr. Crabbe explains, “We were overcome when they told us of the naming; it is very honoring and humbling.”

Within the courtyard, there is yet another story embedded and rooted in another soul’s faithfulness to God and His call.

The courtyard is home to the new Al Iten Memorial Garden, named for the beloved English and Bible teacher who gave many years of his life in service to WC. He was an avid gardener and loved walking along his home’s property to reflect on God’s beauty. His memorial garden is a small reminder of the significant impact Iten had on countless lives throughout his time on this earth and of his unwavering faithfulness to Jesus and His ways.

What is hard to fully grasp is that beyond the Al Iten Memorial Garden, beyond the Neil and Deignese Crabbe Courtyard, even beyond the Tom Anglea Upper School building, the impact of these stories is far-reaching. As WC persists in its mission to be a Christ-centered academic institution where students develop the mind of Christ through rigorous intellectual, creative, and physical pursuits, there are many, many people involved in making that happen.

This courtyard project was one of three large community-building endeavors addressed by last year’s Warrior Initiative. With the generosity of so many in the WC community, the Warrior Initiative met its goals of raising $125,000 for financial assistance to current families, $80,000 to improve the Lower School playgrounds, and $90,000 to complete the furnishings and installation of the Al Iten Memorial Garden.

The entire school community is invited to the dedication ceremony to honor Mr. and Mrs. Crabbe, Mr. Iten, and the many others who have sacrificed and given to WC. The ceremony is taking place from 6:00 to 7:00 P.M. on Thursday, September 16, 2021, in the courtyard itself (at the Tom Anglea Upper School located at 1485 Lazelle Road). There will be live music performed by members of the Upper School orchestra, light hors d’oeuvres served, and a brief presentation at 6:30 P.M. that will include a musical piece by the Upper School choir. Please join us in this celebration!