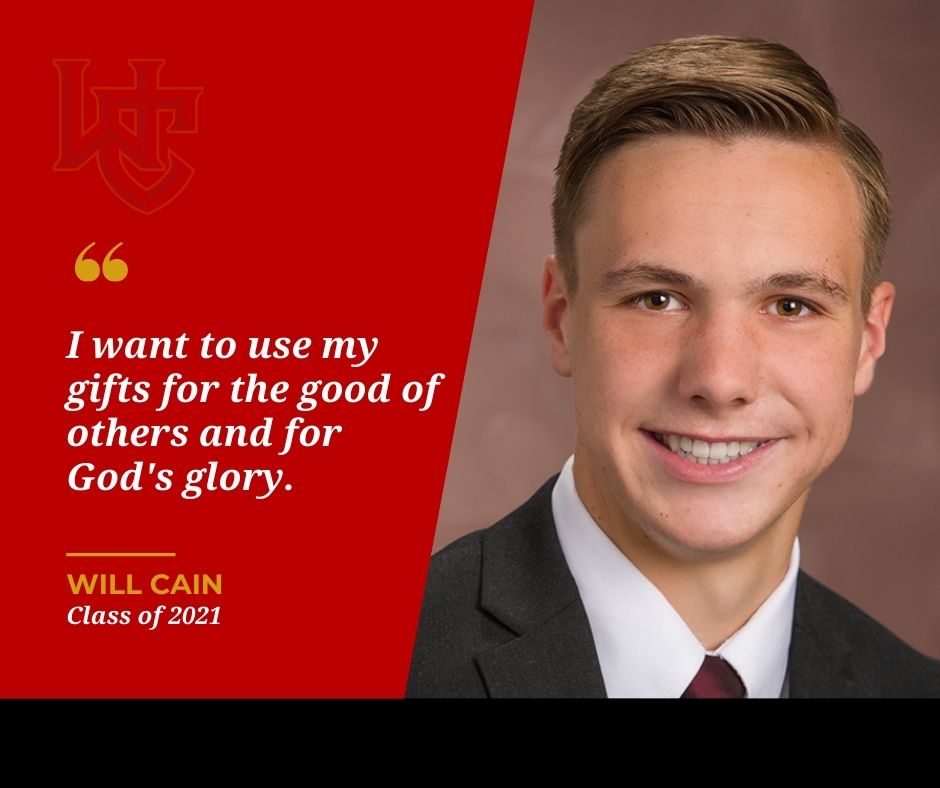 In many ways, graduating Warrior Will Cain embodies I Peter 4:10, which says, “Each of you should use whatever gift you have received to serve others, as faithful stewards of God’s grace in its various forms.” Following graduation, Cain is set to attend the University of Cincinnati this fall. Having earned a university-level academic scholarship and an additional departmental scholarship, he is entering the university’s 4 + 1 program in which he will obtain a bachelor’s degree in mechanical engineering and master’s degree in mechatronics in a total of five years. Mechatronics is a field that incorporates mechanics, electronics and computing to develop more efficient automated systems. Cain explains that his dream job is to work in NASA’s Jet Propulsion Laboratory. Like so many of Worthington Christian’s graduates, the dreams and plans that Cain envisions for his life have developed over the course of time—on a journey toward academic excellence and maturing, Christ-centered spirituality.

From a young age, Cain has had a keen interest in technology and engineering. As a fifth-grader in Ms. Sarah Herren’s class, Cain declared that he wanted to be a Google Tech I.T. when he grew up. Having both parents work in the field of Information Technology, he credits early technology exposure with inspiring his interest in that realm. His academic experience at WC has also served to sharpen his skills and interests. He fondly recalls having the opportunity to compete in WC’s Lego League as a middle schooler, working with peers to design a robot that would perform a specific task. Cain took his first computer-aided design and drafting (CADD) course as a high school freshman and completed CADD II as a sophomore. It was also during his sophomore year that he participated in WC’s math club and completed his first College Credit Plus (CCP) course. By the end of his sophomore year at WC, Cain knew that he wanted to continue pursuing advanced studies in math and engineering.

As a junior, Cain began spending half of each school day attending WC classes, and the second half of each school day he attended college classes through Columbus State Community College. He took classes at Columbus State’s downtown and Delaware campuses, including Calculus 1 and 2 and Engineering. He followed in this pattern of half-days at WC and half-days at Columbus State through his senior year as well. He will enter his degree program at the University of Cincinnati with over a year’s worth of college credits. He attributes a strong work ethic to his training at WC, enabling him to manage university-level studies at a young age. Tim Kraynak, Upper School Assistant Principal and College Counselor, says of Cain, “God has blessed Will with a bright mind, and Will has honored the Lord by cultivating a tenacious work ethic and a passion to challenge himself relative to his academic pursuits.”

Though he has maintained a demanding academic workload throughout high school, Cain has also managed to find time for other disciplines and activities. He participated in WC’s band as a freshman and got the chance to compete (and win!) in one of the Ohio Music Education Association’s (OMEA) regional competitions. He has also been very involved in athletics, playing on WC’s baseball team for two years and WC’s soccer team for all four years of high school. Outside of school, he has made time to volunteer in the children’s ministry at his home church, Grace Polaris, since he was in sixth grade. He currently serves as a second-grade Sunday school teacher.

As Cain reflects on his journey at WC and what has most impacted him, what comes to his mind—like so many other WC graduates—is the relationships he has with WC faculty members. He explains, “WC teachers are so relational, building respect and rapport with students that promotes community and makes for a good learning environment.” He speaks of teachers such as Bible teacher Dr. Joe Price as being relatable, caring deeply about students, and willing to talk about the hard things of life. Cain views these types of relationships as serving to develop well-rounded students. And above all, through every class and every discipline at WC, Cain recalls all of his teachers “teaching through Christ.”
It is in this environment that Cain has come to realize his gifting and abilities. But even beyond an understanding of his area of interest and his ability, Cain’s time at WC has given him a framework of servanthood in which he understands the calling on his life. He desires to help others. In his words, “God has blessed me in school and with specific abilities. One of my prayers is that I don’t just use those abilities for myself, for my own gain. I want to use my gifts for the good of others and for God’s glory.”