‘FOR SUCH A TIME AS THIS’ 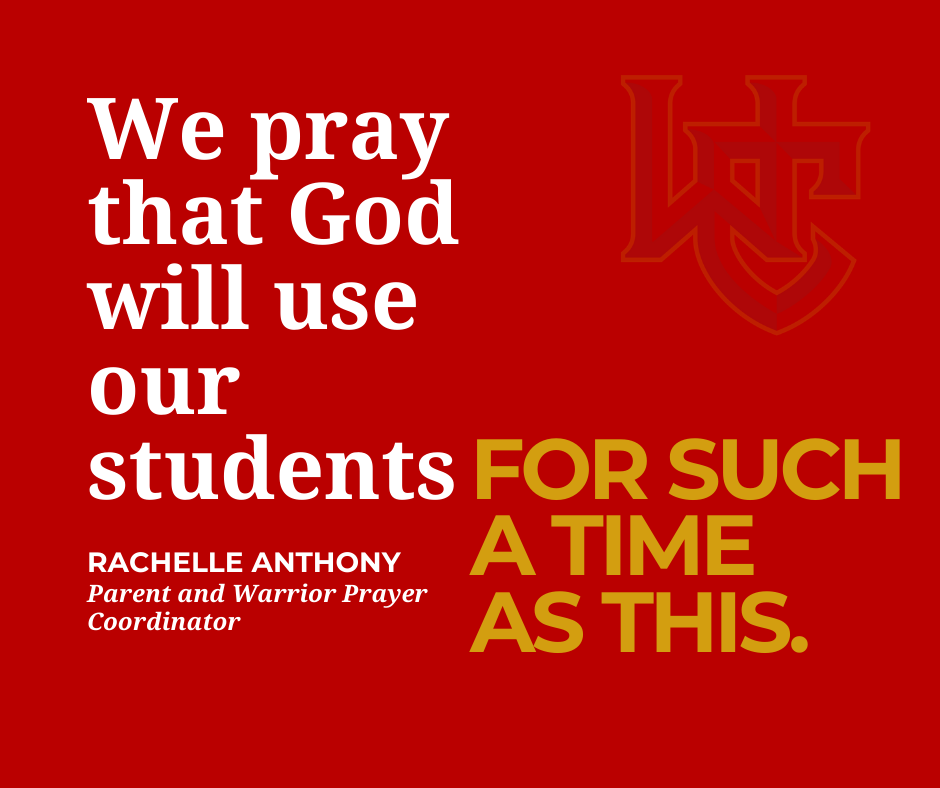 “For if you remain silent at this time, relief and deliverance for the Jews will arise from another place, but you and your family’s family will perish. And who knows but that you have come to your royal position for such a time as this?” Esther 4:14

Many of us are familiar with the story of Esther–a young Hebrew woman chosen by the king of Persia to be his queen. Not long after she became queen, Esther’s people, the Jews, were in danger of being destroyed by a plot put together by the king’s right-hand man, Haman. Esther’s father-like uncle Mordecai sent her the above message, encouraging her to consider her position and how she might use it to save her people. Just a few days later, Esther shrewdly addresses the king on behalf of the Jews, and a series of events unfolds in favor of the Jews, resulting in their triumph.

Mordecai’s words to Esther, “for such a time as this,” still carry meaning for us in 2020. Though WC was founded on and has been sustained by faithful prayer since its inception, prayer for our school community and our children seems especially vital in this current season. For the last two years, the Warrior Prayer initiative has sought to unite WC families in praying God’s Word over our school community. As we begin this new school year, Warrior Prayer is once again inviting families into prayer for such a time as this.

Political unrest, racial unrest, and a global pandemic seem to dominate our world. The conflicting opinions on all of these topics make it easy for judgment and division to swell and gain a foothold in our community. Though there is nothing new under the sun, these times are very much new to our children (and to us!). In the midst of it all, it is good to consider this: God chose this generation to be growing up right now, in these times of uncertainty. Our God will certainly use these events to equip this generation to accomplish His purposes.  We are training the difference-makers! Our children won’t always be children but while they are, we have an awesome responsibility to teach them how to navigate current events through the lens of truth found in God’s Word.  And so we pray that God will use them for such a time as this.

To this end, the leaders of Warrior Prayer are asking the WC community to join together in prayer for the school again this year, now with three new prayer directives:

Regarding political tensions, we can pray: Bring Your Kingdom to earth.

Regarding racial tensions, we can pray: Make us one.

Regarding COVID-19 and the circumstances it brings: Be merciful to us as we hope in You.

As challenging as unity and community seem to be these days, Warrior Prayer is one way to feel connected and stay engaged. Here are three opportunities to join in:

To learn more and/or sign up to participate in Warrior Prayer, see the following: