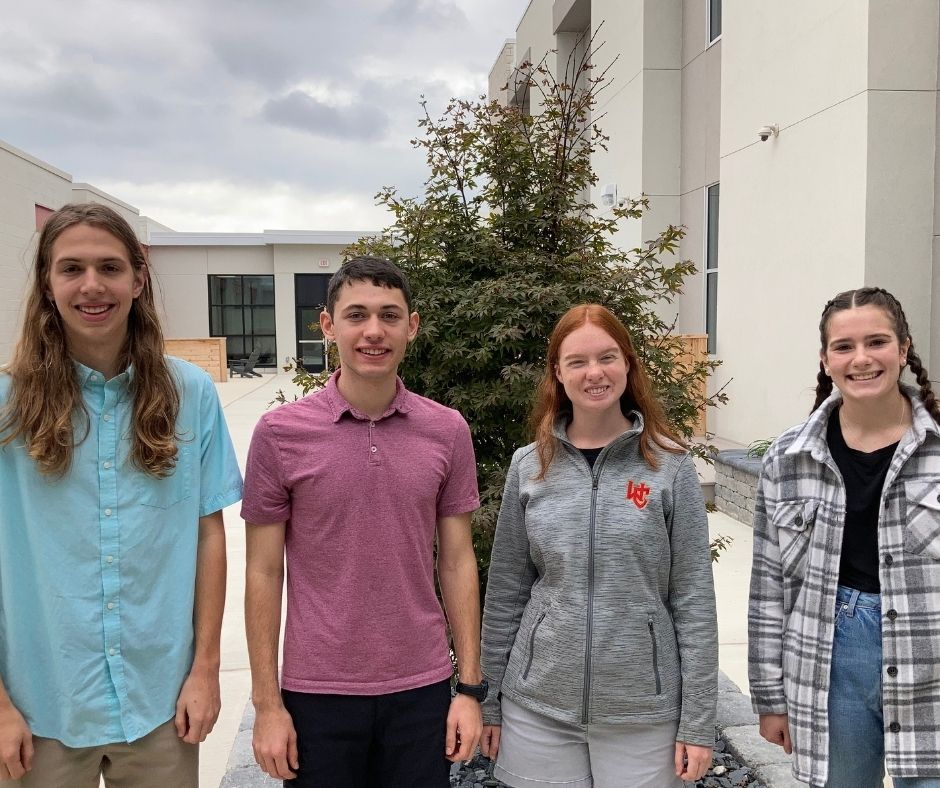 Each fall, WC’s juniors—along with 1.5 million peers across the US–take the Preliminary SAT as a way of preparing for college entrance exams. This standardized assessment is also the qualifying test for the National Merit Scholarship Program. Of the 1.5 million entrants, 50,000 of the highest scores qualify for recognition in the National Merit Scholarship Program, and some have the opportunity to advance in the program to earn college scholarships.

Worthington Christian School has a rich history of students who have qualified for this prestigious program, and this year’s seniors are no exception. Of WC’s graduating class of 2022, it was recently announced that four Warriors have been recognized for their academic achievement in the National Merit Scholarship Program. Jonah Dean, Morgan Lawrence, Isaac Myhal, and Lily Rettstatt are the four WC seniors who have been recognized for their academic ability and achievement.

Each of these four students has been recognized as a “High Scorer,” achieving scores in the top 50,000 PSAT entrants for this school year. Additionally, Isaac Myhal has earned a spot as a National Merit Semi-Finalist among the top one-third of the highest scoring 50,000. He now has the opportunity to advance to become a National Merit Finalist (announced in February of 2022) and qualify for exclusive scholarships through the National Merit Scholarship Program.

Jonah Dean has been a Worthington Christian student since first grade. As a high schooler, he has been heavily involved in the performing arts. He has participated in eight WC theatre productions, taken part in several ensembles, and been a member of the choir for three years. He has also served as a house leader for Gratia since his junior year. He explains that he was “excited and honored” when he learned that he had been recognized by the National Merit Scholarship program. Of his academic experience at WC he says, “My teachers have always been great and have explained things in a way that makes sense to me. Education isn’t only about passing a test, and my teachers have helped me excel in many areas.”

Morgan Lawrence has been a Worthington Christian student since Kindergarten. She has been involved in a myriad of activities through her elementary, middle, and high school years, including cross country, swimming, track and field, band, orchestra, and Internship Academy. She describes being recognized as a merit scholar as an honor, explaining, “It’s truly an image of God’s faithfulness to me throughout all of my schooling and I pray that He would be glorified through it.” She credits her experience at WC with giving her the space to grow holistically over time. She says, “The teachers have pushed us to a standard of academic excellence since elementary school, and their efforts have paid off. Not only have they taught me educationally, but they have walked through life with me and that is the greatest blessing about Worthington Christian. The teachers not only care deeply for your academic excellence, but also for your emotional and spiritual health. When you get the privilege to wake up and enter a building where you feel loved, valued, and cared for it is so much easier to pursue your gifts to the best of your abilities.”

Isaac Myhal has been a Worthington Christian student since sixth grade. He has been involved in choir, theatre, Battle over Books, chess club, swimming, and boys’ Bible study. He explains that he was excited to find his name on the list of National Merit Scholars when it was released recently. Myhal lists many of his WC teachers as being instrumental in helping him earn the honor of National Merit Scholar. He says, “Mr. Clutz, Mrs. Gilliland, Mr. Richards, Mr. Wadsworth, Mr. Baugher, Dr. Price, and many others encouraged me to explore content beyond class and to balance my priorities.”

Lily Rettstatt has been a Worthington Christian student since fifth grade. She has been very involved in tennis, choir and ensembles, and theatre while at WC. Having “almost forgotten” she took the PSAT a full year ago as a junior, Rettstatt describes that she was surprised to find out she has been recognized by the National Merit program. She explains, “My experience at WC has definitely helped me to excel academically and do well on this test. The teachers are amazing and I can tell how much they love God and love the students, and that leads them to care about what they are teaching and embrace their role in this community. The students also really value academics and community and push each other to succeed.”

Join us in congratulating these four students for their accomplishments!