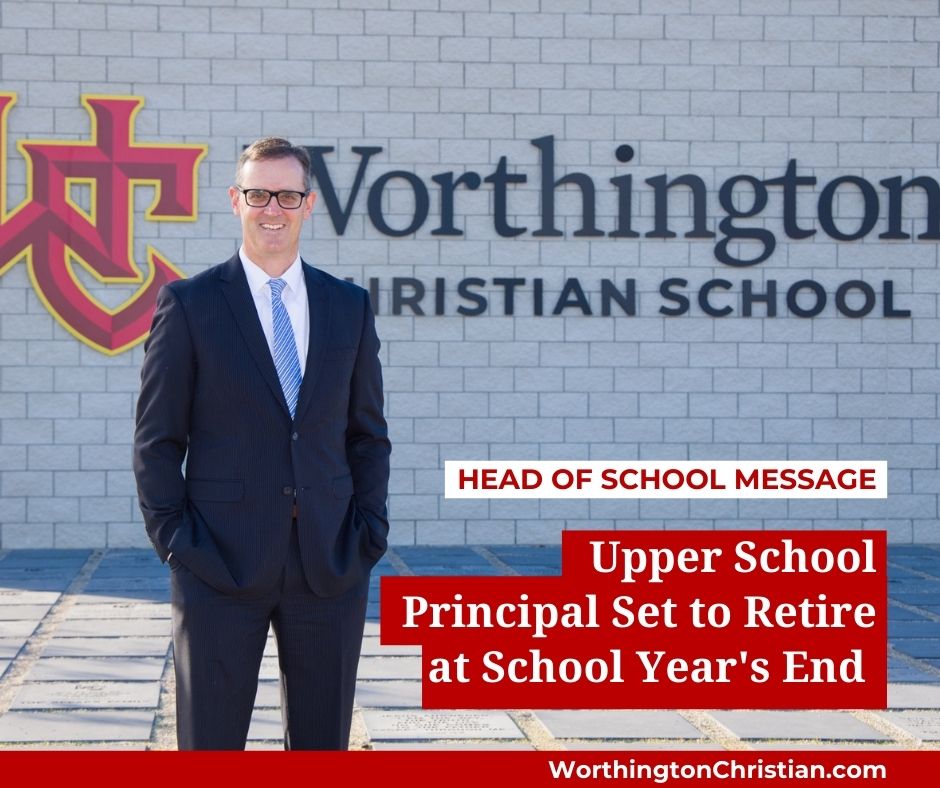 One of the great advantages that I have had over my eight years as Head of School is the fine group of administrators alongside which I work. The men and women that comprise the administrative leadership are committed to protecting the Christian and academic mission of WC. Therefore, it is with bittersweet feelings that I announce the retirement of Dr. Buzz Inboden as Upper School Principal at the end of the 2020-21 school year. Dr. Buzz, as he is known by almost everyone, has served our school for 27 years, including the last nine as principal.

Dr. Buzz came to me almost two years ago, prior to the 2019-20 school year, to let me know that he planned to retire at the conclusion of that year. Of course, we were in the middle of some momentous changes, including completion of the Forward.Together campaign, construction of a new Upper School campus, and restructuring into an Upper School with grades 7-12. Managing all of those changes was going to be a massive undertaking that I knew would need experienced leadership. After several discussions, he graciously agreed to continue another year to guide the school through that transitional period. I am so glad that he did, especially considering he did so before the COVID outbreak and all of the additional challenges that it has presented.

The influence that Dr. Buzz has had on Worthington Christian will extend well beyond his retirement. He loves our students and is a tireless advocate for them. An email from a recent alumna stated how grateful she was for his constant support during what was a “fiery furnace” period for her. She wrote, “I recently realized that it was nothing but the divine will of God that made me choose WC. Dr. Buzz, you walked through that furnace with me.” When one works in a school over a long period with hundreds or thousands of students, it is easy to lose track of the unique qualities and needs of individual students that derive from being made in the image of God. That has not happened with Dr. Buzz. He has a gift for seeing things that many other people miss.

I have come to know him as a friendly contrarian, in the best sense of that phrase. He frequently challenges our preconceived notions, urging us to consider other ways that might fit better with a biblical understanding of an issue. He has an incredibly fertile mind that produces an array of ideas for school improvement. Yet, he also has as small of an ego as any person–let alone a leader–I have ever known. He exudes no personal agenda and is willing to take all of the blame with none of the credit.

His accomplishments are many, including the development of the house system and its student leadership opportunities, restructuring the faculty, schedules, and facilities of the new Upper School campus, and expansion and growth of student clubs. As one of his colleagues notes, Buzz has always valued risk, discovery, struggle, and learning as opposed to having a grade as the end goal. This led him to adding the pass option in course selection, a restructured grading scale, and academic recognition.

But perhaps his greatest work came during times of great mourning in our community when he compassionately shepherded grieving staff and students through the deaths of our former principal and two of our own students. He made space for all to grieve while also helping us understand a bit of God’s purposes in suffering. Those who were here during those times remember.

Dr. Buzz will be deeply missed. We have begun the search for his replacement for next school year and will update you later in the year as we identify the next Upper School principal.

Stay tuned for a more in-depth feature highlighting the career and impact of Dr. Buzz on WC this spring, as well as an opportunity for students and alumni to share their favorite memories and stories of Dr. Buzz in light of his retirement.