JOURNEY TO FINDING HERSELF 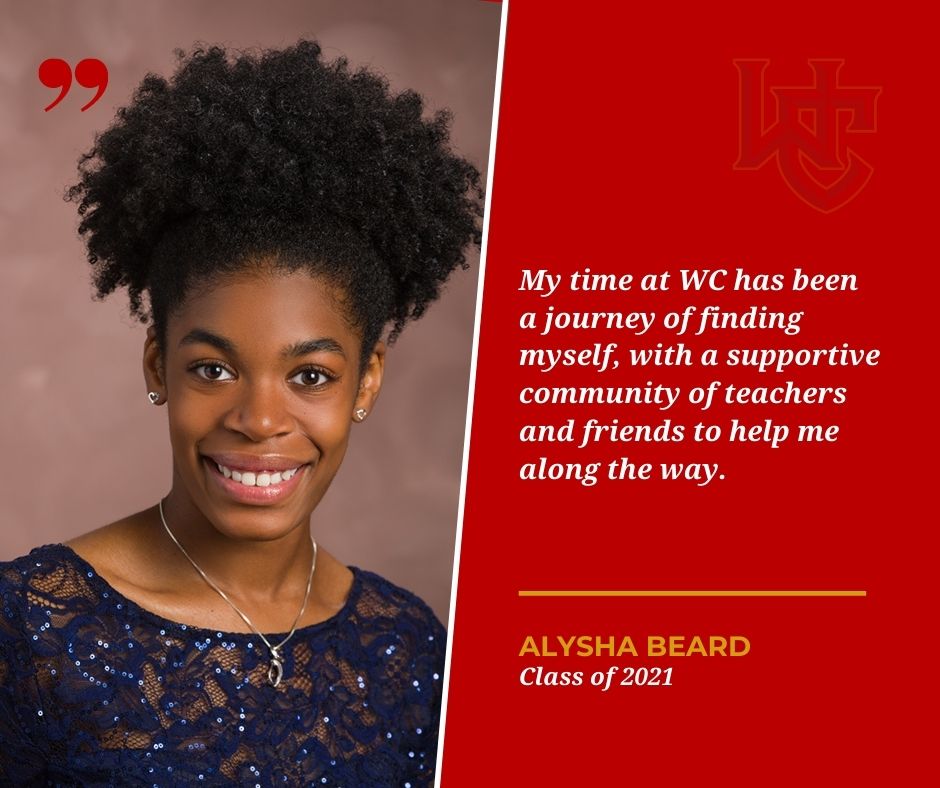 [Editor’s Note: This school year, we are starting our celebration of the 2021 Senior Class early by highlighting a different graduate each month of Spring semester.]

Alysha Beard’s journey at Worthington Christian School started with a shadow visit before her third grade year. The one thing that stuck out to her at the end of that day was how loved and safe she felt in the classroom. Ten years later as she prepares to graduate, she feels the same way. In her decade as a Warrior, she has discovered and explored many of the gifts and passions God has given her.

Music has been Alysha’s “main thing” since her earliest years at WC. She joined the elementary school choir and it quickly became one of her favorite elements of school. She has continued to participate in choirs since that time. She also started playing violin in the school orchestra as an elementary schooler, a love that maintains to this day. She explains, “Music classes are for me a break from all the other class, a great way for me to relax.” As an experienced high school musician and singer, she has earned varsity letters for both choir and orchestra.

In seventh grade, she added a new pursuit to her repertoire, one of a more athletic variety: track. She’d never considered herself to be much of an athlete, but Alysha quickly came to love the community component of being part of the team. She enjoyed getting to meet people outside of her normal social circles. With a continued dedication to improving in the sport, Alysha was elated to earn a letter for track her sophomore year.

Alysha joined United Front as a freshman, and has been an active member for the last four years. Interested in gaining experience as a leader, Alysha served as a Head of Household her junior year. She describes this as a positive experience that taught her, “Not everyone is called to be a leader.” While “HoH” was her most formal role as a leader, Alysha served others without titles or recognition long before that.

Alysha has a love for children that inspires her to help little ones. She recalls the first time she attended her home church Heritage Christian in Westerville, and she thought it was odd that the church had separate classes for kids. She came to love being a part of it, and began volunteering to help with the kids ministry as soon as she was old enough. Outside of church, she took it upon herself to begin offering homework help to kids in the latch-key program she was once a student in herself. After school during the school year, she could be found at Northtowne or Avalon Elementary serving those younger than herself through helping them complete their assignments.

Alysha also makes time to pour into her three younger siblings. Though they attend different schools, Alysha explains, “I want to give them what I’ve been given at WC. So many of my teachers have remembered me long after I’m one of their students. They stop me in the hallways and ask me specific questions about how I’m doing and things I’m involved with. They make it a point to continue to be invested in who I am, and I want to be that way for my siblings.”

Hoping to earn and save money for college, Alysha began working as a cashier at Kroger during her sophomore year. Since then, she has maintained part-time work there, as well as fulfilling all of her curricular and co-curricular commitments. She credits her work experience with helping her gain time management skills and responsibility. And true to her original goal, she has saved all of her work wages for college. She explains with a laugh, “It has been difficult to not spend that money on things that I want, but it is rewarding to work toward and accomplish a goal.”

And off to college she will go. She took several College Credit Plus classes in the last three years and worked hard to maintain great attendance and A/B Honor Roll. After navigating the college admissions process as the oldest child in her family, she has been accepted to OSU where she plans to study Business Administration this fall at the Newark campus.

Alysha attributes her interest in business to her mother, whom she regards as a pillar of strength and support in all areas of her life. “Through all the nights of math homework and preparing for a major project the night before, she’s never given up on me. Whenever it came to any track meets, choir or violin concerts, she would always be there and she’s given me so much support I wouldn’t trade it for the world,” explains Alysha. Of her mother and grandmother Alysha says they are “the reason I am what I am today.”

When asked to recount a particularly impactful moment at WC, Alysha didn’t hesitate to describe her experience in playing at the 2018 commencement. As a sophomore playing violin in the orchestra for this special occasion, she had several friends that were then graduating seniors. This moment caused her to reflect on the significance of the relationships she’s formed during her school years. “Even though I may not see many of these people again, the impact of these relationships will stay with me for a long time. It made me stop and consider, ‘How will I be remembered?’”

To sum up her school experience, Alysha reflects, “My time at WC has been a journey to finding myself, with a supportive community of teachers and friends to help along the way.”