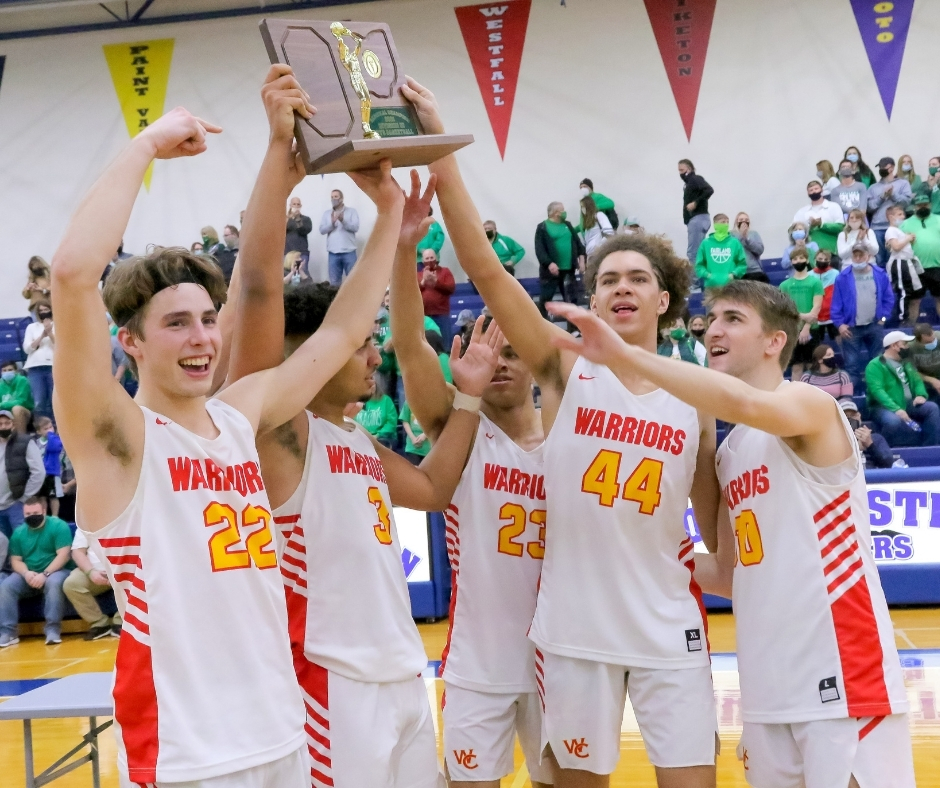 When the Worthington Christian boys basketball team faces Cincinnati Taft in a Division III state semifinal March 19 at University of Dayton Arena, it will mark the third time coach Kevin Weakley has guided the Warriors to the promise land.

Weakley was a point guard on the 1993-94 Warriors team that lost to McGuffey Upper Scioto Valley 56-54 in the Division IV state finals. He also coached Worthington Christian to a Division IV state semifinal in the 2007-08 season, losing to Bedford St. Peter Chanel 66-58.

However, the Warriors’ modus operandi has been completely different during the current journey. Far from the run-and-gun, 3-point shooting teams of the past, Worthington Christian has relied on its tough defense to get to the state tournament.

“This is an atypical Worthington Christian team. We don’t shoot the ball like some of the teams we have had in the past, but we have great size and we rebound really well,” said Weakley, whose team improved to 27-1 overall after defeating Proctorville Fairland 50-28 in a March 12 regional final. “We are so long that teams have a really tough time getting the ball into the paint against us. A lot of time they are forced to take low percentage shots.

“We have to win a little bit differently than firing up the three and scoring 80 points a game. People who know basketball come to see the way we play defense in the paint. Basketball purists really love to watch it.”

Prior to facing Cincinnati Taft, the Warriors have been allowing only 38 points a game in their tournament run, including a 50-25 win over World Harvest Prep in a March 5 district final. Going into its state semifinal, Worthington Christian had been holding opponents to 35 percent of their field goal attempts, including 27 percent from the 3-point arc.

Senior forward Kobe Buford said it takes a certain mentality to be a defensive squad.

“We have to be able to defend several shots in a row and get defensive stops,” Buford said. “Playing good defense is a physical thing as well as a mindset thing. You have to have the mentality of getting a stop every possession.

“But to be honest, that’s the same way we play on offense. We have to be focused and not turn over the ball.”

In an age of players wanting to have scoring portfolios like the ones they have on NBA Live videogames, one would think playing defensive basketball would be a hard sell.

According to Weakley, it is not.

“Kids buy into winning,” the coach said with a grin. “They have seen how important it is for us to rebound and play good defense. It has allowed us to have a really good season in terms of wins and losses.”

Weakley’s coach and predecessor Ray Slagle was the architect of the Warriors’ 3-point barrage offense. However, the former coach who guided Worthington Christian to a state title in 1998-99 and two other state tournament appearances, is not surprised by the stinginess of the Warriors.

“Every year I get a highlight tape of Worthington Christian,” Slagle said. “After watching it this year, I told Kevin your personality is stamped all over this team.

“My teams were more offensive than defensive minded. However, the Weakley brothers (Kevin, Jason, and Bryan) were the best defenders I’ve ever coached.”

To get into the regional bracket, the Warriors had to knock off nemesis Harvest Prep, the team who upended Worthington Christian 49-47 in a district semifinal last year.

In the weeks leading up to the district final, Weakley would spend 45 minutes each practice focusing on strategies they were going to use against Harvest Prep.

“Our guys were so laser focused on that game. I always thought the goal is to win the district tournament. Everything else beyond that is gravy,” Weakley said. “It’s so hard to win those tournament games because the coaches all know each other so well.

“We played a really good team in Wheelersburg in a regional semifinal, but part of our challenge in that game was getting emotionally recharged after beating Harvest Prep. We were a little lethargic in that game.”

The Warriors, who trailed 47-38 with four minutes to play, closed on a 12-point run to topple the Pirates. Drew Faieta led the comeback, coming up with a steal, an assist, and two key 3-pointers in the last four minutes to post a 50-47 win.

Due to COVID-19 restrictions, tickets are limited, but OHSAA is broadcasting games live on www.OHSAA.tv at the cost of $9.99 (free to Spectrum subscribers.) The Warriors (27-1) play Cincinnati Taft (16-4) on Friday at 5 p.m. The championship game will be played Sunday at 2 p.m.