THOUGHTS ON GIVING OUR STUDENTS A BIBLICAL APPROACH TO INJUSTICE 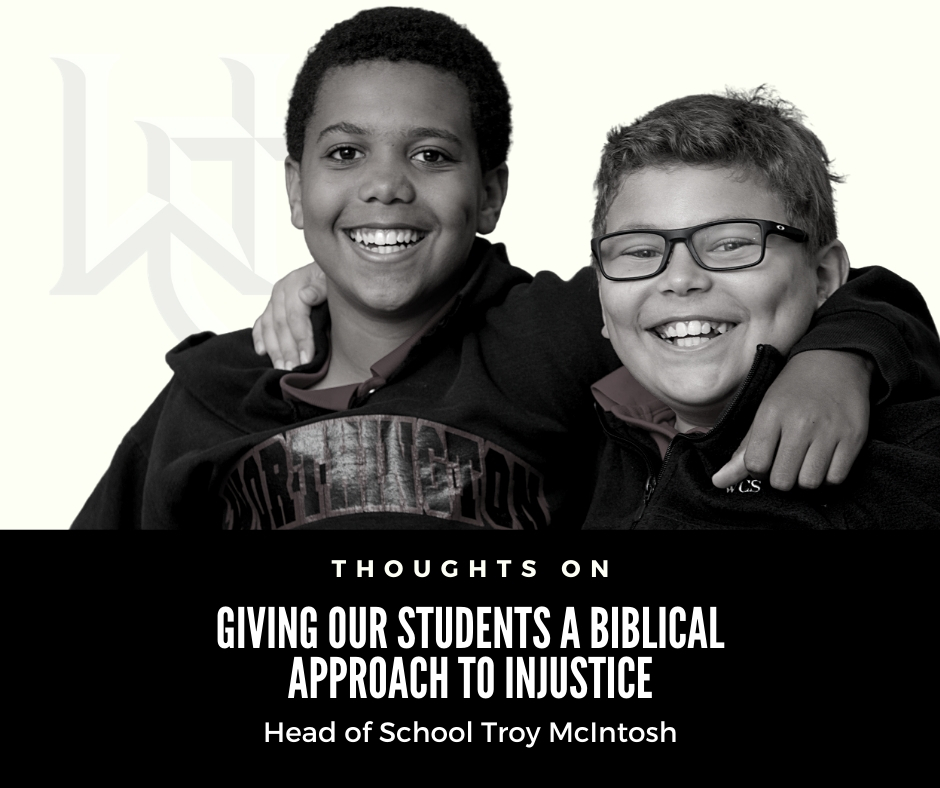 Head of School Troy McIntosh shares thoughts on recent events in our country.

The last three months have been wildly disorienting for our nation. Grief, anger, frustration, anxiety, and hardship have become common acquaintances for so many of us. It is enough to make us who are believers call out and say, “Lord, have mercy.”

The killing of George Floyd and the reaction to it has revealed the deepening fissures in our society. It should be no surprise to those familiar with the biblical accounts that we are living in a world shattered by sin. The effects of Genesis 3 run deep, not just through the hearts and minds of individuals, but right through the cultures and societies that we create. Our world needs to be redeemed and restored. What we are experiencing now is not the way it was meant to be.

Our students are growing up and trying to make sense of all that they see. Our school is not immune to the tensions and splinters of the broader society. A major component of what we believe a Christian education is meant to produce is a body of people who are able to thoughtfully apply theological and biblical ideas to our world’s problems, out of love for God and love for our neighbor. Worthington Christian School is committed to playing our role in developing this kind of people. Because of this, I feel compelled to share some thoughts on the current crisis we face. This is not meant to be an official school policy statement on a cultural issue. However, I also have enough sense to know that, as head of school, my ideas will have a significant impact on the school’s collective approach. I hope that I am also humble enough to know that, while many of the ideas I discuss here are simple and absolute, many others are nuanced and complex in a way that makes a reductionist statement about it inherently incomplete. Those nuances and complexities are the areas that I hope engender appropriate discussion and Christian debate among our school community in the future.

The gospel transcends politics and culture in ways that nothing else does. It is heartbreaking to see the suffering, discord, violence, and injustice sweeping our country. As gospel people, I believe Worthington Christian School can be used by God to bring the shalom that comes with God’s presence. As you pray for our country, please include our school. Even as Christians, we are needy people and no place needs the gospel more than WC.