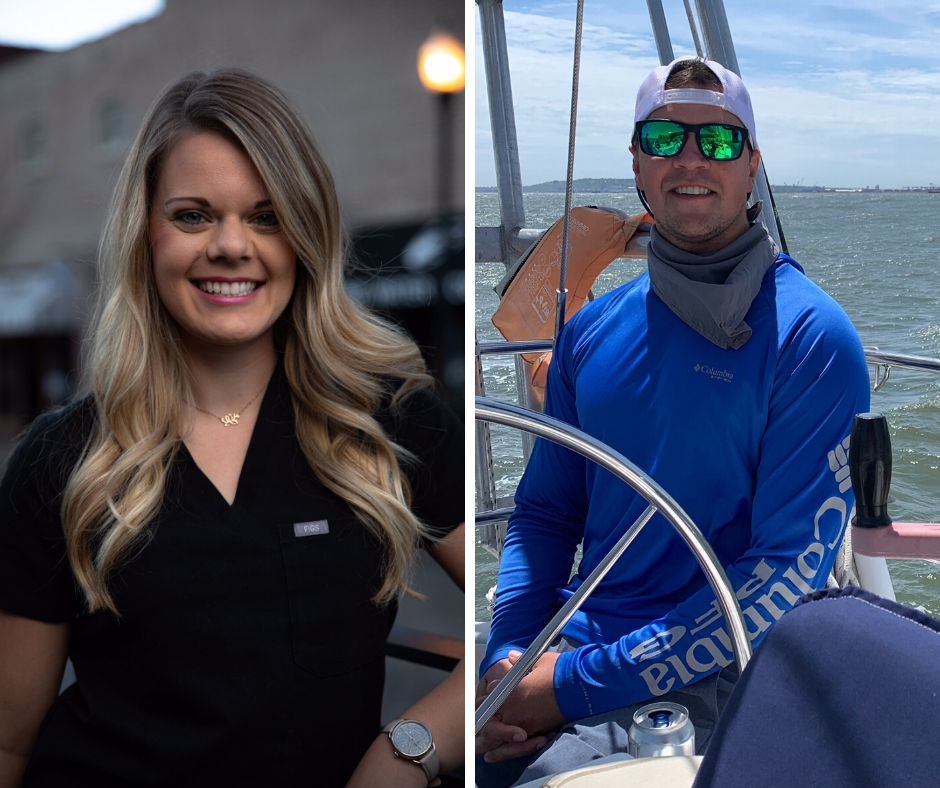 [Editor’s Note: COVID-19 has changed the course of our lives unexpectedly. This story highlights how two WC alumni’s lives changed drastically during this current season. Be sure to check WC’s social media platforms in the coming days to read more stories of how other young WC alumni are navigating the uncertainty and change they are facing.]

The boat, now docked at ONE15 Brooklyn Marina in Brooklyn Heights, went from being a pleasure craft to being a home for the the Hartleys and Thomas Huling (WC ’07). Rachel Hartley and Tom Huling are currently serving as nurses in New York City during the pandemic crisis.

“We liked the name, but considered changing it many times,” Rachel said. “Renaming a boat is quite a process and we never got around to it. Now we believe it to be so relevant. Answering this call we felt so heavily on our lives was a turning point. We’ve seen the faithfulness of the Lord time after time.”

Rachel said mission trips to Jamaica and to the Dominican Republic when she attended Worthington Christian “prepared my mind and heart to respond to such an event as the COVID pandemic.

“A desire to serve was certainly fostered in me from a young age, and supported by WC,” Rachel said. “I learned of the great need and resulting joy of going to hard places for the sake of others. That’s exactly what going to NYC in the midst of COVID requires, and the Lord has given me great joy in doing so.”

Huling and Rachel Hartley walked away from their full-time jobs as nurses in Columbus and Lynchburg, Va. respectively because they felt a calling to help out in NYC.

“It’s in my nature to want to help people,” said Huling, who served as a paramedic and a firefighter for three years before returning to college to earn a degree in nursing. “I didn’t set out to be a firefighter or a nurse, but it’s been something I’ve grown into.”

Rachel believes health care professionals have a certain mindset that allows them to “run toward chaos and danger” instead of running away from it.

“That mindset fueled me to come to this place of crisis and help in the way I’ve been trained,” said Rachel, who graduated from Cedarville University in 2015 with a Bachelor’s of Science in Nursing and will earn a master’s in nursing as a family nurse practitioner from CU this August. “Truly this mindset comes from a desire to serve the Lord and grow in His character. Jesus took on flesh to come into our depraved world to save our souls. That is the perfect example of diving into the chaos for good.”

The pandemic crisis is not the first time the Hartleys have found themselves in the center of chaos in the Big Apple. On May 18, 2017, the two and a couple of their friends were headed towards Time Square when Richard Rojas intentionally drove his Honda Accord into a crowd of people, killing one and injuring 20.

“(After making dinner reservations), we walked out the door to head back to 7th Avenue when all of a sudden we saw a massive blur and heard ‘BOOM, BOOM, BOOM, BOOM! Hundreds of people instantaneously turned toward us running and screaming in terror. It was surreal, like a scene from a horror film.”

The two rushed towards the scene. As they moved closer, they could see Rojas’ car and more than a dozen people laying on the ground.

“I took off running to see how I could help,” said Rachel, who was photographed by CNN comforting a teenager whose leg had been run over. “At the time, I was a charge nurse at Grant Medical Center, a Level 1 Trauma hospital, in the intensive care unit. Insane trauma was our bread and butter.”

Huling and Rachel, who graduated from Worthington Christian four years apart from each other, first met while working at Grant. The two remained in close contact, even after she left Columbus for Virginia three years ago.

Huling was one of the first people Rachel thought of inviting when she was putting together a plan to head to NYC.

“At first, I wasn’t that interested. I wasn’t ready to leave my current job,” Huling said. “I told her, ‘This is not for me. I’m not a huge city guy.’ I had to think about it and read about it for a while before I seriously considered it.

“I was pretty restless for a long time. I was looking for a change … but I don’t like change. If you know you need to change but you don’t like change, you’ll stay where you’re at. After a while, I said, ‘You know what? Why not?’ I always wanted to serve my country, and this was probably going to be the biggest way I could do that. I knew I needed to go.”

A typical day for the duo begins with renting city-provided Vespa scooters and riding them to NYU Langone Brooklyn Hospital. Upon arrival, they find out what floor they’ll be working on and then suit up for a 12-hour shift. Originally, Lagone had only 26 ICU beds in its building, but at the height of the epidemic, the hospital converted five other areas into ICU units.

The two had to adjust to new procedures, policies, and colleagues. Rachel said even walking in the city was a challenge during the first week.

“When we landed in NYC and I first stepped on land, I felt like I was rocking,” Rachel said. “That happens almost every time I’ve gone out sailing, but it usually ceases hours after being on land.

“However, with us going back and forth between the boat and land, the feeling of constant motion on land persisted for a week. It made me look a bit ridiculous, stumbling around because I was just getting my sea legs.”

Huling finds it strange that the largest city in America often feels so empty.

“It’s weird. We got on the subway the other day at 5 p.m., which is normally the rush hour,” he said. “There was no one around us.”

Other adjustments aren’t so comical. One of the lasting images Rachel has is walking past three large tractor trailers that serve as additional morgues for the hospital.

“Seeing those trucks is always a sobering reminder of why I’m here,” she said.

In Huling and Rachel’s world of variables, death, unfortunately, has been a constant. As of May 28, New York had 23,282 deaths, more than the combined total of Australia, Germany, India, Mexico, Kenya and Japan (22,708). New York City provided 16,410 of that figure.

Huling said each victim is not just a number; they’re a person.

“It’s been tough in ways I haven’t expected. Seeing people saying goodbye to their loved ones over and over and over again wears on you,” he said. “It’s hard for families who are stuck at home while their family member is in the hospital. When they come in, they haven’t seen their family member in weeks and he or she has lost 50 pounds and is basically on death’s door. The main reason why they’re coming in is to say goodbye.”

“An experience that I’ve had multiple times, is Face-timing family members to say goodbye to their loved one,” Rachel added. “Afterward I sit with that patient, hold their hand, and pray over them as they pass away. Not having the family or friends is a unique heartbreak. I never dreamed it would become the standard.”

However, the Big Apple has offered random acts of kindness to counterbalance the hardships the two face:

*ONE15 Brooklyn Marina allowed the Turning Points crew to dock for free while in the city;

*The NYC sailing community has been volunteering to do anything from bringing the Turning Points crew groceries to helping with maintenance projects on board the yacht;

*Various restaurants have donated food to medical workers at the hospital.

One of Rachel’s favorite things has been the 7:00 p.m. shout-out New Yorkers give to the health care professionals during the crisis.

“The shout-out has been awesome!” Rachel said. “Truly, the residents of New York come out of the woodworks through open windows and balconies, cheering and clapping, making a ruckus out of thanks…It still gives me chills every time I hear it.

“I’ve been stopped on the street so many times by people thanking me or calling me a hero. I know that is not true. I just hope to be known as a servant if anything.”

Although he was reluctant to go at first, Huling’s glad he listened to the still quiet voice that told him to take the chance.

“I’ll never regret going. If you see somewhere the Lord is leading you, be willing to be used,” Huling said. “I don’t know what tomorrow is going to bring or if I’ll have a job back in Columbus. I’m trusting He has His path for me, and He knows where I’m going. Without that, I’d feel a lot of uncertainty.”