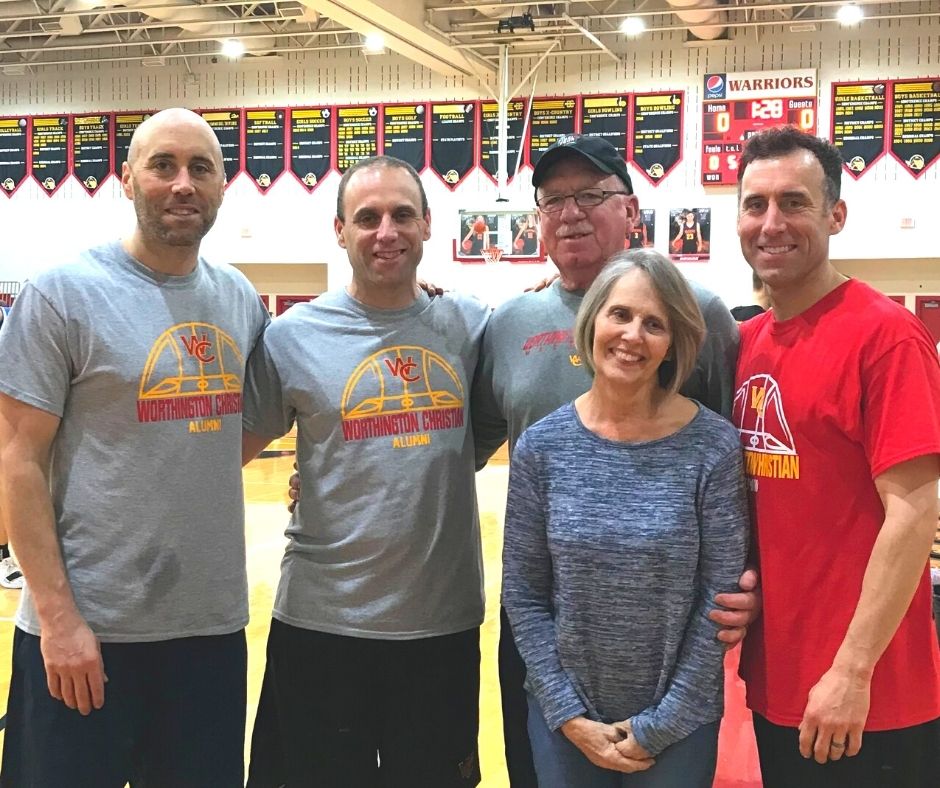 It’s hard to separate the name “Weakley” from basketball at Worthington Christian School. In 1985, Scott Weakley came to WC as a middle school science teacher and girls’ basketball coach. He brought with him years of experience as a teacher, basketball player, and coach. His wife Kathy had been homeschooling their three sons Kevin (WC ’95), Bryan (WC ’97), and Jason (WC ’20). Kathy and Scott shared a passion for ensuring that their sons be raised and educated with a Christian worldview. Having known about WC through friends, it seemed like a great fit for their family. Scott became the boys’ basketball coach in his first years at WC and became the school’s Athletic Director for some years. He transitioned to Capital University where he served as the men’s basketball head coach. His three sons went on to graduate from WC, but not before making history as Warrior athletes themselves.

The Weakleys’ involvement in athletics—and their entire lives—have been oriented around their faith. Rather than just developing themselves and those around them as athletes, they have focused on becoming and inspiring others to become the people God made them to be. For their longstanding impact on others, the entire Weakley family has been selected to receive the Fellowship of Christian Athletes’ award called “Rooted in Excellence” and will be honored in an upcoming event sponsored by FCA and Athletes in Action (AIA). This “Rooted in Excellence” event will be an annual gathering to honor a family who has had a sports and Kingdom impact in Central Ohio, and the Weakley family has been selected as the first recipients.

Central Ohio FCA staff member Tim Brown knows the Weakleys through his role with FCA over the last 20 years, but he also knows the Weakleys on a more personal level. Brown’s son TJ (WC ’04) attended WC and was on Kevin’s team as a player during his first year as the Warriors basketball coach. Brown says of the Weakleys being honored, “The Weakley family has been an example of godly excellence both on and off the court in Central Ohio for over four decades. They have been a shining light in Central Ohio as players, coaches, and mentors to thousands of young men and women in the area…who better to receive the first ‘Rooted in Excellence’ award?”

The emcee for this special celebration of the Weakleys will be former Ohio State University basketball standout and CBS sports announcer Clark Kellogg, and the evening will feature testimonies from three men with close ties to the Weakleys and to Worthington Christian School: former NBA player (who attended WC for two years in high school) Lawrence Funderburke, WC alumni and current teacher Jason Dawson (WC ’06), and former Worthington Christian Athletic Director Kent Homoelle. Proceeds from the event will be used to support FCA summer camps, as well as Bryan Weakley’s current work with AIA.

Scott Weakley expresses his gratitude for this honor being bestowed on his family, and he is quick to point to the many people who have poured into them so that they, too, could invest in others. Bryan echoes this sentiment, “I could name 100 people—faculty, friends, coaches, and more—from Worthington Christian who have shaped me into the person I am today.” He speaks of his mother and father’s faithfulness to each other, to God, and to demonstrating God’s love to others. He sees this “Rooted in Excellence” event as a celebration of the long-lasting relationships they have made.

To learn more about this event visit the Central Ohio FCA’s web page for more details.