WEATHERING THE STORMS OF LIFE 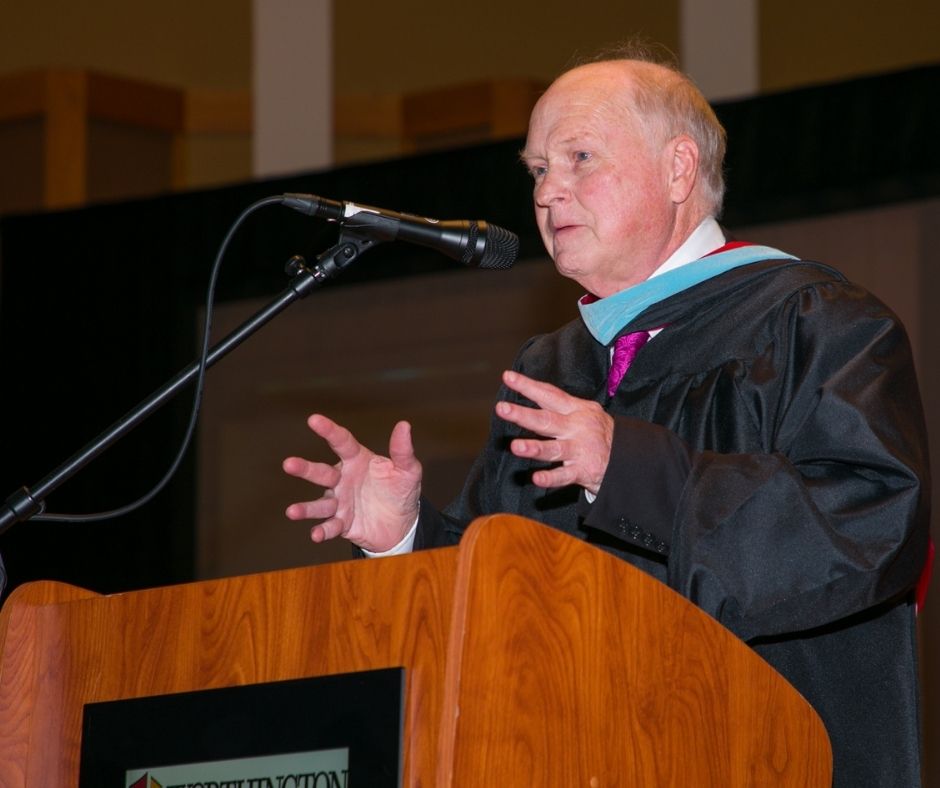 The name Mr. Iten has echoed in the hallways and hearts of students at Worthington Christian School since 1986. He is beloved by his students, and with good reason. As a Bible, History, and English teacher, his academic and biblical knowledge are evident. A gentle countenance, a tender-hearted spirit, and a sensitivity to his students’ souls are among his most notable traits. He has been dedicated to loving his students as Christ loves them and challenging them to think and respond to what they learn in his classroom. He has been present at all kinds of student activities—sporting events, plays, concerts—and is perhaps one of the most visible faculty members at student events.

These qualities certainly contribute to him being so loved by his students, but there is something much deeper that seems to draw people to him. He has an honesty and authenticity about him that permeate everything he does. When things are sad, he weeps. When things are happy, he laughs. Dr. Buzz Inboden, Upper School principal and long-time colleague of Iten explains, “There is something profoundly influential about an adult who is emotionally real, especially about things of the LORD.” This other-worldly realness that Iten possesses is the result of a lifetime of walking with the LORD and allowing the Spirit to shape who he is, in all of life’s circumstances.

This fall, Iten’s life circumstances changed drastically. He noticed his health declining over the past few months. Numerous doctors’ appointments and tests revealed that he has liver cancer, with a prognosis of four to six months. His retirement was announced in November and he was able to pay his classes one final visit in early December. He is approaching this last chapter of his life in much the same way as every previous chapter—walking step by step with Christ, embracing all that God has for him in it.

A phrase that Iten often shares with his students is, “If you’re not in a storm, one is coming.” He regards the in-between times—those seasons of calm—as crucial periods of preparation for the next storm. “If you wait ‘til the storm hits, it’s too late to prepare,” he explains. He asserts that we must allow God to do His work in us so that we are ready for whatever comes. For him, this is not a platitude, cliché, or pessimistic warning to his students, but a truth that he has experienced and lived.

Iten grew up in St. Louis, Missouri. For all intents and purposes, he had an ideal childhood. Godly parents, many close relationships with friends and family, a wonderful neighborhood, a Christian education through middle school, and active, engaged high school years. He describes his early years as grace-filled. His first significant “storm” came rather unexpectedly in his college years.

Attending a Christian university, he anticipated a continuation of his grace-filled childhood. He recounts that his college experience was instead a jolting confrontation with racism and legalism. He spent his college years wrestling with what a Jesus-follower’s life truly ought to look like in comparison to man-made rules. This process of spiritual wrestling and growth continued for him as he began his teaching career at Gahanna Lincoln schools after college.

He taught at Gahanna Lincoln schools for over 10 years. During his time there, he taught English and coached basketball, baseball and soccer. It was also during this time that he and his wife had two sons, and their family helped to plant a church in Hilliard, Ohio. Iten took part in leading Bible studies and occasionally preaching at the church-plant. He credits his Bible-teaching experience and strong Christian community at that time with preparing him for the biggest storm of his life that was getting ready to hit.

In 1980, Iten’s wife divorced him. Left with his five- and nine-year-old sons as a single dad, he was devastated. He and his boys moved to Greeneville, South Carolina, to be near his parents for support. He worked as an assistant principal at a school there for one year before venturing into textbook-writing for Bob Jones University Press. After a few years of writing textbooks, he began to search out what his next steps might be. He was interested in attending seminary and entering full-time church ministry, but he knew that would be a challenge as a divorcee and single dad. He was also interested in returning to teaching, but he didn’t know where or how. Through a series of “coincidences” that could only have been orchestrated by the Holy Spirit, he was called in for an interview for an English teaching position at WC in 1986. He got the job, and he and his boys moved back to Columbus shortly thereafter.

As he started his tenure at WC, he recalls it being a “big blessing” to have had the same schedule as his sons, so that he could provide for them and take care of them. Compared to his previous teaching experience, he quickly came to love the “team” atmosphere of his fellow teachers, all sharing a common faith and purpose. He taught Bible and history some years, but his preference is English because he “gets to teach all three subjects at the same time.” He never imagined that he would teach seniors (“by that point, they’re not interested in school”) but has learned over the last many years that he loves teaching seniors, and they are in fact quite willing to learn.

In 2009, Iten had to step away from his beloved teaching role to become a full-time caregiver to his mother. While some might consider this drastic change a “storm,” Iten recalls this as a sweet time in his life. They were able to enjoy four years together before she passed away in 2013. Later that year, Iten accepted an invitation from Dr. Buzz to return to WC’s faculty. Though he describes teaching as having its fair share of “stormy” days, the tears that well up in his eyes every time he talks about his students make it abundantly clear that he is passionate about his life’s work.

Facing the final chapter of his life, he (again) does not consider this diagnosis a “storm”—he explains that this is the end of a journey that he has always walked step by step with Christ, so there is no fear or defeat in it.

And as he reflects on this walk, he has a unique, almost bird’s-eye view of God’s work. He explains, “So often we see the struggles in our lives as negative or ‘bad,’ but those are actually the good things that God uses to mold us into His image.” This is not just a passive resignation or acceptance of the challenges of life but an active embracing of what God has for us in every season. And this has been his aim in each of the storms he’s faced.

Iten credits the challenges he faced as a college student with helping him to develop courage and a passion for speaking the truth in love, then backing it up with his life. Wrestling with institutional racism and legalism also helped him to move “beyond indifference to empathy” for others. Through being broken by the experience of divorce, Iten says he became totally dependent on Christ and found a deep sensitivity toward others who are hurting. That season taught him in a profound way that God loves us no matter what and can use us not matter what, that only what God says ultimately matters, and the necessity of being obedient to God day by day.

Iten contends that the life of genuine discipleship is the hardest to live, but “it is worth it…totally worth it. He can take the worst possible things that happen to you and make them into the greatest blessings. His grace is sufficient.”

We would love to collect memories, stories, and tributes to Mr. Iten and the impact he’s had. If you have a story, memory, or tribute, and/or photo that you’re willing to share, please take a moment to do so on this tribute page.

Mr. Iten is a prolific writer. To read his writings, be sure to check out his Facebook page and personal blog.