A DIFFERENT TYPE OF HORSEPOWER 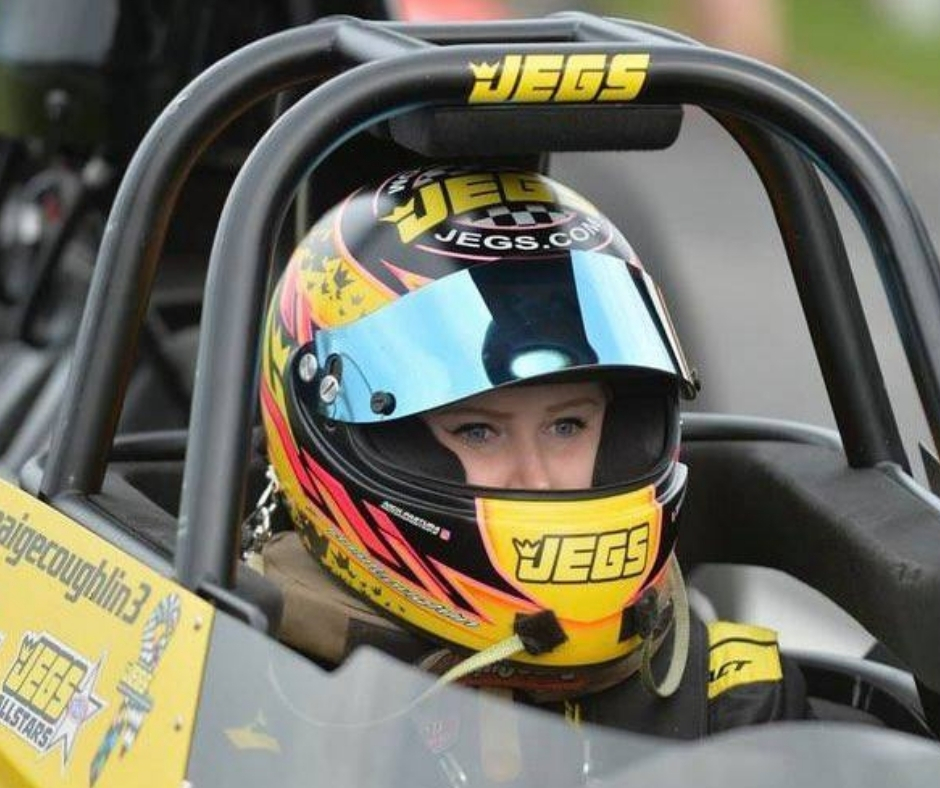 Coughlin, a former horseback rider, now is making waves as a drag racer

Paige Coughlin (WC ’18) knew she was in trouble when she saw the red, white, and blue lights of the police cruiser go off behind her on one of her trips back from Miami University to Columbus last year.

The officer approached the driver’s side door, saying something like “Do you have any idea how fast you were going?”

Had she been asked on any other weekend, Coughlin would have been able to tell the officer down to the nanosecond. As a drag racer for Jeg’s.com, the Worthington Christian graduate is accustomed to going over 180 miles an hour.

“I have had a few speeding tickets but most of them happened before I was 18,” said Coughlin, whose top speed on the track is 187 miles per hour. “It’s a very different atmosphere (driving on the highway to driving on the track). On the highway, you’re worrying about other drivers and different types of vehicles and you have all sorts of signs to follow.

“When you’re on the track, you’re all strapped in and have all sorts of safety equipment on. All you worry about is going from Point A to Point B in the fastest, safest way possible.”

Coughlin’s family tree has several oversized tire swings hanging from its branches. Her grandfather Jeg Coughlin Sr. is a member of the Drag Racing Hall of Fame and her father Troy is a three-time Pro Mod champion while several family members are part of the drag racing community.

In 2020, Paige earned the most points in her class in the North Central Division and represented Division III at the Jeg’s All-Star event as a part of the annual Route 66 NHRA Nationals at Lucas Oil Fieldhouse in Indianapolis. She lost in the first round of the all-stars but she ended up placing in the top 10 of a separate Super Comp race during the nationals.

“(Losing in the first round of the All-Star event) brought me back down to earth really quickly,” said Coughlin, the youngest female to compete in the Jeg All-Stars event. “I was just thankful we were able to swap out parts from one car and get them into another and to be in the final 10 cars in the other race.

“That is the work of the amazing people I am with. Not a lot of people can say that in two hours they can strip all the parts of one car and get it into another car. It’s a lot of time and work, but they are very dedicated.”

For most of her life, the Miami University senior felt more comfortable in the saddle of a horse than behind the wheel of a dragster. Coughlin and her sister Kelly Jo (WC ’20) began horseback riding when they were six or seven years old.

During the elementary and middle school years, the two trained five days a week and traveled to Kentucky, Tennessee, Florida, and New York every other weekend to compete. At the height of their involvement with horses, the two trained and competed in Florida three months out of the year.

The pair’s top achievement was competing in the Pony Finals in Lexington, Ky.

During that time frame, Coughlin began slipping behind the wheel of a dragster. She called her first attempts at racing an “out of the body experience.”

“I had never experienced anything like that,” she said. “When I started going faster and faster, my stomach dropped. It was kind of like going down that first hill on a roller coaster.

“But you get used to it. It almost becomes second nature. Now getting into the race car right before that initial launch is calming to me.”

When it comes to drag racing, success is more determined by trigonometry than Talladega Night machismo. In her class of super comp dragster racing, winners are determined by a goal time of 8.9 seconds in a quarter-mile. The driver who comes closest to hitting that time wins.

“You have to program your car to keep the throttle closed to a certain point, say two or three seconds into the run and then you open it up,” she added. “If you keep it open too long, it’s going to run faster than 8.90 seconds. You can run 195 miles per hour and still lose and run 160 mph and still win.

“It’s definitely a lot more math than people think it would require. You must anticipate your reaction times and understand how the weather, the track conditions, density altitude, barometer, and all those other aspects play a role in how you get your car from Point A to Point B.”

In her career, Coughlin has seen women make major inroads in her sport with the rising success of drivers like Erica Enders and Angie Smith.

“When drag racing first started, it was a very masculine sport,” Coughlin said. “It’s really exciting to see the number of women getting involved with the sport.

“Everyone races together, whether you are a man or a woman. You put the helmet on the same way and race.  The racers treat each other the same way. When you put those win lights on, it doesn’t matter (what sex you are).”

The road to the top echelons of drag racing is fraught with setbacks. One season, Coughlin’s team had some sort of equipment failure in nearly every race. Another time, she missed finishing first by .006 of a second.

Coughlin credits her education at Worthington Christian with helping her find a way to handle setbacks on the track and in life.

“Those were really hard moments, but Worthington Christian set me up to handle those kinds of situations,” she said. “If I didn’t have that background, I wouldn’t be able to handle it.”