A HOME RUN OF AN IDEA 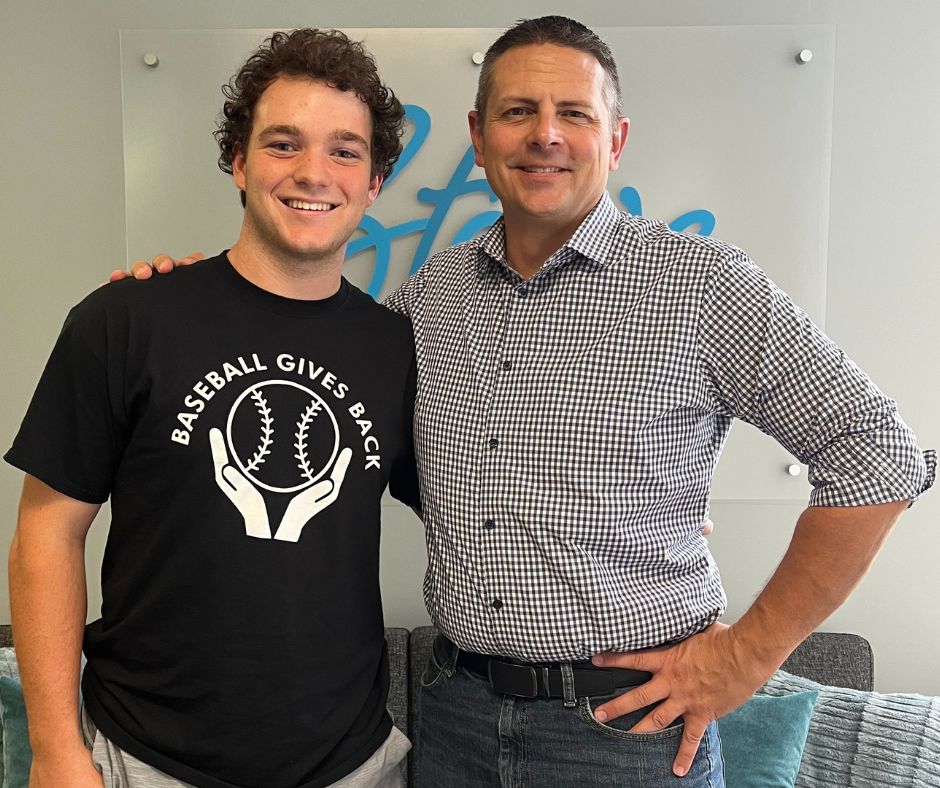 “I hate baseball—my mom just signed me up for this,” a young boy exclaimed to Worthington Christian Senior David Murawski as he arrived for Worthington Christian’s first ever “Baseball Gives Back” event this summer. Though these were not the words Murawski was expecting to hear given the months of preparation he poured into making “Baseball Gives Back” a reality, it was not the first surprise he encountered in his journey up to that point.

The entire notion of “Baseball Gives Back” was unexpected for Murawski from its start. As a junior at WC in the 2021-22 school year, he decided to take Entrepreneurial Incubator with Upper School Business teacher Nick Johnson. This course is structured on the premise that its students develop an idea for a business, then learn and practice the steps for developing their business idea. Murawski brainstormed many ideas for his class project, but he kept returning to one idea that was a little unorthodox considering the assignment. He wanted to organize and carry out a free baseball clinic that would be open to the community. He explains his inspiration for the idea, “I know there are kids in the local community that do not have opportunities to learn about or play baseball, and they may not have access to summer camps. I wanted to create a chance for anyone to participate.” Presenting a convincing ‘pitch’ to Johnson, Murawski received approval to move forward with his idea.

Despite not being a for-profit venture, Murawski took steps in planning his idea utilizing the principles and processes he learned in Entrepreneurial Incubator. He drafted a proposal, made lists of what and who he would need to help make it a success, and began networking. He contacted WC staff to help him gain use of the school facilities for the event, develop a registration page for participants, and set up a waiver form for the registration process. All the plans started to come together in the spring of this year, but Murawski sensed that his idea might have even greater potential to help others than he originally anticipated.

While at his home church at LifePoint, he learned of a faith-based inner-city ministry in Columbus called Stowe Mission of Central Ohio. He felt inspired by the ministry’s mission and wanted to find a way to support it through his free baseball camp idea. Staying committed to his mission to provide a free clinic for all participants, he decided that if any registrants would want to make a donation for their involvement, perhaps any donations received could support Stowe Mission. He contacted the ministry’s Director of Development Brad Harris and explained his project and hopes for collaboration. Harris loved the idea and agreed to set up an easy way for people to donate to Stowe Mission on behalf of the baseball clinic via the ministry’s website.

Nearly two dozen elementary and middle schoolers registered for the clinic. The registrants not only came from WC, but also from several area school districts, many of whom heard about the clinic through word-of-mouth and Murawski’s extensive network with local baseball leagues. As the registrants came in, so did donations from the community. Bat Flip Baseball assisted with advertising the clinic, Play It Again Sports donated equipment for use during the clinic, and monetary donations were generously given by The Columbus Foundation, Shamrock Family Eye Care (Dr. Bryan Delmore), and Salaita Orthodontics (Dr. Salaita)–all directly contacted by Murawski himself.

When the week of the scheduled clinic came around mid-June, the weather offered another unexpected twist to the event. Rain the day before the clinic meant that the baseball fields were unusable, but Murawski was undeterred by it. He and his crew of volunteers (WC Upper School Principal and Varsity Baseball Coach Tim Kraynak, WC alumnus and professional baseball player Steve Stanley, and various WC baseball players) decided to move their planned activities to the school’s turf field and moved all registrants to the afternoon session rather than splitting them into two separate sessions, morning and afternoon.

During the clinic, players learned baseball drills, listened to an inspiring talk by Steve Stanley, and practiced their batting skills in the newly finished Jameson Colley Batting Cages. The afternoon culminated with a friendly game of whiffle ball in which players slid into home plate on a slip ‘n slide. Murawski fondly recalls that the same boy who had explained his lack of interest in baseball at the beginning of the clinic was all smiles by the end of the day, explaining, “It was clear he had so much fun—he was one of the last kids to leave.”

Reflecting on the experience from preparation to completion, Murawski shares in the joy that reluctant camper discovered that hot June afternoon. He shares, “This whole process was amazing; it’s one of the most fun things I’ve ever done.” The impact of this clinic does not stop with these two young men and the joy they experienced.

The community donations that Murawski was able to secure through his persistent effort and intentional networking have made a remarkable impact on Stowe Mission of Central Ohio. Donations totaled $6000. Brad Harris, Director of Development for the ministry, explains that this amount of raised money is “amazing.” He also shares, “David is a phenomenal young man. The clinic itself was obviously well-organized, and it was clear that he cared for the kids that attended. Raising $6000 is phenomenal, and his efforts are easily one of the top three outside fundraisers we have ever had.”

Not only is Murawski already planning to host another “Baseball Gives Back” event in the summer of 2023, he has also decided to intern with Stowe Mission this fall as part of WC’s Internship Academy. He will work closely with Harris and other Stowe Mission staff to learn the ins and outs of non-profit work and inner-city ministry. Murawski explains, “The ‘Baseball Gives Back’ experience has helped me realize what I want to do.”