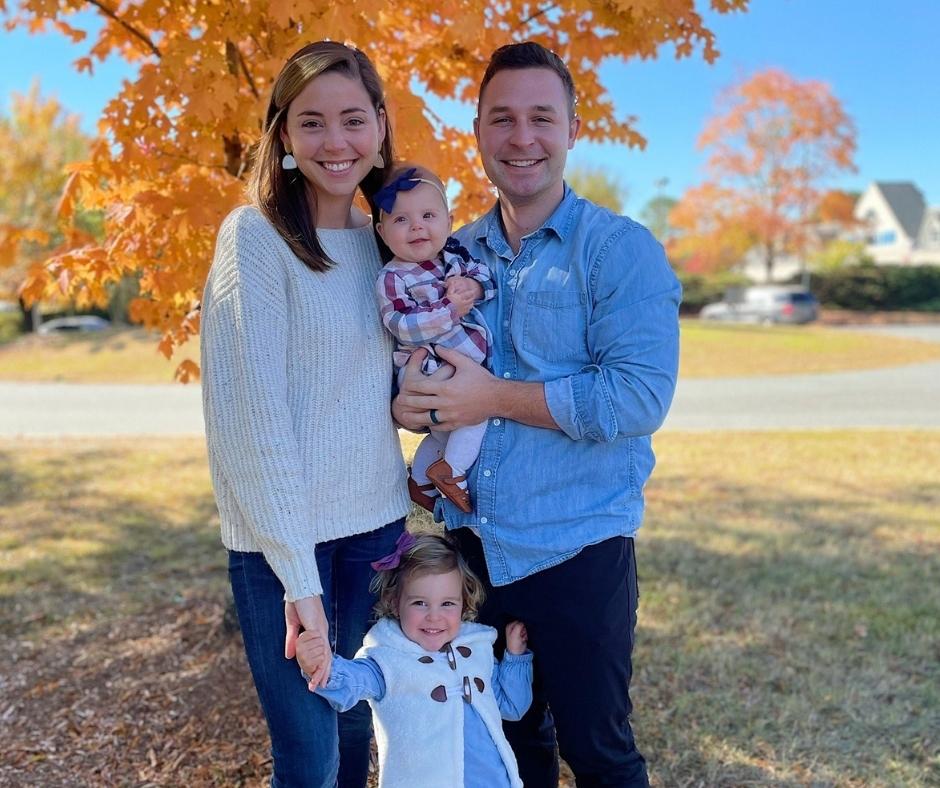 Starting a family in North Carolina wasn’t in the Petrel’s plans. Trusting in God, a new church helped them adjust.

After growing up, meeting up, and dating while attending Worthington Christian School, Josh (WC ’11) and April (LaMonte) (WC ’12) Petrel could not imagine living anywhere else but Ohio.

All of that changed six years ago. After Josh and April, both earned undergraduate degrees from Cedarville University, and Josh completed an MBA degree in business administration from Liberty University, the two packed up and moved nearly 500 miles south to Charlotte, N.C.

Josh, who works as a manager in Premier Inc’s supply chain consulting practice, and April, who is a NICU nurse for Novant Health, said the faith that began to take root while the pair was in high school now sustains them in the Tarheel state.

“When we left Columbus for Charlotte in 2016, we didn’t know anyone,” Josh said. “As a newly married couple, making a transition from complete familiarity to not knowing anyone in a new city is hard.

“Most of our family still lives in Columbus and not having them around can be hard, especially with kids. But God has been so faithful to provide us with a church community that we view as family.”

Married in 2016, the couple is raising two girls, Jane (2) and Quinn (1). April said the key to making the transition to the new location has been finding a solid church home in Mercy Church.

“We are passionate about our church,” she said. “God has been so faithful in providing a church community for us here in Charlotte. It has played an essential role in our spiritual growth, as well as providing a community for our family. We can’t imagine our life without Mercy Church in it.”

“Dr. Buzz let me ‘sit in’ on his eighth-period theology class for an entire semester because he knew I wanted to date my now wife,” he said. “I wasn’t even enrolled in the class. Ultimately, he knew I needed someone like April in my life…and man, was he right. (Dr. Buzz, I hope all is well, and congrats on retirement.”)

While they may have been in the same class, April and Josh were on separate pages in their spiritual walk. April accepted Christ at a young age and was developing in her faith while she was in high school.

Josh, on the other hand, admits he was more of a late bloomer spiritually.

“Truthfully, I did not place my faith in Christ until college. I quickly learned that being around Jesus by going to church, and attending a Christian school is not the same as knowing him personally,” he said. “God was so faithful to give me April and quality friends in college who helped me realize that being around Christianity doesn’t equate to actual repentance and belief in Jesus.”

When they decided to tie the knot, the couple turned to their former teachers, Tom and Christie Burns, to help prepare them for that sacrament. The Burns served as their pre-marital counselors and officiated their wedding.

“Tom was a mentor to me while I was in high school and he had a huge impact on both April and me,” Josh said. “Both he and Christie have remained good friends and we would not be where we are today without our relationship with them.”

“Looking back, WC was exactly what we each needed at that point in our life,” April added. “We both needed to be in a culture that encouraged us to walk with the LORD. We got that through our friends and teachers at WC.”