ALUMNI IN THE ARTS: ALLI NATHAN 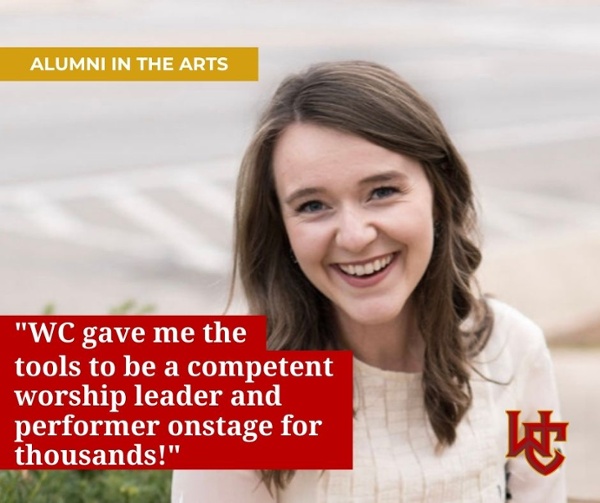 Alli (Butterworth WC ’11) Nathan remembers herself as a “wallflower” as she began her high school years at WC. But by the time she graduated in 2011, she explains that she grew into a person who could express herself in front of others, especially through music. In addition to fostering her relationship with the Lord through those years, she credits her involvement in WC’s music and theatre programs with drastically shaping her as a person.

At WC, Nathan was involved in every vocal musical opportunity available–every female ensemble, mixed choir, and chorale, and even served as the choir president her senior year. She was also involved in musicals and plays all four years of high school, including the productions of “You’re a Good Man Charlie Brown,” “Godspell,” “Cotton Patch Gospel,” and starred as Belle in “Beauty and the Beast.”

Following her WC graduation, Nathan attended Cedarville University and earned a Bachelors of Music, crediting the arts at WC with heavily impacting her choice in major. At Cedarville, she assisted in starting their first ever student-led acapella group, The Inversions.

Following her years at Cedarville, she was hired as a worship leader intern with Dannah Gresh’s ministry, Secret Keeper Girl (now called True Girl). She travelled across the United States and Canada from church to church in a tour bus putting on these conferences involving music, drama and fun. She says of this experience, “So much of what I learned from Dave O’Roark [WC Theatre Director] and Karen Klapheke [Vocal Music Teacher] came into play in working with that ministry. They truly gave me the tools to be a competent worship leader and performer onstage for thousands!”

Nowadays, Nathan is involved in leading worship with her husband Danny Nathan, another 2011 WC grad, and the music director at Grace Polaris Church. She works at Grace Polaris in assisting with the Women’s and Student ministries, and has also recently begun teaching contemporary voice lessons part-time.