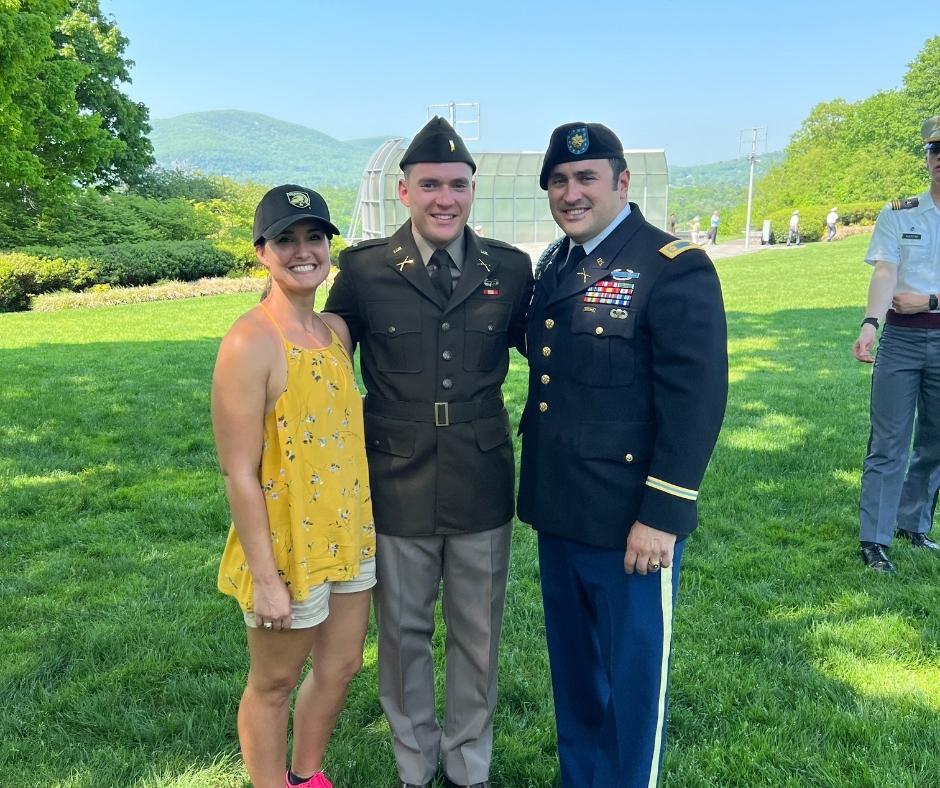 By the time he threw his white cap in the air to celebrate his graduation from the United States Military Academy on May 21, Ethan Burby (WC ‘16) didn’t just feel prepared for battle. He felt like he had been through a war.

The Worthington Christian graduate faced an uphill climb just to receive an appointment to West Point. Every time the door to the military academy appeared to be locked, Burby kept knocking on it until eventually, the door fell open.

“I had multiple roadblocks on my way to West Point,” said Burby, who was turned away twice by the USMA before finally receiving an appointment. “I don’t know if I would have been able to get through those hard times and roadblocks if it wasn’t for my faith, my family, and the people I have around me.”

One of the factors that kept him on this path was his grandfather, Lester Bennett, who graduated from West Point in 1957 and served in the military.

“I’d follow my grandfather around the house and wanted to know more about his military career,” he said. “However, it wasn’t until I was older that I realized the leadership qualities he had were the same ones I wanted to see in myself.”

Throughout his time at Worthington Christian, Burby said his teachers and peers had to look pretty hard to see those qualities. He admits he was more focused on golf and basketball than he was on his studies.

By his junior year, Burby became disenchanted with his golf game and began reevaluating where he wanted to go to college.

“For the first time in my life, I just felt a calling to serve my country,” he said. “There were really two options, at least in my head, either to go the ROTC route or go to West Point.”

Deciding to attend West Point one’s senior year of high school is kind of like trying to get a Division I college football scholarship after playing the sport for one year.

According to CollegeSimply, earning an appointment to West Point is comparable to getting accepted into Harvard. West Point only takes 8 percent of its applicants while Harvard accepts five percent. However, Harvard has over 30,000 students while West Point has only 4,536. West Point candidates must receive a nomination from either a congressional or military source, pass physical fitness tests, and meet community service and academic requirements before receiving an appointment.

When he first applied for the USMA, Burby was turned down. He and his father Rick (WC ’79) researched how he could reapply and be accepted.

The solution appeared to be Greystone Preparatory School, a one-year prep school in Kerrville, Texas. The school offers a broad range of academic classes like chemistry, algebra, and calculus, but also has physical training six days a week and leadership book studies every weekend.

“Everything we did there was meant to develop us as leaders and scholars and improve our overall application to the military academies,” he said. “We worked on our interviewing skills so we would know the best way to answer their questions. It was a very tough one-year program.”

During that year, Burby improved his standardized test scores, earned a 4.0-grade point average, and worked himself into the best shape of his life.

And in the end, it wasn’t enough. His application was denied. Again.

“There were about 40 students in my class at Greystone and everyone has the same goal: to get into one of the four major academies,” Burby said. “You know they’re all putting in the same amount of work in classes and the physical fitness.

“Then you get down to the end of the year, almost all of your classmates are getting their acceptance letters. When I got that rejection letter, it was definitely a gut punch. I felt like I had done everything I needed to do to get in. Obviously, they didn’t feel that way.”

Burby felt that maybe his options had run out. His commander at Greystone, David Bailey, saw the potential in the Worthington Christian grad and offered him a chance to return to Greystone and serve in an executive officer leadership position.

Burby took nearly a month to decide to return to Greystone.

“I knew it was going to be just a grind: multiple tests, training, and going through the whole application process again,” he said. “I felt like it was something that God was leading me to do. I wasn’t willing to give up on that so easily.”

When he finally received the phone call saying that he had been accepted at the end of that second year, Burby remembers breaking down emotionally.

“After three years of trying, I finally got in,” he said.

Burby’s delayed entry made for an interesting first year or plebe year at West Point. The school is famous for breaking students down and building them back up into the image of a soldier.

Plebes have all their hair shaved off, are taught the basics of being a soldier, and endure continuous harassment from upperclassmen. They must take out the upper classmen’s trash, pick up and return their laundry, and clean the barrack restrooms.

At one point, they are not even allowed to leave their room without having an upperclassman walk them around and are prohibited from speaking outside the barracks.

“That first year, I was at the bottom of the totem pole,” he said. “I had upperclassmen who were my age or maybe a year older screaming and yelling at me. It was kind of odd at first, but you get through it.

“At times, it seemed pointless and you get pretty sick and tired of it, but you recognize all the other classes have gone through the same stuff you’re going through. The school is trying to develop you into the leader they want you to be. To learn how to lead, you have to learn how to follow.”