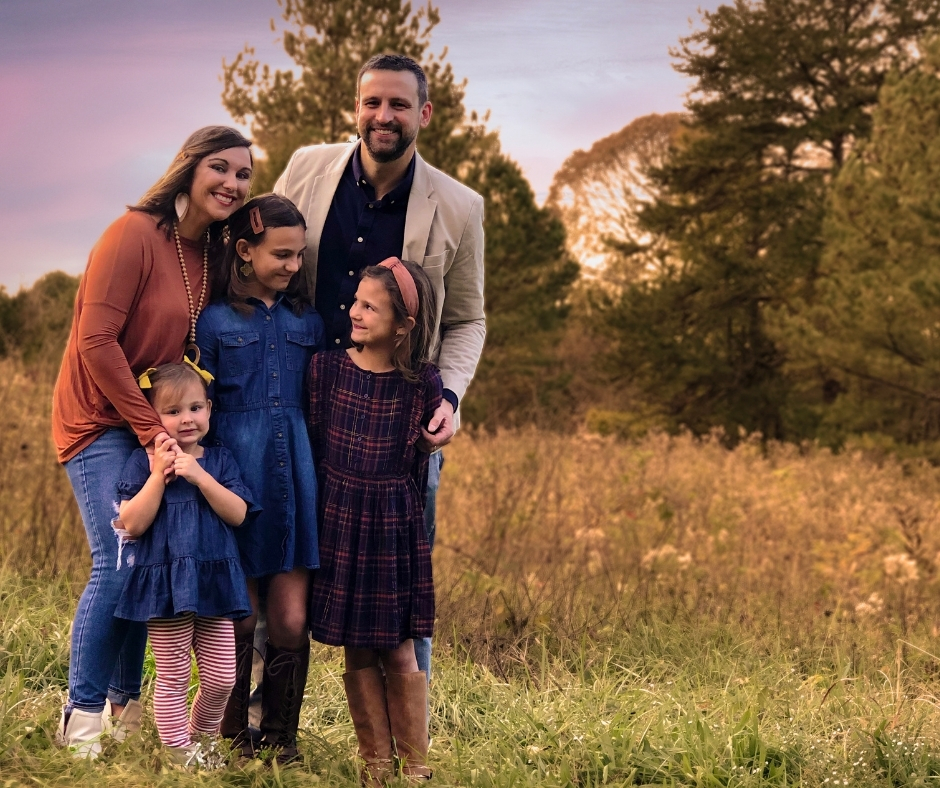 Emily (Arnold) Jordan (WC ’02) is the first to admit she struggled with the COVID-19 lockdown. The pandemic forced her into a four-month furlough from her job as a communication specialist for Primrose Schools Franchising Company.

“Outside of being on maternity leave, this is the longest I’ve ever been out of work,” said Jordan, who lives in Dallas, Ga. with her husband Kris, and her daughters, Laya (10), Hannah (8) and Abby (3).

“After getting over the initial shock, I can honestly say the nationwide lockdown and my subsequent furlough was a time of beautiful interruption.

“I forced myself to slow down and enjoy my family. I had to challenge myself to delight in God and his blessings instead of focusing on my temporary problems and circumstances.”

Since 2006, the gear shift of Jordan’s life only had one speed: full throttle. After graduating from Harding University with a Broadcast Journalism degree, she dove headfirst into the world of broadcast news. She was first hired by WBBJ-TV in Jackson, Tenn. as a producer and an assignment desk editor but she was quickly promoted to reporter/anchor.

For a town of nearly 67,000, Jackson produced a fair amount of big news events. In 2006, a tornado destroyed several buildings including a dormitory at Union University located in Jackson. In 2008, the Worthington Christian graduate reported on the Mary Winkler murder trial. Winkler killed her husband Matthew, a minister at the Fourth Street Church of Christ but a jury found her guilty of voluntary manslaughter after she testified about suffering years of verbal and physical abuse.

“I spent three years working as a ‘one man band’ reporter/anchor,” Jordan said. “Small market TV stations are a steppingstone for journalists. Most aspiring reporters and producers stay two or three years and then move on to a larger market.”

Jordan was hired as a producer for NewsChannel 5, the station where Oprah Winfrey started her broadcasting career, in Nashville, Tenn.

The 2010 flood of the Music City was one of the most significant news stories Jordan was a part of covering. Jordan assisted the main producer during the evening newscasts as nearly 20 inches of rain fell on Nashville and the Cumberland River crested at 52 feet.

“I’ll never forget watching a feed from traffic camera as floodwaters swept an empty portable (module) from a local Christian school off its foundation and floated down Interstate 24.”

Little did she know, her own station would become one of the stories on the evening news in less than 24 hours. Hours after she went home for the evening, flood waters surged through the lower level of the NewsChannel 5 newsroom.

“When I turned on the news coverage the next morning, I was in disbelief,” she said. “(There were) our photographers and live truck operators wading through floodwaters to rescue anything they could find from our newsroom desks

“As devasting as it was to watch my own workplace and team become a part of the news, I was so proud of how they recovered from the flood. It was also inspiring, to be in Nashville the weeks and months following the flood as the entire city came together to help those in need.”

While Jordan was a producer, NewsChannel 5 shot up to the number one local 4 p.m. newscast in the United States. At the same time, the pressure to perform at such a high intensity level took its toll.

“When covering local news, you either get to meet people during the best day of their lives or the worst day,” she said. “Too often, it is the worst.

“While I loved my teammates, the constant pressure to perform, exceed ratings and find the next lead story was just too stressful. I knew I needed to make a career change so I could spend more time with my family.”

After moving to Atlanta in 2014, Jordan was done with broadcasting but struggled thinking about how her skills might translate to the corporate world. Like many former journalists, she made the move into public relations and found a perfect spot with Primrose Schools Franchising Company’s public relations and communications department.

Jordan’s role is to manage, plan, write and present content within the company, running two newsletters, a monthly magazine, and conducting a quarterly webinar for franchise owners and school directors. Currently Primrose has more than 400 schools in 32 states for children from six weeks old to elementary. She had been with the company for five years when the pandemic shut the school systems down.

“It was heartbreaking to watch as the world shut down, schools closed and then childcare facilities followed,” Jordan said. “For three months, I was in limbo, not knowing if my role would be saved or not.

“As a woman, we’re taught at a very young age, we can ‘do it all’ and have a successful marriage, family, and the career we always dreamed of. I’m all for finding a passion/talent and pursuing dreams. The problem is while we are striving to be ‘great,’ we are only focused on ourselves. We become consumed with self-empowerment and forget to think of others above ourselves. We forget how much we desperately need the God of the universe.”

In the time away from the working world, Jordan reorganized her priorities.

“Those few months were a true gift,” Jordan said. “I was able to stop running the race for approval and truly focus and rest in who God says I am. My marriage, my girls, and my career are all amazing blessings in my life, but they do not define who I am. If I do not know who I am in the eyes of God, I will instantly crumble when/if those identities are stripped away.

“Something big happens when we toss aside our striving ‘to be great’ or ‘good enough’ and rest in God’s power. We find joy and peace.”