Home » Alumni News » BEHIND THE WHEEL 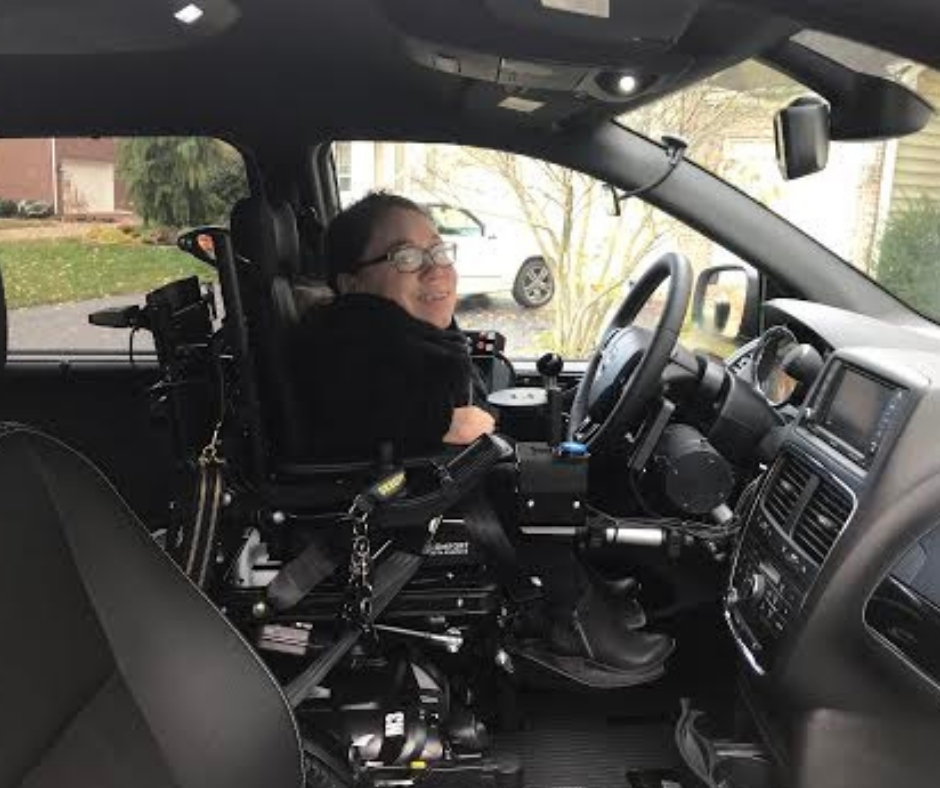 After six-year pursuit of a license, Bibler enjoys freedom of driving

For most high school students, taking driver’s ed and obtaining a learner’s permit is that all-important first step in getting a driver’s license. Hannah Bibler took that step at least three times before finally earning her driver’s license in November 2019.

“In total, I took the learner’s permit test three or four times because my permit kept expiring,” said Bibler, who is paralyzed from the chest down. “Finally getting a driver’s license means the world to me. Even before I became paralyzed, I have always dreamed of being able to have a car and drive.

“I always strive to live my life as anyone else would, I just have to put in a little more effort in finding ways to adapt.”

Bibler, who will graduate with a bachelor’s degree in marketing from Wright State University in December, was born with Morquio Syndrome. The rare metabolic disorder keeps the body cannot process certain types of sugar molecules called glycosaminoglycans that lead to the development of bone, cartilage, eye corneas, skin, and connective tissue. In the 2016 Worthington Christian graduate’s case, the defect led to skeletal abnormalities, hearing loss, a heart murmur, eye issues and affects other body functions.

“Morquio Syndrome has affected my legs,” said Bibler, who has had four leg surgeries. “I used to be able to walk but I would get really tired so I wasn’t able to walk long distances. “In August 2011 I had ankle surgery and when I came out, I was completely paralyzed from the chest down.

“I spent three months in the hospital and a full year in physical therapy. I am able to move around and sit up on my own but I don’t have any stomach/core strength to walk. I also have no control over my bladder and bowels.”

While the birth defect has hindered Bibler in many ways, she was determined not to let it take away her dream of driving. She and her mother Anne (Raikes) Richey (WC ’88) traveled through Ohio, Indiana, and finally Pennsylvania before finding a facility that could meet her requirements for driver’s training and testing.

When she was 16, Bibler was evaluated and met the protocols for driver’s ed at The Ohio State Medical Center. However, the center didn’t have a vehicle with the all modifications she would require to train.

The Biblers learned there were no other places in Ohio that offered this kind of training, so they began to look outside of the state. Indiana seemed to have a facility but one had to be 18 years old to train and get an out-of-state license.

After two years of waiting, Bibler went to Indiana and was reevaluated. Once again, she passed, only to find the center lacked the right equipment.

Again, the Biblers searched the internet and found Brant Driving School, a facility in Johnstown, Pa. approximately 250 miles away from Columbus. She spent three weeks at the school and at the end of her training, Bibler’s instructor drove her to a Department of Motorized Vehicle testing facility on the Ohio/Pennsylvania border.

“I was nervous but excited at the time,” Bibler said. “I knew if I didn’t pass that time, I could redo it in two weeks but that wasn’t a good option for me since the test was in Pennsylvania. My mom said she couldn’t even look through a window to watch me because she was so nervous.

“I was really proud of myself because I don’t know many people who drive like I do.”

Armed with her license, Bibler is still adjusting to left behind the wheel of a 2019 Dodge Grand Caravan. The vehicle has a ramp that allows Bibler to get into the car, a power pan that adjusts her seat to the proper height to match her three-foot frame, and hand controls.

“It’s not too difficult for me,” she said. “I’m used to driving my wheelchair and it’s kind of the same setup, but I am only using one hand for the wheel where everyone else uses two.”

After spending over six years trying to get her license, Bibler now faces a new problem: finding places to go.

“I am terrible at knowing street names. When I drive places, I only go based on places I know. As long as I know where we are going, then we’re good. Other than driving to places I don’t know I don’t really get nervous.

“I am now able to go anywhere whenever I want and I do not have to worry about if someone is able to take me.”