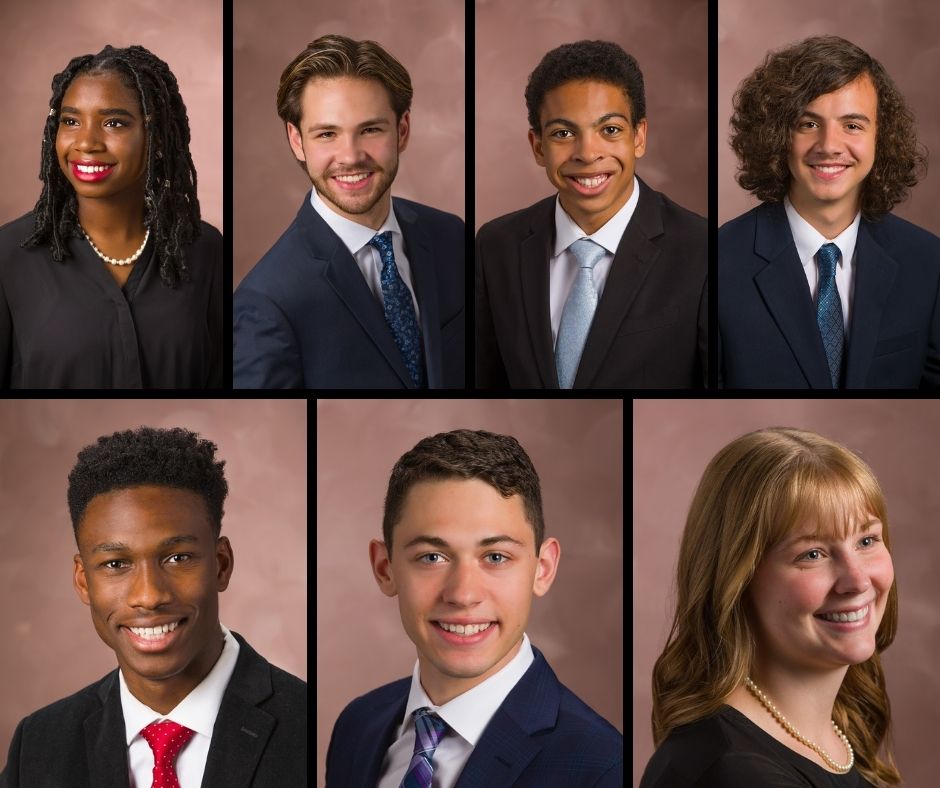 Every student has a story, and at Worthington Christian School, these stories are understood in the context of God’s great story–each graduate with a unique calling on their life that has surfaced in their time at WC and that they will continue to discover and explore as they are sent out into the world. Though we do not have the time and space to share every senior’s story, the following are a few seniors that are representative of the many incredible stories unfolding in WC’s Class of 2022. True to this generation of students, this year’s seniors are creative, passionate, willing to take risks, and strongly desire to make a positive impact in the world.

It was her story, senior Jaeda Tagoe believes, that secured her full-ride scholarship to Northwestern University. In WC English teacher Christina Hoverman’s Senior Writing Lab this year, Tagoe crafted an essay that shared a glimpse of her story as the daughter of immigrants from West Africa. Writing as an outsider looking at her life growing up, she writes, “The girl has felt this way for most of her life–that she spends her days doing insignificant tasks, all while others had fascinating adventures to share. She constantly wonders how her story was relevant, as hers feels overshadowed by her parents’.” Yet it was her parents’ pursuit of a better life and her mom’s encouragement toward academic excellence that have driven the bright young woman to maintain a 4.2 GPA, help to lead her basketball team to a state tournament, lead in the student group United Front, and pursue a pre-medicine track with an emphasis in psychology at Northwestern in the fall.

JaVaun Robinson also understands the significance of his parents’ story and feels motivated to excel in his own life because of it. He is the son of Jamaican-born parents and reflects on the humble beginnings from which his family came. They are now the owners of the Columbus-based Caribbean restaurant “Island Vibes.” In his words, “They are my biggest driving force.” He has maintained a strong GPA while balancing leadership and sports roles at WC, as well as maintaining a part-time job outside of school. He will certainly carry that motivation with him to Miami University in Oxford, Ohio, where he plans to double-major in Information Systems and Cybersecurity Management and Analytics.

Chad Smith, too, is profoundly aware of the power of story: He loves creating his own. He is passionate about story creating, character development, and the ways that characters interact with each other. In addition to participating in WC athletics (cross country, track, and soccer), he is an avid “doodler” and writes scripts as a hobby. He plans to attend Huntington University and study animation and screen writing after graduation, with the hopes of one day creating his own show series. Beloved by his classmates and generally described as a friend to all, he explains that his passion for writing has given him insight into loving others well. In his words, “You are not the main character of life (in general). If we move through life with the focus on ourselves–operating under the assumption that we are the main character of life–this makes it difficult to see other people and show them love.”

Will Muskopf has embraced the reality of seeing other people and showing them the love of Christ through his experience with Boy Scouts of America. He joined the Scouts at the age of 12 and has since worked through the various skills and milestones of the program over the last five years. He recently earned his place as an Eagle Scout, completing a project that took over 100 hours of planning, preparation, and labor to complete a “gaga ball” pit in Orange Township. As the oldest active member of his ethnically and culturally diverse troop, he understands his role as a leader in the group. He explains, “I can be an example of showing the love that Christ would show them.” Muskopf story will continue at Ohio University this fall where he plans to study electrical engineering.

Jarrett Doherty’s story has taken him across the country–literally. Through an experience with an eighth-grade English project, Doherty was inspired to begin creating and producing music. He was invited to be the audio engineer and later band mate alongside WC graduate Jay Joseph (WC ’17). Together they traveled over 13,000 miles on a music tour stretching from California to New York, all while Doherty was still completing his high school coursework for WC. In the midst of it all, Doherty explains that he has learned to rely on God’s leading and trust in His goodness in the ‘scary moments’ when we are called to step out in faith. He plans to pursue a music career full-time upon graduation.

Music has also been a significant part of Isaac Myhal’s story. Throughout his time at WC (starting in sixth grade), he has been deeply involved in the school’s choral program and theatre department. In his words, “The arts opportunities at WC have been amazing.” He has been a member of multiple singing groups including the WC men’s choir and a barbershop quartet. He has also participated in 14 theatre productions at WC since seventh grade. But it is Myhal’s passion for mathematics that has largely shaped the way he sees life. From his earliest days at WC, Myhal has been on an advanced math track and has done as much independent math study as he could outside of school. His love for mathematics combined with technological prowess has resulted in the creation of multiple programming projects, including a website for reading the Bible, a program for typing in Hebrew using a standard keyboard, and a “March Madness” bracket generator. As the depth of his mathematical knowledge has progressed, Myhal has learned to “move beyond what is predictable.” He is learning to explore the creative side of math, that involves feeling and intuition. Myhal was selected as a winner of the prestigious title of National Merit Finalist. He will attend Hillsdale College to continue his exploration of mathematics, with the hopes of working in the cyber security field someday.

Rebekah Shively’s story goes “way back”–to ancient times, actually. She has held a long-standing interest in history, and over the course of her high school experience realized that this was the passion that she wants to pursue in the future. She credits her history teachers at WC with further inspiring her love for history and desire to share it with others. WC’s Internship Academy afforded her the opportunity to work at the Ohio History Connection, where she curated objects for educational carts and participated in special events as a historical interpreter. This experience solidified her desire to pursue a degree in Museum Studies at Walsh University after graduation.

And each graduate opens a new chapter in the coming months, may they continue to see and understand their own stories as part of a much bigger story, sharing the perspective with which Tagoe concludes her powerful essay, “There, she begins to grasp how their story is as much hers as her story was theirs. The lives of her family were intricately bound into one significant story…Ultimately creating a young outspoken girl with endless dreams, and a hope to fulfill their combined story.”

Join us as we continue to celebrate the Class of 2022 by reading more in-depth stories of each of these graduates on WC’s social media platforms. Graduation will take place on Sunday, May 28.