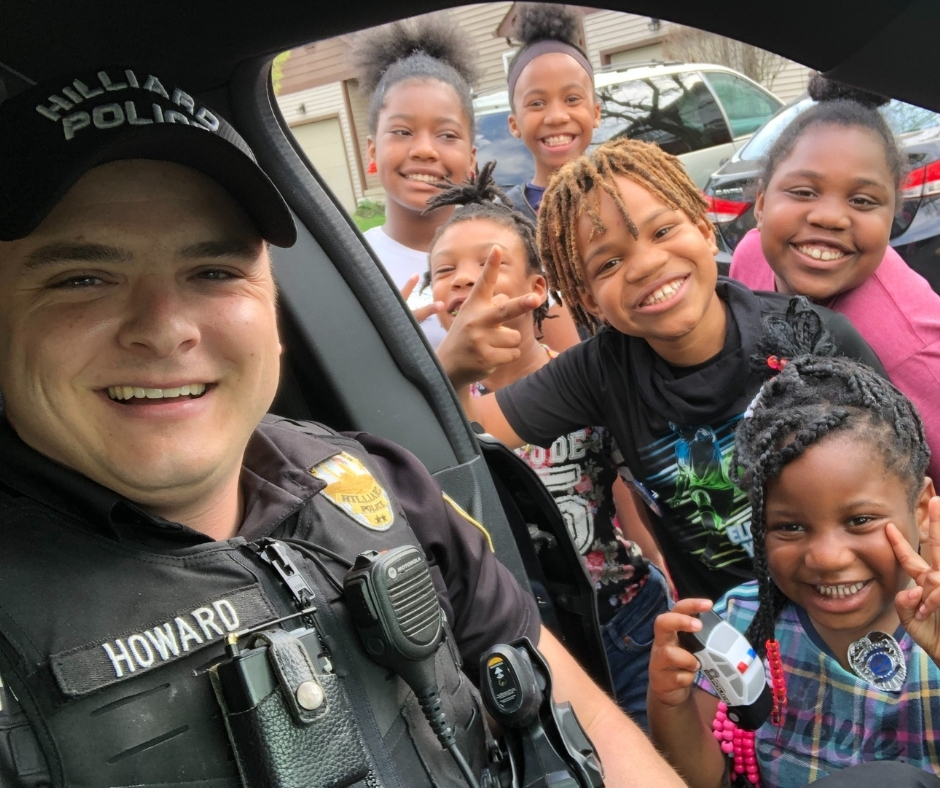 During last December’s hustle and bustle of holiday shopping, Hilliard police officer Joshua Howard (WC ’09) was able to give an area homeless family the most important gift: survival. Howard was recently given the Hilliard American Legion Law Officer of the Year award for his on-and off-duty efforts to help a family of three.

“It wasn’t anything I was expecting. I didn’t want any acknowledgment,” said Howard who was nominated for the award by former Chief of Police Robert Fisher prior to his retirement. “The really cool thing about this is how the community came together.

“I just felt like I was used as a vessel to help facilitate that. It has been kind of a cool experience to see how God worked through others to help this family.”

It started out as a routine call on the third shift. Howard and Officer Sam DiSaia responded to a report of someone living out of a car in a Target parking lot.

Upon further investigation, Howard learned it was a mother, who had lost her job and then later her house during the pandemic, and her two young children who were living out of the car. The two children were attending school virtually and required constant supervision, which prevented the mother from looking for a new job.

Rather than taking them to a shelter, Howard and DiSaia took the family to a nearby hotel and the officers split the cost for a night’s stay.

“When I got home that night, I told my wife Ashley about it and she said she felt they should do a little bit more,” Howard said. “I said I don’t know where they are now. We just paid for that one night.”

Two nights later, Howard stopped at a Speedway gas station to get a snack and saw their car parked behind the building.

“I asked them, ‘hey how’s it going?’ They said they were just sort of hanging out here. I told them my wife thought we needed to buy you another room at the hotel.”

Howard took the family back to a hotel where he knew the manager. After Howard explained the situation, the manager said, “Why don’t we double that investment?”

“So instead of buying another room for a couple of days, the family got a week’s worth of hotel rooms,” Howard said.

A member of the Hilliard community heard about what Howard was doing and posted about it on Facebook. Suddenly, the support for the family ballooned. Residents dropped off various gift cards and area restaurants contributed food. One resident gave the family a check for $1,000, the equivalent of a week’s worth of hotel residency. Soon the Hilliard Davidson High School cafeteria got involved, donating 72 hot meals for the family. Howard and Ashley bought Christmas gifts for the children.

“When other people started seeing it on Facebook, and other social media, I began to get messages from other people wanting to pitch in,” Howard said. “Things began to snowball. We raised over $4,000 to help that family and we were able to keep that family in a hotel for over a month. That kept them there until the midpart of January when the temperature is the coldest.

“I used to be a pastor and I know sometimes generosity can become more hurtful than helpful (as the needy rely on a handout rather than looking for a permanent solution to their problems). I wanted to help buy them time so they could get back on their feet rather than just giving them a bunch of stuff so we could feel good about ourselves. We got them a place where they could breathe and stay warm and not worry where they were going to stay, so they can start focusing on other things. We tried to help them find some sustainability.”

Howard then contacted a Mount Carmel Hospital outreach who connected the family with resources for medical and mental wellness checkups, housing, employment, and schooling.

Opportunities like this one are the reason why Howard became a police officer. Howard was a pastor in the Hilliard community and helped start the Movement Church in the suburb. After six years, he decided to go for what seems like a radical career shift. At first, he planned on becoming a chaplain for the police force but having gone through training to become a policeman and seeing the need for officers in Hilliard shifted his focus.

Being a pastor and being a police officer have some similarities, according to Howard.

“Being a policeman is being called to be a light to the people in the community and to my own co-workers,” Howard said. “There’s definitely a ministry here too.

“As a police officer, you’re often dealing with people on the worst day of their lives. That’s one of the reasons I felt called to be a cop: I could meet people where they are in their lives when they are completely broken. They might be just arrested, or they could be the victim of a crime.”

Although he didn’t want publicity for his work with the homeless family, Howard said it was nice for the police force to be recognized for doing good.

“There are many acts of generosity that officers do every day that go unnoticed,” he said. “They show up, fix the problem, and then go on to their next call. Unfortunately, the media often presents the bad things that happen.”