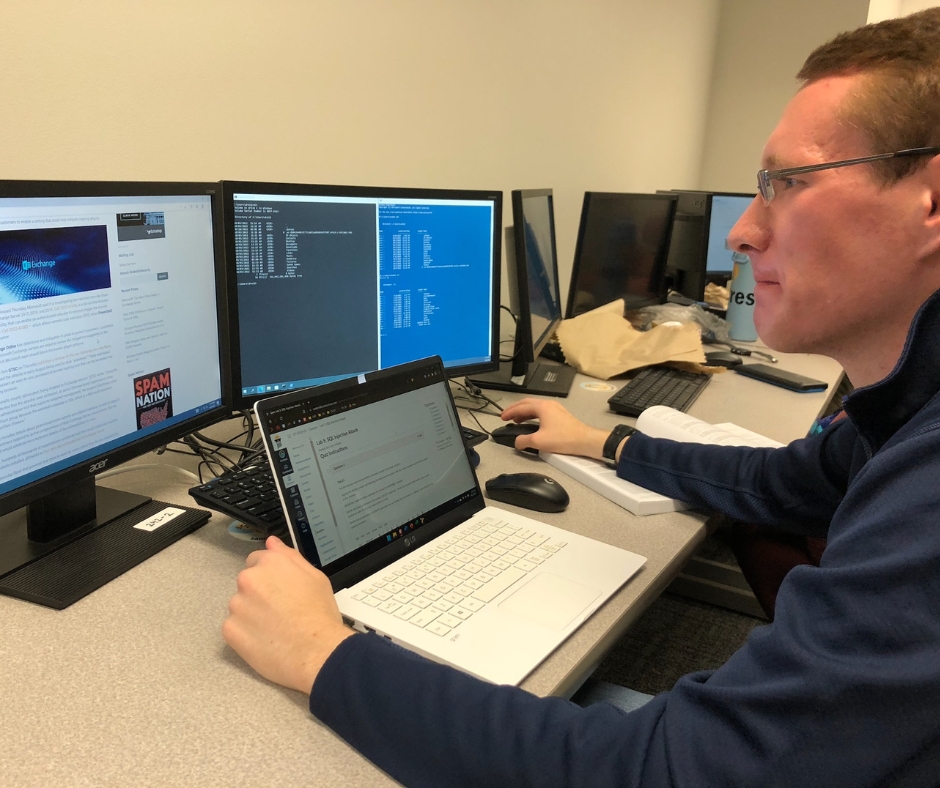 David Reid, Jr. (WC ’21) is ahead of his time. Reid, who is double majoring in Cyber Operations and Computer Science in the honors program at Cedarville University, was recently named a Student Fellow for the Center for the Advancement of Cybersecurity.

Since the center was opened in 2018, the Student Fellow honor has always been bestowed upon a senior. Reid is just a sophomore.

“It is a major honor, and I feel blessed to do it,” Reid said.

Reid provides Dr. Seth Hamman, the center’s director, with the student perspective on different issues within the program and assists with anything Hamman needs help with.

Since he arrived on campus, Reid has found his niche in the cybersecurity program. He has thrown himself headfirst into the school’s cybersecurity team, which captured the Collegiate Cyber Defense Competition state title and placed fourth in a national competition last year.

Still, Reid was a little taken aback when Hamman encouraged him to apply as a Student Fellow at the beginning of the fall.

“Dr. Hamman approached me and said, ‘You’re doing a great job here helping out. Would you essentially want to continue to do that but in a more official capacity this year?’” Reid said. “He was pleased with my enthusiasm, how I was helping the program, and my commitment, so he offered me the position.

“We have a lot of people who are in my major, but some are on athletic teams or have other varying commitments. I’m just a regular guy but passionate about cybersecurity.”

Reid believes he received the position because of the different leadership capabilities he picked up while he attended Worthington Christian. WC science teacher Debbie Gilliland led him to discover his passion.

Gilliland asked students what they wanted to study in science, and Reid, obsessed with airplanes at the time, said he wanted to learn about aerodynamics.

“Mrs. G said, ‘Well, we don’t do much with that here, but if you’re interested, why don’t you call the Civil Air Patrol?’ I joined up with the CAP, and I have loved it ever since.”

The Civil Air Patrol is a civilian auxiliary of the United States Air Force. It has a three-pronged mission: providing emergency search and rescue operations, aerospace education, and cadet training programs for teenagers.

Through CAP, Reid discovered his true calling wasn’t necessarily in aerodynamics but in cybersecurity.

“While I was a cadet in the CAP, I was exposed to many different (facets of the military),” he said. “I signed up for cybersecurity and discovered I enjoyed it.

“I figured out you can make a career out of it, and it pays pretty well. The more I did it, the more I discovered this was cool. I ended up doing more cyber stuff for the Columbus composite squadron.”

During his time with the Columbus Composite Squadron 139, Reid helped form the squadron’s first cybersecurity team, which is now one of the top teams in the state in the military division.

The competitions vary from an intensive computerized game of hide and sneak. Each team inherits a simulated company’s computer system. Hidden in its cyberland functions are these tiny flags each team must find.

“When you were little, did you ever play capture the flag?” Reid asked. “It’s kind of like that. We have to find these flags, which are pieces of a coded string. It could be hidden in a Word document or some obscure file in the operating system.”

Other competitions, like the Collegiate Cyber Defense Competition, are much more intricate and complex. At the CCDC competitions, participants are given a computer network that simulates a business, and teams must respond to emails, and business column injects while defending the network against cyberattacks. Competitions can be five to eight hours long.

“Your job basically is to defend your network,” he said. “You have to reply to company stakeholders and respond to customers.

“(At the same time), there is an active red team, a group of industry professional hackers trying to get into the network and mess with you intentionally.

Competitions have scoring engines that reveal the team’s standings, but Reid said the scores constantly fluctuate.

“In that last 30 minutes, things can be pretty hectic,” Reid said. “The Red team will often pull out some of their best tricks right at the end, so it comes down to the wire every time.

“We’re watching the clock tick down, and things seem pretty good on our side of the network here, but you never know.

“When we saw the final results, it was definitely surreal. (The competitions) take a lot out of you. You’re kind of tired and relieved. And then at the end, you’re like, let’s do this again.”