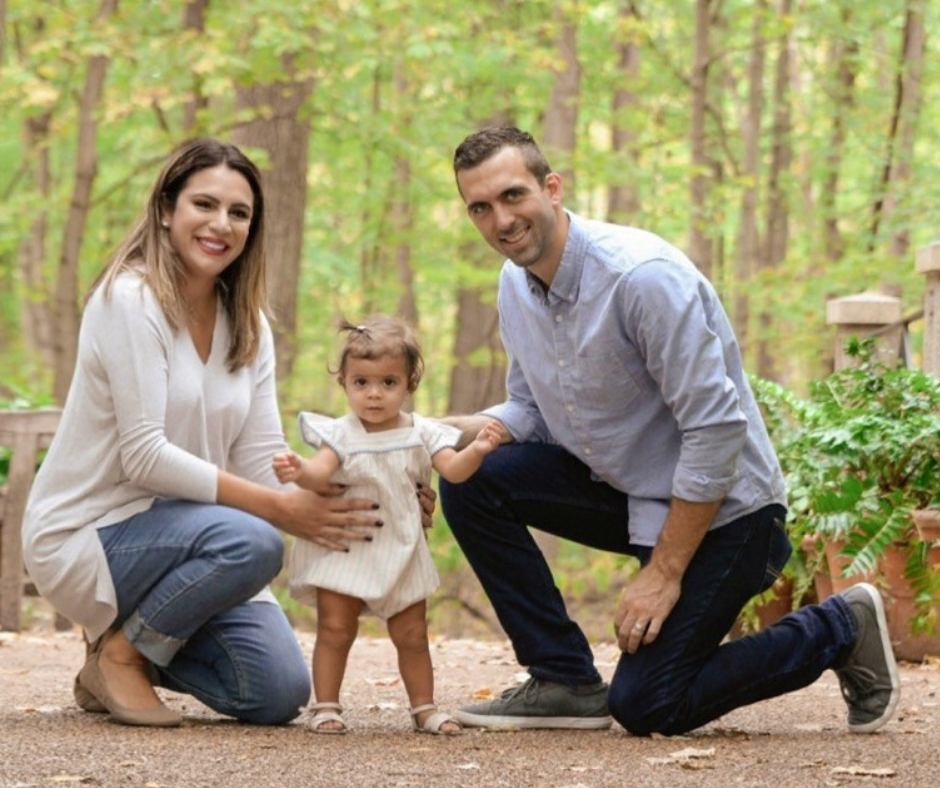 For most of their time at Worthington Christian High School, Carson Wellman (WC ’10) and Danna Jimenez (WC ’07) traveled in vastly different social circles. Danna was getting ready to graduate and Carson was just an underclassman.

Classmates were more than a little amazed when the two married April 23, 2016, at the Liberty Presbyterian Church in Powell.

“I’d say my friends were surprised,” said Carson, a facility service manager at City Wide Maintenance of Columbus. “I met Danna at WC, but we didn’t really know each other at all. It was more that we just knew of each other.”

“We never really got to know each other because dating a freshman as a senior wasn’t cool,” added Danna, who gave birth to Josephine Grace Wellman in 2018. “We later reconnected while hanging out with mutual friends on (Ohio State’s) campus.”

Carson joked Danna made more of an impression on him than he did on her.

“My initial impression of Carson was that he was a good guy,” Danna said. “He seemed mature for his age.”

The two diverged on different paths after high school. Carson went out west, enrolling in the U.S. Air Force Academy in Colorado Springs, Colo. Danna became a nanny and traveled.

Danna said God arranged a perfect time for the two to reconnect through mutual friends.

“We met again on campus and I saw him again for the first time in a long time,” she said. “It was a time in my life where I really needed a true genuine friend and I believe God brought us together at the perfect time. He became my best friend pretty quickly.

“I was attracted to his eyes. Of course, I was drawn to his personality and his ability to become friends with anyone. Everyone likes him.”

“It was her looks at first that got my attention but once I got to know her, it was her personality. She is very social and outgoing,” Carson added. “I knew I wanted to marry Danna when I realized that she was willing to go to events with me even when I knew she didn’t want to go. She put a smile on her face because she knew it would make me happy. We have the same beliefs and we have a lot in common.”

To pop the question, Carson pulled out all the stops. Danna was born in New York and loves the Big Apple. He planned a getaway for the two to NYC and took her on a gondola ride in Central Park.

“The gondolier knew about our story and sang one of our favorite songs while we rode and I proposed after his song,” he said. “Once we got off the boat, the paparazzi (of friends and family) followed us around Central Park for a private photo shoot. The next day I took her on a helicopter tour over the city.”

While it may seem like a fairy tale proposal, not all things in the Wellman’s life have been perfect. Shortly after they got married, Danna was told she couldn’t have children.

The two clung to Mark 11:24: “Therefore, I tell you whatever you ask for in prayer believe that you have received it and it will be yours.”

“That was one we focused on when we were told Danna could not conceive,” Carson said. “We believed God would bless us with a miracle baby and He did.”

“If someone would ask me, what is the secret to a strong relationship, I’d say Jesus,” Danna said. “Keep Jesus in the center of your relationship and you will be okay. Pray together.”