FOLLOWING A PATH OF HISTORY IN SPAIN

Home » Alumni News » FOLLOWING A PATH OF HISTORY IN SPAIN 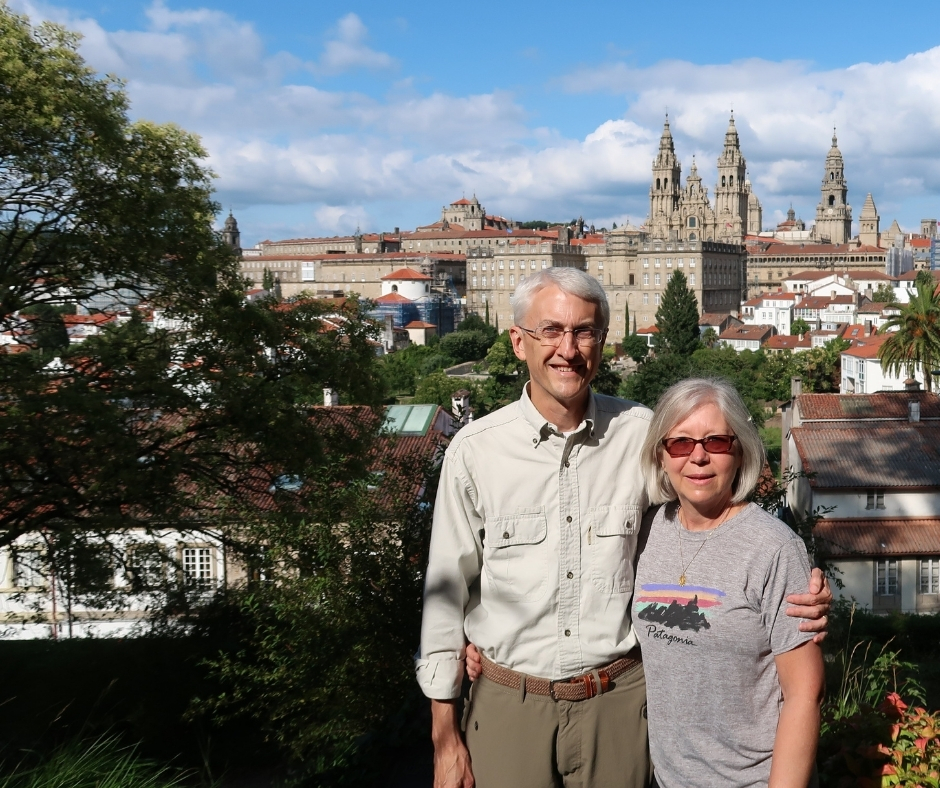 Brian Bookheimer (WC ’81) didn’t get a chance to run with the bulls when he, his wife Joan, and his brother Scott (WC ’84) visited Pamplona for the Festival of San Fermin last July. But he did get a chance to tiptoe past one during his completion of the Way of St. James (Camino Santiago), a 177-mile walking tour from Astorga to Santiago in northern Spain.

“We were about a mile away from the city of Rabanal de Camino and we came to this narrow part of the trail,” said Bookheimer, who lives in Westerville with Joan and has five children, Vaughn, Thomas, and David (who graduated from The Ohio State University), Katherine (a junior at OSU) and Annie (a freshman at Olentangy Orange). “We had seen a couple of steers had gotten out of the gate, going from one pasture to another. One of them started heading down the road towards us. We went another 50 yards and suddenly, we’re face to face with this large steer.

“I’m looking at this bull and thinking ‘Okay, what do I do?’ And the bull is looking at me and appeared to be thinking the same thing. I just acted very calm and nonchalant and scooted a little bit to the right and just slowly passed him.”

The close encounter with the bull was one of the many adventures he and Joan had during their 10-day pilgrimage to Santiago, following the path of St. James last July.

“I have always dreamed of going to Spain,” Bookheimer said. “My brother and I always talked about going to Pamplona for the running of the bulls when we were back in college. I later saw this documentary about the Camino Santiago, and it really intrigued me.

“There’s really nothing in the world like it. It blends all of my passions—hiking, history, and faith. You are walking on the same path that Caesar Augustus, Charlamagne, and Saint Francis of Assisi also traveled.”

The Bookheimers had planned to make the journey to Spain last year. However, COVID put the trip on hold for a year.

Brian and Joan rescheduled the trip for this summer. Scott joined them in Pamplona before exploring nearby Portugal.

The Bookheimers have hiked most of the major national parks in the United States. However, going on such a long journey in Spain was going to be something completely different. The pair divided up the journey into ten 17-mile sections. To get ready for the journey, the two often went on strenuous hikes around Ohio.

“We knew we could go 15 miles a day easy, but the big question was can we do it day after day after day for almost two weeks,” Bookheimer said. “You don’t quite know if you can do that until you do it. It’s a pretty good workout as long as you listen to your body.”

Outside of overcoming blisters and some bruised toes, the couple handled the pilgrimage without much problem.

“We would go out and usually hike for several hours and then you come across towns with these little cafes where you could stop. Each day was its own unique adventure. In one town, you might see an old castle or a famous church, or an old Roman bridge. The people that you would meet were very friendly. They’d ask where you are from, and we’d talked for a bit. It was very nice.”

Travelers on the Camino Santiago often purchase a credencia or a pilgrim’s passport, which they get stamped at the towns they stay in along the way. At the end of the journey, tourists who walked over 100 kilometers or biked over 200 kilometers receive a Compostela or certification of achievement from the Pilgrim’s Office at Santiago.

Bookheimer said the end of the journey was that an emotional moment, especially visiting the tomb of the apostle of James.

“In several of the services during the journey, the priests would remind us that our pilgrimage on the Camino is kind of symbolistic for life,” he said. “You have there have rain or sunshine. The path could be smooth, or you could be walking up in the mountains. Yes, there are challenges, but you just must have that fortitude and perseverance to keep going. “Life’s like that. You just know that you have to have the perseverance to reach our ultimate goal, which is being with Christ in heaven.”