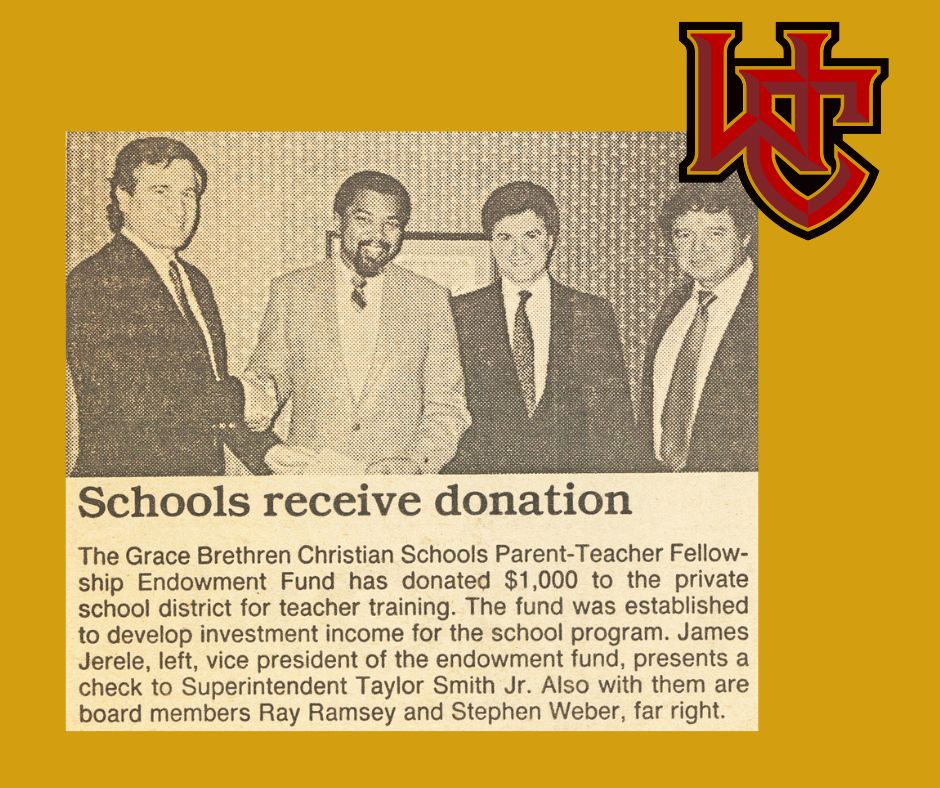 In the late 1980s, a group of Worthington Christian dads began to discuss ways that they could support the school in a way that would have a lasting impact. They shared a desire to create something that would ensure the school had funds available on a long-term basis. One of these dads, Tom Mason, suggested creating an endowment fund, an investment fund that allows for regular withdrawals from the interest it earns while the principal continues to grow. The group agreed that this was the best option to fulfill their vision, and WC’s Parent-Teacher Fellowship Endowment Fund was born.

Once these men decided to create an endowment fund, they developed a 501 (c)(3) tax-exempt public charity, along with a board of trustees to oversee its management. They collected $1000 as the initial investment. Dr. Steve Weber served as the fund’s treasurer for many years. Beginning in 1986 and continuing through 2021, Dr. Weber and fellow WC dad Glenn Williams met every Monday morning to take care of any business pertaining to the fund. Ray Ramsay, Jim Jerele, Cliff Raymond, and Craig Wright are some of the other men that played significant roles in developing this fund.

Over time, the initial investment of $1000 in the PTF Endowment Fund began to grow. There were annual school fundraisers that gave a portion of their proceeds to the fund, events like a pastors’ luncheon to raise awareness of and engagement with the fund, and the faithful generosity of people deeply committed to WC that contributed to the fund’s growth. Today, this fund’s principal amount is over $750,000. Because it’s an endowment, not one penny of the money raised or donated to it has been taken out—only the interest earnings. And those interest earnings have been used to bless so many in the WC community. To date, the fund has given over $350,000 to WC faculty, staff, and students in the form of cash awards and scholarship credits.

In an effort to continue practicing good stewardship of the fund and in hopes of making it even more successful in the future, the board of trustees decided to transition it to an Organization Endowment Fund within the Columbus Foundation in 2021. It is now called the Worthington Christian School Fund for Academic Excellence.

One of the most instrumental men in this entire process is WC alumni dad, Jim Edwards. He has also been involved with the fund from its earliest years and served as the president of the board of trustees for many years. In the video below, he shares some of his experience.