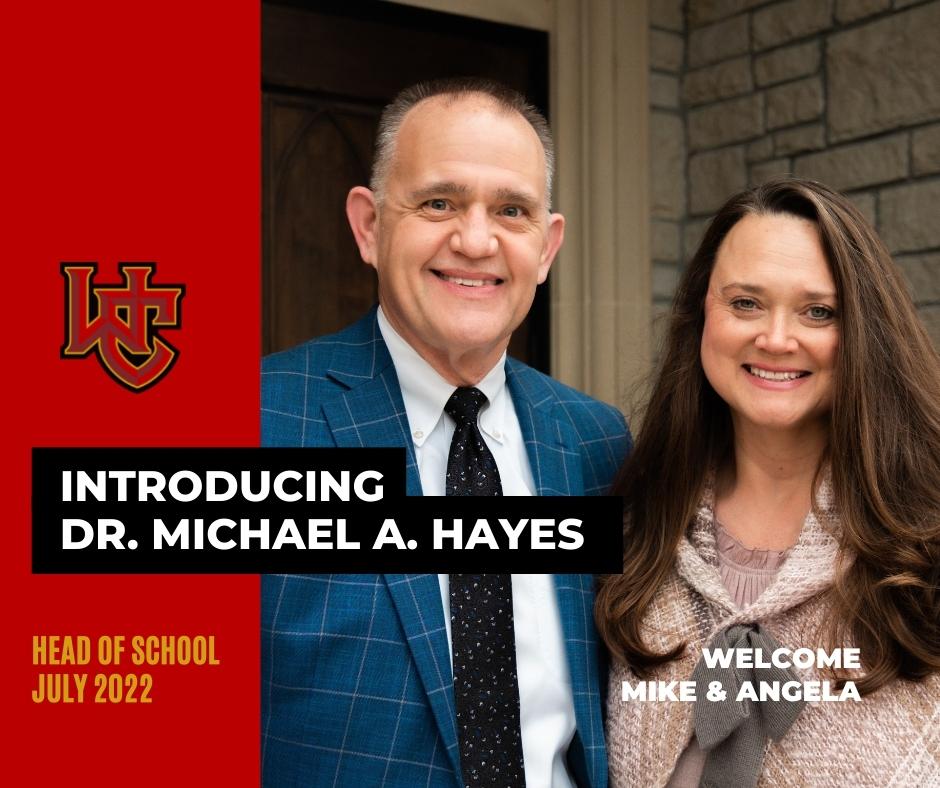 School board announces the appointment of Dr. Michael A. Hayes.

Mike’s responsibilities at Lee have been impressive and extensive. In his current post, he oversees campus ministries, counseling, health clinic, new student orientation, racial and ethnic relations, and residential life and housing among many other functions. Mike has also chaired several university committees and task forces including the Center for Leadership Development Committee, the Athletic Advisory Board, the Biblical Sexuality Committee, and the Campus Security Assessment Task Force. Mike is engaged in academic and tenure review and reaccreditation programs at Lee and has served periodically as President Pro Tem.

Mike has also spent consistent time in the classroom and has taught many undergraduate and graduate courses in personal and team leadership, psychology, and educational practices. Mike’s work with younger students includes his oversight of an esteemed summer honors program for high school students. This successful program has grown substantially under Mike’s leadership.

Mike’s interest in Worthington Christian stems from his deep passion and calling “to help students know they matter.” He is strongly aligned to the WCS mission, its heritage as a Christian school, and the focus on future vision. Mike loves the role of working with younger children and has come to the realization that he wants to impact the life trajectory of students at an earlier age. He is dedicated to partnering with families, WCS administration, faculty, and staff to help shepherd young children and young people. He desires to ensure that WCS intentionally connects faith and learning to prepare students to make God-honoring decisions as they work through the struggles they encounter and to help them defend their faith and understand current social issues in the context of biblical truth.

Mike is no stranger to Ohio having been born and raised in the small town of Sidney in western Ohio north of Dayton. Mike played “every sport with a ball” in Sidney where his young life revolved around school, athletics, and church. While at Lee, Mike met his wife Angela who is from South Georgia. Angela has served for many years in K-12 education as a teacher and administrator and is currently pursuing her Doctorate in Education. Mike and Angela have two children, Nicole who is finishing her Ph.D. in Applied Mathematics at Michigan State University, and Aaron who recently moved to Nashville Tennessee to pursue his career as a talented producer and instrumentalist.

Mike and Angela will finish their work in Tennessee in early July and begin their transition to Ohio for Mike’s first day at WCS in July 2022. We are deeply appreciative to Jim Parrish for his unswerving dedication to and capable leadership of WCS this year. Jim will continue to lead WCS through the transition of Head of School responsibilities next year.

There will be a number of informal and organized opportunities for students, families, faculty, and staff to interact with Mike as we begin the 2022-23 school year. His initial focus will be listening, assessing, understanding the WCS culture, and developing relationships with the school community. Until that time, Mike and Angela will be “finishing well” in their current roles.

We also want to thank the school community—staff, faculty, students, families, supporters, and alumni who have prayed with and for us during this process. Our focus has been to follow God’s leading to the person He called as the next leader for Worthington Christian School. We are grateful for your prayers and grateful for God’s work. We look forward to this next era of life-transforming Christian education at WCS.

Worthington Christian School Board of Directors