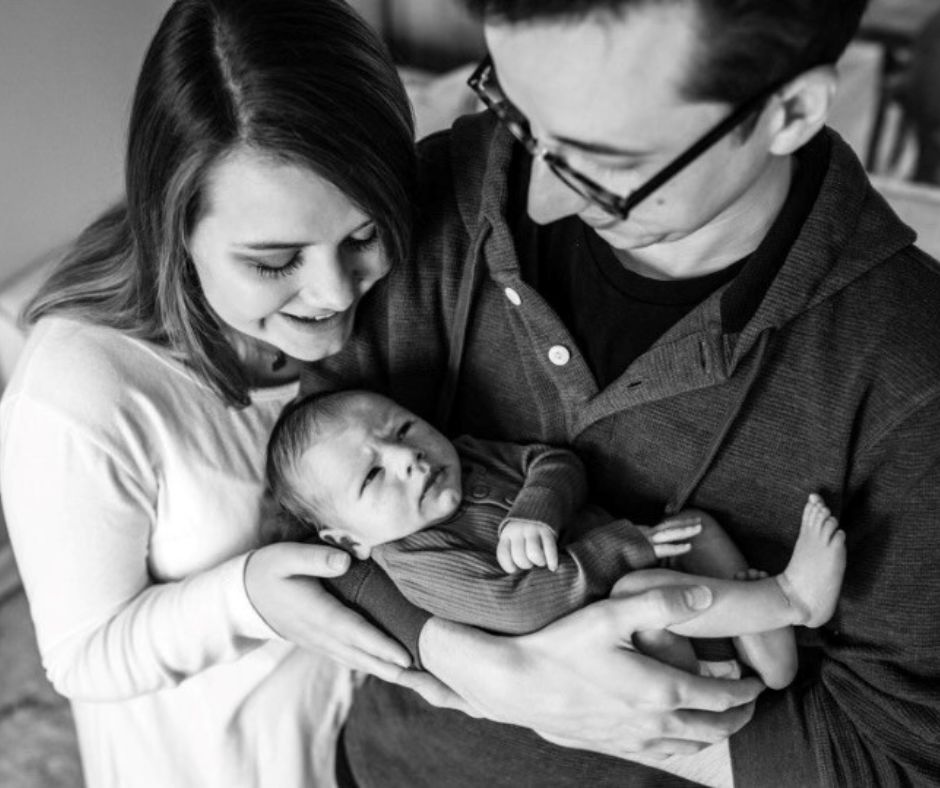 A long, winding road leads Muschott to his calling at Life Community Church.

At the heart of the pandemic, Muschott (WC ‘12), the worship and young adult pastor at Life Community Church (LCC) in Hilliard, suffered through the separation of church and congregation.

“We did services online for months before going back in July 2020,” Muschott said. “When we came back, we were super social distancing. The worship team only did two songs, and the congregation couldn’t sing along with us.

“I thought, ‘This is killing me. I don’t like this. It feels like I’m performing, you know?’”

When Life Community returned to a “full worship” service in December 2020, Muschott was blown away by the results.

“My mind, heart, and body were not ready for what it would be like,” said Muschott, who lives in Grove City with his wife, Allison, and his son, Boston Guy. “We started to sing, and hearing everyone sing along just completely wrecked me. I lost it. For two songs, I couldn’t stop crying.”

Muschott traces his desire to be a worship leader to his days at Worthington Christian. Without the support of Karen Rugg-Klapheke and Dave O’Roark, he might have gone into a different occupation.

“When I was younger, my dad (former Warriors golf coach Dave Muschott) had me try every sport imaginable: soccer, basketball, and baseball, just to name a few,” Muschott said. “I even took a swing at golf my first two high school years where my dad was the coach. He genuinely wanted me to have a great time, and I genuinely wanted not to be the worst player on the team. Both of those things did not always happen.”

Where Muschott did flourish was in the performing arts. One of the shorter kids in his class, Muschott, joked he always ended up playing the son in school plays. When the school presented Beauty and the Beast, Muschott wanted to play Lumiere, the wisecracking candlestick but secretly worried he would get cast as Chip, the son of Mrs. Potts.

As it turned out, he didn’t get either part. He was cast as the Beast, something he wasn’t prepared for.

“As we were heading over to check out the cast list, people kept saying, ‘You’re going to be the Beast,” he said. “I thought they were joking because I had to be the smallest guy who tried out.

“Even to this day, I still think about that show. After one performance, my dad came up to me and said, ‘I always wanted you to be a good golfer, but you have amazed me in many different ways. I could never have imagined how proud I could be of you at this moment.’ I will never forget that moment.”

Muschott thought at first he would follow into the family business of education. His father is currently the principal at Grove City Christian elementary school, and his sister Brittany (Muschott) Hecker (WC ’08) is a teacher. Muschott started out majoring in worship at Cedarville University but switched to early childhood education his sophomore year. In 2017 he taught second grade at Grove City Christian while working part-time at Life Community Church.

“Looking back at it, it’s crazy how many times I switched between being a pastor and being a teacher,” said Muschott, who started working full-time at LCC in the summer of 2018. “While I had a great time teaching, I felt a strong pull back into pursuing ministry as my vocation.”

Muschott met his wife Allison at college, but the two didn’t date until she moved to Columbus to work as a fourth-grade teacher in Grove City. She turned out to be a Belle to his Beast quite literally. While in high school in Randolph, N.Y., she played Belle in a high school production of Beauty and the Beast.

“We were never romantically interested in each other in college,” said Muschott, who married Allison in 2018 after dating her for a year. “It wasn’t until we crossed paths again when she moved to Columbus that we realized the other one was fantastic.

“I wanted to have ‘Tale As Old As Time’ played at our wedding, but she said no. Later, we went to a Beauty and the Beast show at Disney World, and she whispered, ‘I wish we had played this song at our wedding.’ I was like; I told you that so many times!”

The Muschotts both work on putting together the worship service and serving on the worship team at LCC. They both rely on each other for support while organizing a service.

“Being on the worship team asks a lot of you,” Muschott said. “It requires you to be selfless. You can get burnt out; you can get burned and get your feelings hurt. But it is so rewarding in ways that you can’t really understand until you are neck deep in it.”