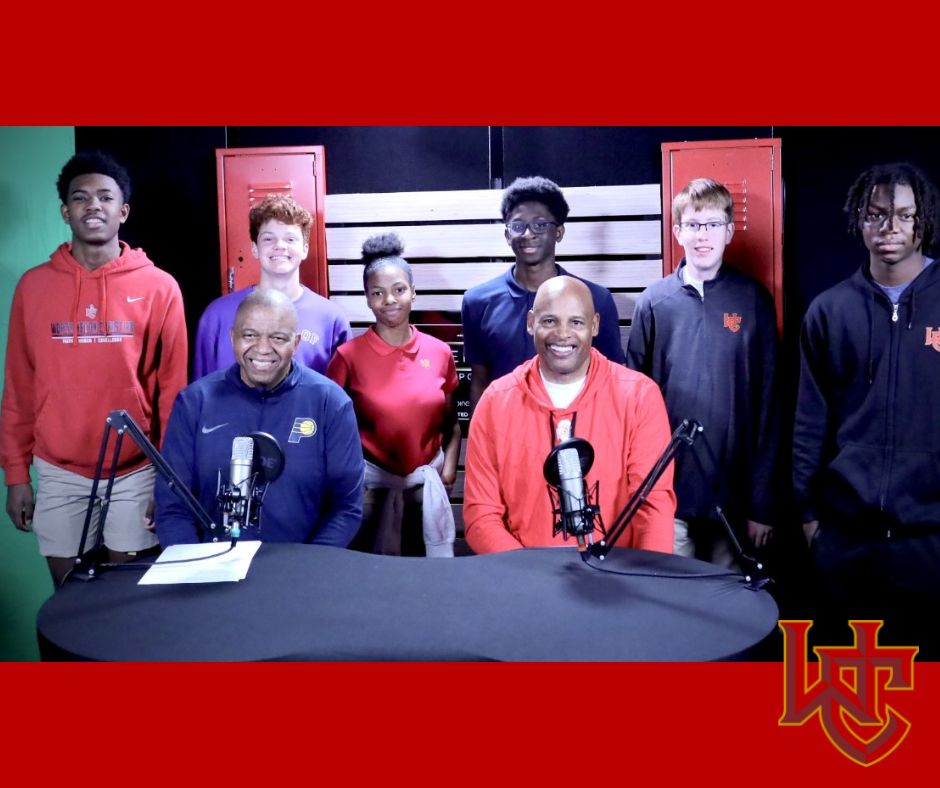 Earlier this year, Worthington Christian sophomores Matthew Morganski and Michael Redd II began producing, recording, editing, and publishing their own podcast. Fellow Warrior, junior Leo Tabi, has many hours of experience editing videos for his family and friends. These students are passionate about and gifted in their creative pursuits, but they are not alone in their media-creating endeavors among their peers. The reality of our modern society is that platforms like Spotify, TikTok, Instagram, and YouTube are pervasive. As such, creating videos, recording audio sound bites, and producing podcasts are commonplace pastimes–almost second nature—for the upcoming generations.

This reality has direct implications for the realm of education and raises many questions for educators. At WC, teachers aim to engage learners in experiential, authentic, and purposeful learning through an adaptive and student-centered learning environment. One example of this type of learning environment is Upper School teacher David Stoll’s new Video Production class.

Springboarding off years of experience teaching iJournalism and Broadcasting at WC, Stoll developed the elective course Video Production to provide students with opportunities to sharpen their audio/visual recording and editing skills. He explains, “I designed this course to be hands-on, real-world, and client-based.” So far, his students have had an incredible experience that aligns with these goals, thanks to an opportunity with a community partner.

Last year as Stoll was in the planning stage of developing the Video Production class, he was approached by WC alumni parent Tim Brown about a new collaborative project. In addition to having a longstanding relationship with WC, Brown serves as an area educator, motivational speaker, and the Camp Director for Central Ohio FCA. He reached out to Stoll with plans to start a new podcast entitled “Be a Baller” and asked if Stoll had students who could be a part of producing the podcast. Stoll recognized immediately that this podcast would be the perfect project for the new Video Production class.

Over this year, Stoll’s six Video Production students have been commissioned to record, edit, and produce 15 podcast episodes for Brown. They are taking part in the audio production, video switching, editing, and post-editing of each episode. They have also practiced interviewing and building rapport with potential clients (like Brown). Stoll incorporates three of the top video editing platforms into the curriculum so that students are proficient in a variety of software programs.

Even though Tabi already has much experience in video editing, he had never had the opportunity to take a school course on the topic. As a new student at WC this year coming from England, he intentionally selected Video Production to deepen his skills and expand his knowledge base. He recently collaborated with a classmate to create a 90-second trailer for the soon-to-be-released “Be a Baller” podcast. He explains, “The class structure allows for creative freedom, and I appreciate that. It’s cool to see something I’ve made being used in the ‘real world.’”

While Redd already hosts and records his own podcast, he too has been challenged to broaden his media skills through the Video Production class. Responsible for video switching during each episode’s recording as well as assisting with the audio, Redd has a front-row seat to the broadcast studio’s equipment. He explains this his exposure to these state-of-the-art tools inspire him to improve his podcast. Beyond the technical benefits of the experience, though, Redd explains that the “Be a Baller” recording experience has had an even more profound impact on him because of its content.

One of the primary reasons that Brown originally desired to partner with WC students for his “Be a Baller” podcast is because he desires students to hear the stories of his guests—stories of adversity and overcoming shared by successful and influential community leaders. Figures like former NBA player and current lead sports analyst for CBS Sports Clark Kellogg, Columbus-based faith leader Pastor Leon Troy, Central Ohio business leader Steve Lindsay, and former Columbus mayor Michael Coleman. Redd shares, “I have known of many of the guests we’ve had on the podcast, but this is my first opportunity to hear their stories first-hand. Learning their stories of facing challenges and continuing to move forward has been very impactful to me.”

The students’ work on the “Be a Baller” podcast will be available for listening/viewing when it officially launches in January—the content will be available on every major podcasting platform and Coach Tim Brown’s YouTube channel.