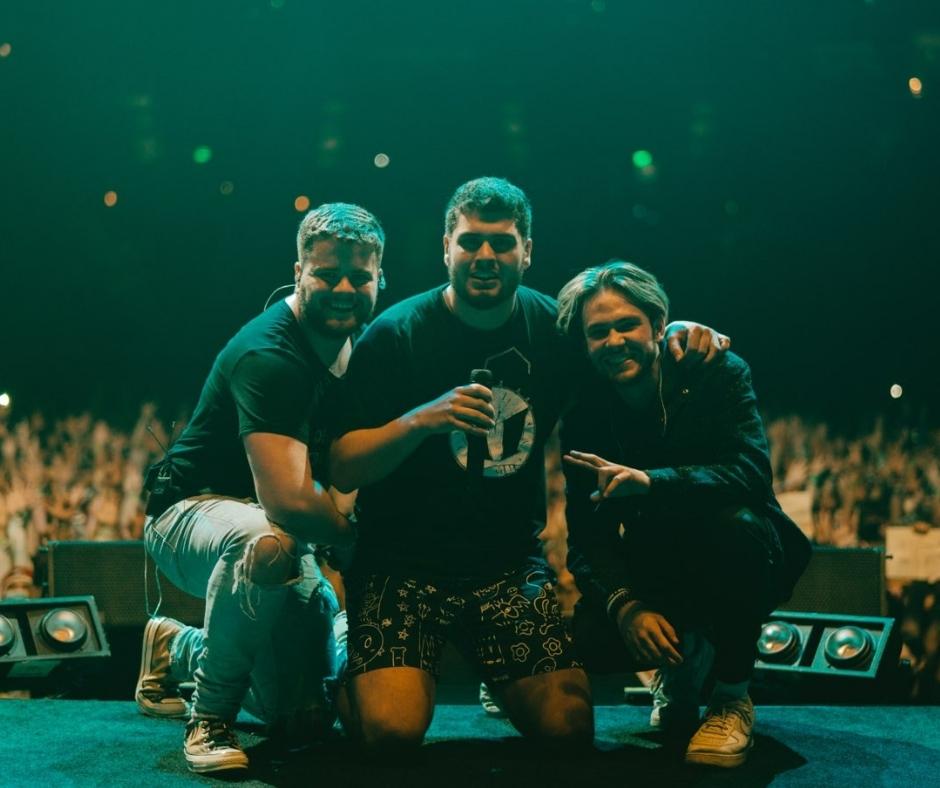 For the last six months, the lives of Worthington Christian graduates Jay Joseph (WC ‘17) and Jack Peterman (WC ’16), and current senior Jarrett Doherty have been in an asymmetrical balance. On one side of the pendulum is the normal humdrum of being a student and/or working nominal jobs to pay the rent. On the other side is living out the dream of warming up for Twenty One Pilots and performing before sold-out crowds at Nationwide Arena.

“I’m in this place where I need to be working a full-time job and making money for me and my future wife,” said Joseph, who recently proposed to Lauren Weygandt (WC ‘15). “I’ve applied for 90 different positions on LinkedIn and I have a multitude of different side hustles, doing construction, demolition, and renovations. I’m just a grunt in the workforce.

“At the same time, I’m also sort of chasing a dream of making music. It’s a little bit of a weird situation where I need to start being an adult and doing those adult things, but I don’t want to let go of some of these musical passions and dreams I have.”

Joseph recently dropped a four-song EP titled “Drywall,” which was produced by Doherty. The title “Drywall” recalls the summer Joseph spent doing construction when he built up and tore down miles of drywall.

The title track restates the quandary Joseph and his bandmates find themselves in: Purpose over money, ain’t it funny? I just wanna feel alive and I don’t really care if it’s a vibe.

The trio cut their teeth supporting Arrested Youth in a small club tour last August and then landed a nine-date gig warming up for Twenty One Pilots, which is fronted by Joseph’s older brother Tyler (WC ’08).

Before hitting the road to promote Drywall, Joseph realized he needed to assemble a band so he could recreate the sound he and Doherty developed in the studio. Joseph said one of the first calls he made was to Peterman, who had played drums with the Worthington Christian worship band.

Peterman said there were a couple of problems with the invitation. The first was he hadn’t picked up a drumstick in about two years. The second was he held a job with a local insurance company and most likely couldn’t get the time off.

However, Peterman’s decision to join Joseph took less than a half-hour to make.

“I was working at home when Jay texted me,” Peterman said. “I ran downstairs and told my mom (Marion), Jay asked me to join him on a tour. She said, ‘Oh, that’s cool’ but when I told her we’d be opening for Twenty One Pilots, she was like ‘Are you kidding me?’

“Ten minutes later, I got a text from my dad (Sonny) saying ‘Quit your job. You absolutely need to do this.’”

When he first found out Joseph was going to road test the songs the two had been working on, Doherty was excited. He didn’t realize that it meant he had to come along with Joseph.

“Jay called me, and he said, ‘I just got the opportunity to open up for my brother,’” said Doherty, who plays bass. “I said, ‘Wow that’s awesome. So those songs I’ve helped produce in my basement are going to be played for thousands of people.’ Jay said, ‘Actually, I want you to be in the band.’ I was standing there with my jaw dropped.”

“One of the coolest things about this experience was seeing the look on Jarrett’s face when we were performing in Boston Gardens,” Peterman added. “He was nervous like we all were, but he really broke out of his shell. I couldn’t imagine myself at 17 doing the things we were doing. By the end of the tour in Atlanta, he was just going nuts.”

Doherty got involved with Jay Joseph after his father Kent had a chance encounter with Tyler Joseph. His father asked the Twenty-One Pilots frontman what advice did the singer have for someone who wanted to get into the music business. To Kent’s surprise and Jarrett’s delight, Tyler opened the doors to his house.

“Tyler’s legitimately my musical idol for my entire life,” Jarrett Doherty said. “His music had just inspired me so much, so that was one of the coolest moments.”

“(After about three hours of talking), Jarrett said to my brother, ‘I’d like to play you one of my songs,’” Jay Joseph said. “I thought that was one of the (gutsiest) moves ever. (After he played his self-produced song, Hoodie), I said to Tyler, ‘Wow, this kid is really good.’ One thing led to another and the next thing you know, he’s mixing my songs.”

After watching his brother and drummer Josh Dun scale the walls of obscurity to stardom, Jay Joseph gets it when someone becomes a little starstruck around his brother. But he also wants to cast his own shadow.

“When someone comes up to me and says, ‘I’m a big fan of your brother,’ my response is always, ‘Me too,’” Joseph said. “He has had a huge influence on my musical tastes because I’ve been surrounded by (Twenty One Pilots) since I was a kid. It’s not like I am going to go out and do country and western music.

“There’s pros and cons (of being the younger sibling). As an artist, I have to accept the fact that we’re family and we’re going to have similarities. But at the same time, I want to be my own person.”