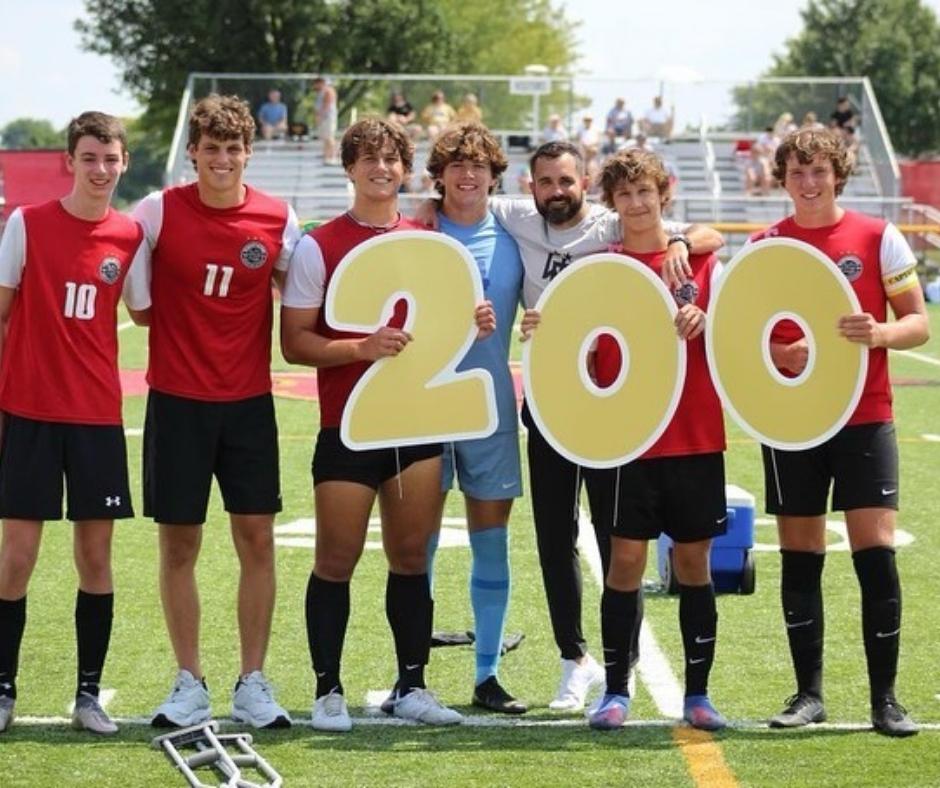 “It was a blessing and a joy just being part of such a big accolade for him,” senior midfielder Matt Yoder said. “He’s been here for a long time and has invested his time in all of us.”

“Oh man, (the celebration afterward) was surreal,” Roads said. “I don’t know if there are too many coaches who reach this mark. It’s almost overwhelming to think about how many games that is.”

Since forming a team in 1978, the Warriors have had only three head coaches and haven’t experienced much of a drought in success. Roads might have difficulty supplanting the program’s founding father, Chuck Grant, who guided Worthington Christian to a 317-117-46 mark during his tenure. Roads’ predecessor, Dwayne Smith (WC ’87), was 69-22-9 as a coach. Roads, who guided the Warriors to Division III state titles in 2009 and 2011 and state runner-up finishes in 2008 and 2010, has never had a team exit earlier than the district finals during his 15-year tenure.

While the team’s faces change from year to year, Worthington Christian’s “Walk Worthy” credo has established the Warriors as one of the top programs in Central Ohio.

“My brothers Levi and Nathan told me all about the traditions Worthington Christian has,” Yoder said. “Doing things like training at Alum Creek, the Sharon Woods run, and the team camp out helps us bond as brothers in Christ. We grow closer together off the field, bringing that chemistry to the field.”

Roads confesses the Warriors’ traditions started long before he came to the program in 2007 and will most likely last long after he is gone.

“Coaches Grant and Smith created these things like the Warriors creed long before I got here,” Roads said as he kept a watchful eye on his players at practice. “Those guys taught players what the identity of a great Christian is.

“Our players trust in the traditions because they know they work. They believe the tiny details in how we do things around here; how we talk, act, and treat one another on and off the field matter.”

Roads, who played at Ohio Wesleyan University from 2002-04, wanted to coach high school soccer for as long as he can remember.

“There are some parents who worry that if their kid plays too much soccer, he or she will burn out,” Roads said with a smile.
“I was never that kid. I just loved to play. I always asked myself, ‘Well, how long can I play?’ I figured out that I can always be a part of the game as long as I coach.

“I had some great teachers and coaches that shaped my view of what makes a great coach and what makes a bad one.”

Roads walked away from the Battling Bishops his senior year after he applied for and was hired as a junior varsity coach for the Delaware Hayes boys soccer team. During that season, he was also hired to teach at Worthington Christian.

After Smith resigned midway through the 2007 season, Roads guided WC through the postseason before the Warriors fell to Springfield Catholic Central 1-0 in a Division III state semifinal.

“One of my goals was to find a high school with a really strong program that I could invest myself in,” he said. “I was lucky to start coaching when I was 25. Everything was just brand new; I was going 100 miles an hour trying to learn how to prepare for games, coach, and handle all these things behind the scenes.”

However, Roads said carrying on the Warriors’ tradition was much harder than it looked. High school coaches must wear several hats during the season: tactician, conditioning officer, psychologist, counselor, and organizer.

“When I started coaching here, the biggest thing I had to learn was not only juggling all of those different hats but also how to designate authority to other people,” he said. “That is one of the many lessons I learned in 15 years of coaching.”

“What makes Roads successful is overall, he’s a really fun guy to be around,” Yoder said. “He will let you struggle as a player to grow and make changes in your life.”

Worthington Christian was one of the local teams who benefited the most when the Ohio High School Athletic Association added a Division III level in 2000. The Warriors reached at least a state semifinal 11 times in the first 14 years of the division.

However, things have become much more difficult over the last decade. Since 2013, Worthington Christian has made it to the regional semifinals in 2014, 2017, and 2021 and lost in the district championship five times, including four losses to rival Grandview.

“It’s no longer a walk in the park for us in Central Ohio,” Roads said. “The schools we didn’t have to worry about too much when I started have grown into these tough teams. It’s a new and developing landscape.”

Each one of those district final losses has haunted Roads.

“There have been losses I’ve never gotten over,” he said. “You have these guys who have worked so hard to get there, and then the chance is gone without them achieving that goal. But it’s those losses that keep inspiring me and keep me chasing that dream.

“One of the things I tell my players is only one team (in Division III) wins its final game. It’s fun to be that last team standing. But one of the highlights for me is how devastated a team is at the end of the season, not because they lost a game but because they don’t get to play together anymore. When my players come back and share how great their season was, that’s when I know I have done my job.”