SCIENCE AND TECHNOLOGY MERGE AT WC 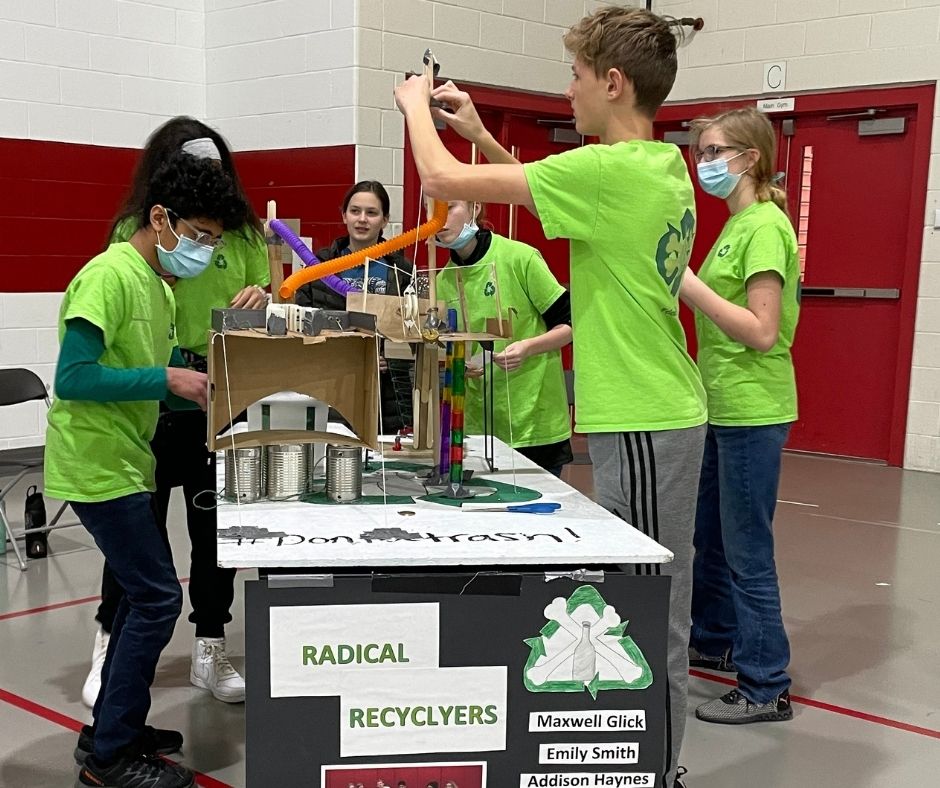 Watering a houseplant. Popping a balloon. Turning the page in a notebook. Starting a toaster. Pressing the “play” button to hear a song. Lighting a candle. These all seem like simple tasks, but not for Worthington Christian School eighth grade science students taking part in the school’s annual Rube Goldberg machine contest.

Named for a cartoonist famous known for his elaborate drawings of inventions performing simple tasks in overly complicated ways, Rube Goldberg’s name is now synonymous with accomplishing a task in an elaborate, convoluted way. Machine contests bearing this name take place at university and national levels each year, and Upper School science teacher Debbie Gilliland’s eighth-graders have taken part in their own contest for many years.

WC’s budding scientists and inventors are placed into teams and tasked with creating a complex, multi-step machine to perform one single ultimate action. Just as WC teachers plan and develop their instruction by starting with the end in mind, so, too, Rube Goldberg participants must start with the end in mind—their final action. Once each team determines their final action, they work backward to create steps toward achieving that action. They collect things typically found around the home (marbles, mousetraps, cardboard, etc.) and begin to construct each of the components of the machine. They pick a team name based on their machine’s last action and create shirts that reflect their names. Once they complete their machines, the teams come together in a competition, presenting and explaining their work to several outside judges who assess their work on multiple criteria.

Eighth graders are divided into two groups for science at the Upper School, so there are now Rube Goldberg competitions in the winter and spring. The winter Rube Goldberg competition for this academic year took place at the end of the second quarter. But these contests are much more than fun, games, and tinkering—students gain a tremendous amount of understanding and hands-on learning through this annual project.

Students learn all of the basic tenets of physics, such as the laws of motion, energy, and force. Eighth grader Bryson Amstertz, a member of the team “Green Machines” describes part his learning through the project, “I learned about the different types of simple machines that make up real machines in everyday life. I also learned how to be more creative with something so open-ended in terms of what to build.” Interpersonal growth is also a key by-product of the WC Rube Goldberg competition. As a team event, students must work hard to communicate with, plan alongside, orchestrate their efforts, and execute their ideas together as a cohesive unit. Andrew Gehfeld, a member of the team “Page Turner” explains, “Other people have good ideas, and I learned the importance of listening to others rather than just cutting them off.” Sophia Valente of the group “Free Fallin'” says, “I learned a lot about working with others.”

For the last 12 years, Upper School technology teacher Pam Cain has added an additional layer of student learning to the WC Rube Goldberg Competition. As a culminating project for the semester, students in her digital technology course entitled DigiTech are each assigned a specific Rube Goldberg team to interview, film, and create a video of their Rube machine. As the science students build the machine, Cain’s Digitech students film the creating, running, bloopers, interviews, and more of the entire process. They then create a movie based on the footage taken in science class. As the curriculum for Digitech includes movie editing, this assignment fits perfectly into the course curriculum. This has been a very successful collaborative project between the science and technology classes over the last dozen years.