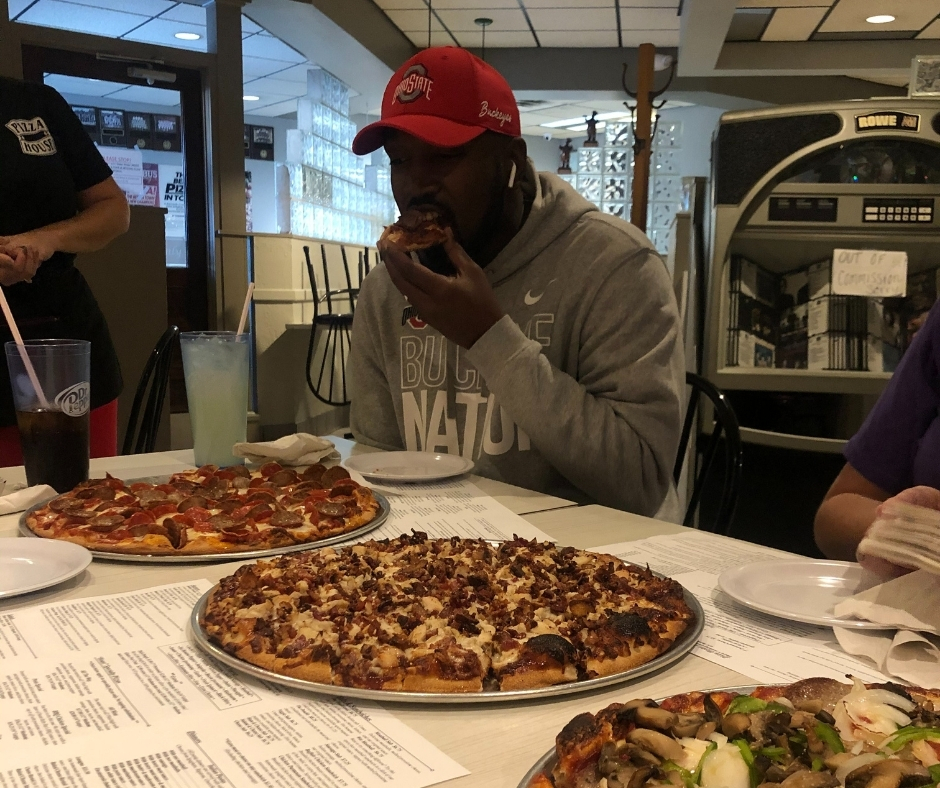 Five years ago, Nakimba Mullins (WC ’93) was driving down Westerville Road in Westerville when he saw something that made him stop in his tracks. It was a person carrying a pizza box out of Pasqualone’s Ristorante.

“I never knew they had pizza there. I thought it was just an Italian restaurant or something like that,” said Mullins, the founder of the Pizza Connoisseurs of Columbus Facebook group. “This was rare for me. I thought I knew about every pizza place in Columbus. I began to wonder about how many other places I didn’t know about.

“I started asking my immediate family, friends, and a few coworkers what their favorite pizza places were on a regular poll on Facebook and it just went off from there.”

The poll quickly grew into the Pizza Connoisseurs of Columbus, which has surpassed 30,000 members. Mullins estimates his site picks up close to 100 new members each day to talk about pizza cuisine in Columbus. The site, which features 180 posts a day, has members from as far away as Europe, Bangladesh, and China.

Mullins said a lot of his members grew up in Columbus but have since moved away. He frequently gets posts like “I am coming back to Columbus. Where should I go for pizza?” or “Is such-and-such place still open?”

The popularity of the site still catches Mullins by surprise.

“(When I started), I thought maybe I would be lucky if I got 1,000 people,” he said. “Once that happened, I figured the site would die out really quickly and no one would post anything anymore.”

However, it is pizza that sparks the most debate. According to Mullins, the Columbus Metropolitan Region is home to close to 400 pizza places and at one time had the most pizza joints per square mile in America. Since pizza comes in many different varieties – Sicilian, Neapolitan, square, circular, pan, thin, thick, New York Style, Chicago Style – that it is bound to start a debate.  Even coming up with the right criteria for what makes a perfect pizza is up for deliberation.

“We have a lot of different styles of pizza around here,” Mullins said. “I rate pizza on topping distribution, tanginess of the sauce, and the crust. I don’t like crusty pizza.

“People are always passionate about pizza because it represents where they’re from and what they grew up on. I have a couple people who like to troll on my Facebook site just to rag on Columbus pizza. They say New York style is the best or Chicago or New Haven. I like my Columbus-style pizza.”

Mullins tries to take large pizza chains like Pizza Hut, Domino’s, Papa John’s and Little Caesar’s out of the discussion.

“The big chains already have their own platforms and Facebook places,” he said. “Once in a while, we will have posts on some of the gourmet pizza chains, like Mellow Mushroom or Beer Barrell pizza. I also include places like Donato’s and Massey’s because they started here in Columbus.

“My website is geared towards Mom and Pop pizza places. We try to promote the little guys around the city.”

Mullins, who said he stopped counting the different pizzerias he’s eaten at 180, began his love affair with pizza when he was growing up in Columbus. His family didn’t go out to eat very often but they did, it was for pizza at Mr. T’s or Plank’s and on special occasions, Ciao’s.

“That was like the ultimate for us. It seemed like we were driving out of town just to get that pizza,” he said with a laugh. “If you’re going out that far, the pizza must be good.”

When he attended college at Wilberforce, Mullin’s obsession with pizza grew to the point that his apartment’s predominant décor consisted of stacks of empty pizza boxes.

“My roommate and I would have pizza every day,” said Mullins, who said he lost 30 pounds in the last three months after reducing his pizzeria visits. “I’ve tried to cut down my pizza consumption back to once a week now. I’m going to Florida for our anniversary and I want to look good in my swim trunks.”

Since starting the Pizza Connoisseurs of Columbus, Mullins said one of his goals is to organize a pizza sampling event to raise money and awareness for domestic violence. But for now, Mullins maintains the site is simply a fun hobby.

“I’ve had people offered to buy the site and meetings with me on how I could make money off it,” Mullins said. “None of that intrigued me. I think it would kill the vibe of it and turn my group into a big advertisement ring.

“The only advantage of running the website is there are a couple places I could go where I wouldn’t even have to pay for a pizza but I don’t want to seem like a moocher.”