THE BEAT OF A DIFFERENT DRUM: RENO HOUSTON (WC ’17) 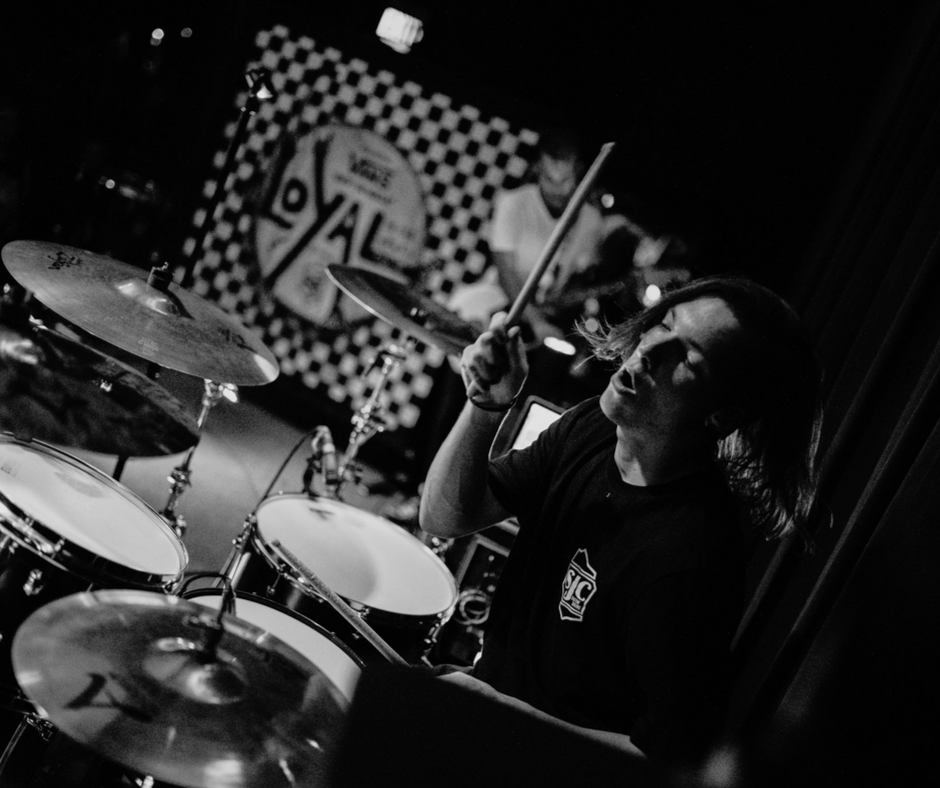 Houston has no problem performing in front of heavy metal audiences

As he looks back on it, even Reno Houston (WC ’17) has a hard time believing the kind of luck his band, Pray for Sleep, has had. The heavy metal band that consists of Houston (drums), Grant DeCrane (vocals), Hayden Kissler (guitar) and Ethan Carlson (guitar), went from playing its first gig in front of a small crowd to playing one of the side stages at Rock on the Range, one of the biggest rock festivals to hit Columbus, last spring.

“It was weird,” said Houston whose band won a Battle of the Bands competition to receive the opportunity to play one of the side stages in front of Mapfre Stadium. “It was a crazy experience. It was a little nerve-wracking but that comes with the territory.

“The response was better than we expected.  We really didn’t expect people to show up, but whether they did or didn’t, we were going to have fun.”

Adding to the chaos, Houston said, was whether Carlson and Kissler were going to make it to the soundcheck. The two were supposed to graduate from Olentangy Orange High School near the same time as the start of the festival.

“We were figuring out if they were going to go walk (at the school’s graduation ceremonies) and then run to the show or skip it altogether,” Houston said. “They ended up going to the graduation, taking a few pictures outside the venue and, then heading straight to the soundcheck.

“That was crazy. That show was a big turning point for us. Now, we think we can do this as a career eventually.”

The performance at Rock on the Range was just part of the chaos for Pray For Sleep. The catalyst for the band’s start may have come from the Westerville Fourth of July parade.

“I was in a dance company for a couple of years and, they got a flat-bed truck for the Fourth of July parade,” Houston said. “I was playing drums on it while everyone in the dance company was dancing alongside it. I got one of my friends to record a video of it, and after the parade, I put it on Instagram for fun.”

The video was unearthed by Kissler, who immediately sent Houston a message.

“He sent me a message saying, ‘Hey. I know you don’t know me but I saw your video and I think you’re really good. I play guitar and if you ever want to, let’s get together and jam,’” Houston said with a laugh. “I was like, ‘Yeah sure.’ He eventually came over and we played a couple of songs from bands we liked. We hit it off from the beginning.”

After a series of shifts in personnel, Pray for Sleep began writing and recording its own music about a year and a half ago under the direction of Columbus producer Will Carlson. The band released a five-song EP last December and plans to release a full album soon.

Houston has been in bands since elementary school when he and his friends started Midday Son. The band led worship at the elementary school and the middle school and was even the warm-up act for Twenty-One Pilots, which is fronted by Worthington Christian graduate Tyler Joseph, at a church gig in the early days of the band.

Since he was young, Houston always seemed to have a pair of drumsticks in his hands. It was a skill he picked up from his father Mike.

“Ever since I was old enough to comprehend what I was doing, my dad has been teaching me how to play drums,” Houston said. “My dad and I listened to Rush a lot when I was growing up. Neil Peart was one of my biggest influences. He’s one of the best I’ve ever seen and he does a lot of stuff I’ve tried to pick up on.”

Houston cites the Rev (James Owen Sullivan), the drummer for Avenged Sevenfold and Motley Crue, led by drummer Tommy Lee, as two of his many influences.

However, when Houston and his friends were forming Pray for Sleep, they wanted their lyrics to go far beyond the banality of Motley Crue songs like “Girls, Girls, Girls.”

“We wanted to be for something. We wanted to have some kind of message with it rather than a bunch of guys coming together to play music,” Houston said. “We all sat down and said, ‘what are the values of this band? What kind of impact do we want to have? What do we want to write about?’”

“All of us came through similar mental health struggles. I’ve battled depression and anxiety for a long time. We wanted to help people while we were writing music. Every single song on this album is about a different issue:  suicide, depression, addiction, anxiety.”

The band operates a fan base called “Scream Back.” They also work as an “education partner” with the mental health wing of Nationwide Children’s Hospital. They recently played a gig at Grandview Heights High School to raise awareness of mental health issues.

“We want to give kids ideas on how they can help themselves,” Houston said. “It’s an inclusive thing. Everybody goes through something.  If two people are going through the same thing, maybe they can help each other.”