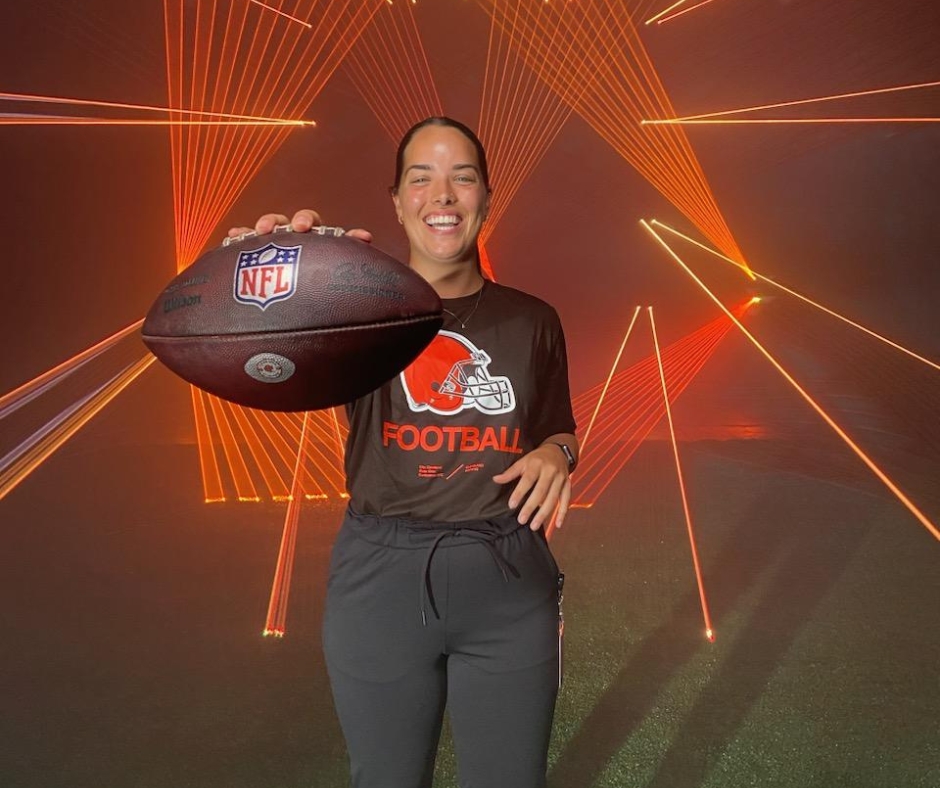 If you ever saw a picture of former Cleveland Browns quarterback Joshua Dobbs throwing a pass on the gigantic jumbotron at FirstEnergy Field, thank Ellie Bowers.

“It’s kind of cool,” Bowers said. “Every once in a while, I will look on Twitter or Instagram and something about the Browns will show up. I think, ‘Oh wow! I was literally standing right there behind the cameraman.’”

Bowers became Dobbs’ favorite receiver, catching passes from the quarterback while being videoed for his game-day profile.

Dobbs was originally asked to throw the ball into a curtain while a video crew shot his motion. A Dobbs spiral ripped a huge hole in the curtain on his first throw.

When someone shouted, “Okay, someone needs to catch balls from him,” Bowers immediately stuck up her hand.

“I was catching passes from Dobbs for like 25 minutes, and I didn’t drop a single one,” she said with a chuckle. “He threw a super high one, and I snagged it. He went, ‘Nice hands!’ I mentioned I was a goalkeeper in college.

“He was super nice and fun to work with. That was one of the highlights of that day.”

Bowers did a little bit of everything during her time with the Browns. Throughout the preseason, Cleveland hosted several open practices the public could attend. On those days, Bowers and her team helped organize activities for the attendees from 7 a.m. until late in the evening.

Bowers’ activities ranged from setting up inflatable goal posts and receivers to allow fans to pretend they were a placekicker or a quarterback to running a Tik Tok dance station where fans would dance in front of a green screen, and a Cleveland Browns player would be added to their video. Bowers also worked with the alumni stage, where a former player would come in to sign autographs.

One of Bower’s more unusual duties was handling the “Puppy Pound.” Since Cleveland has the notorious “Dawg Pound” fan section, the organization added a “puppy pound.” The American Society for the Prevention of Cruelty to Animals would bring ten puppies to the training camp for attendees to play with.

“We saw quite a few puppies get adopted through that,” Bowers said.

However, the internship’s highlight was being tagged as a guest DJ in the Browns media center. Bowers would ask players for their three favorite songs or artists to be playing in the background as the player danced around or struck intimidating poses for their scoreboard profiles.

“All of my interactions with the players were so positive. Every player was so nice and appreciative of what everybody was doing for them. They were just really patient through the whole process.

“NFL players have a certain stigma associated with them, yet I found out they were just normal people. It was cool to have that interaction with them.”

Bowers, a former Warriors goalkeeper, is used to being around athletes. During her four years, Worthington Christian advanced to a Division III regional semifinal in 2014 and a district final in 2016.

“I got to help design our championship ring,” Bowers said. “It was really cool and a good way to end my experience of being a student-athlete.

“But college is an alternate reality. There’s nothing real about it. You’re around people 24/7. Now that I’m entering the adult world, life slows down. It’s been fun for me to dive into my faith and build upon that foundation, to find God in the quiet moments and invest in my relationship with Him.”

Bowers said she is grateful for the foundation of faith Worthington Christian provided and the time people like Alicia Kraynak, the wife of Upper School principal Tim Kraynak, poured into her life.

“(Ashland) was the first time that my faith was no longer of my parents’ beliefs or from my school,” she said. “Throughout college, you still have ups and downs with your faith, but I am so grateful for that foundation WC provided for me over all those years.

“Alicia Kraynak had a Bible study for my group of friends, and to this day, I still keep in touch with her. She’s been a spiritual mentor of mine over the last eight years. I will take my faith with me into this next phase of life.”