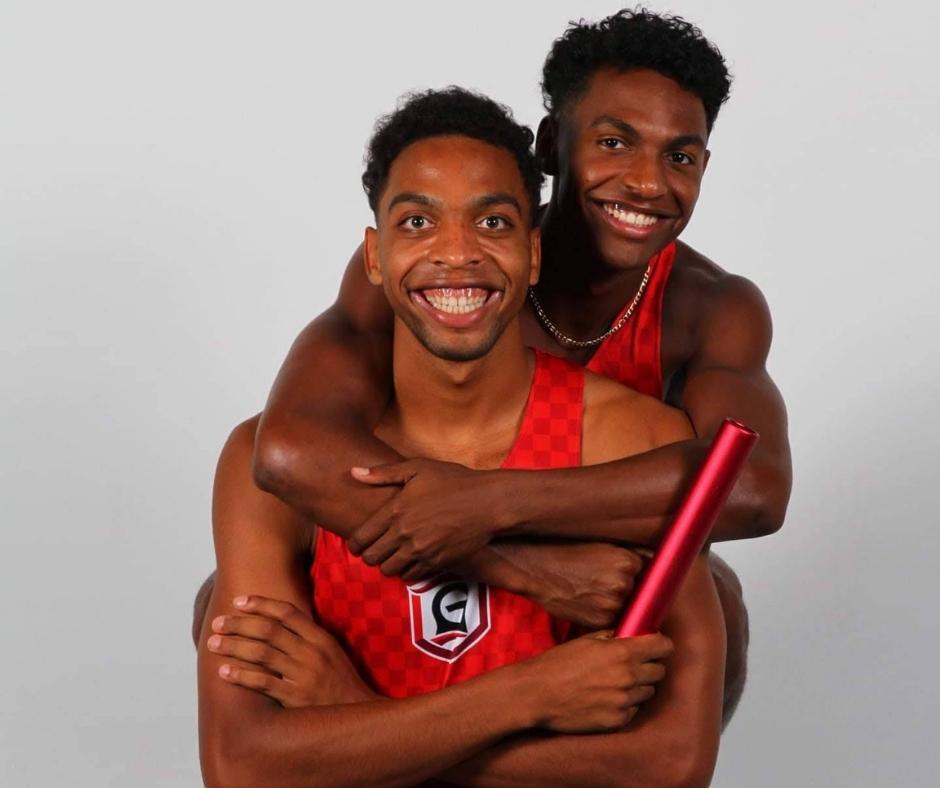 After taking third in NAIA, the WC twins head off on separate tracks but will always be close on each other’s trails.

Worthington Christian alums Luke and Kyle Smith (WC ’18) admit a sense of melancholy set in at the National Association of Intercollegiate Athletics meet on May 25 in Gulf Shores, Ala.

In the 4×800-meter relay, the Smith twins paired up with Grace College teammates Tanner Sallee and Logan Rufenacht to set a school record with a time of 7 minutes, 31.22 seconds to finish third behind Indiana Wesleyan (7:29.55) and Grand View (7:30.6). After the race finished, the two Smiths realized an era was ending. Starting this fall, Kyle will be pursuing his master’s degree and running for the University of Cincinnati while Luke will be working towards a master’s at Grace and competing for the Lancers.

“It was bittersweet,” Luke said. “We’ve been running together since seventh grade. It hit me a couple of times during the season that this would be the last year. But after that event, it just felt a little more real that Kyle wasn’t going to be here next year.”

“This year is going to be difficult,” added Kyle, who also placed fourth in the 800 meters (1:51.56) at the NAIA championships. “No one gets me as Luke does. Whenever something happens, we’d give each other that look, and the other one would understand what was going on. We appreciate what we had, but we know it is time to move on. This is the new normal.”

At Grace, Kyle and Luke established eight school records on the Lancers’ track and field’s list of team bests.

At Worthington Christian, the two constantly shadowed each other, making the varsity teams in soccer and track and competing with each other on the Warriors’ basketball and cross country teams. Kyle credits his brother for getting him started in track and field when the two competed in Worthington Christian’s “Fun Run,” where elementary school students take part in a mile-long run.

“Luke was a natural athlete and won the race in like 6:40,” Kyle said. “I hated running. It was work. I couldn’t see the point of it. I finished 53rd in like 19 minutes because I stopped in the middle of the race and sat on a bench about halfway through.

“Next year, I didn’t want to get embarrassed again for the fun run. I wanted to prove to myself and to everyone else I could do this.”

That year, Luke trimmed 20 seconds off his previous year’s time to win in 6:20 while Kyle placed 20 seconds behind him.

“Ever since that day, we were known as the running Smith brothers,” Kyle said.

While they do many of the same activities, Luke and Kyle look like they are twins, as well as Arnold Schwarzenegger and Danny DeVito. Kyle is 6-foot-6, while Luke stands at 5-10. At Grace, many people had difficulty believing the two were related, let alone twins.

“A group of friends threw us a surprise birthday party, and one of our friends had no idea we were twins,” Luke said. “The following day, I said something like, ‘My twin brother is crazy.’ And this person goes, ‘You two are actually twins?’ I said, ‘We have the same last name, are in the same year of school, went to the same high school, and have the same birthday.’ She said, ‘I thought that was just a coincidence.’”

“Another time, a teacher at school offered to drive us somewhere,” Kyle said. “When she asked what our names were, I said, ‘I am Kyle Smith, and he’s Luke Smith. We’re twins, actually.’ She was like, ‘Oh, you guys are funny.’ We were like no, really, we’re twins. We pulled out our IDs and said, ‘look, we have the same address here, the same date of birth. You can’t make that up.’ We even showed her our baby pictures, and she still didn’t believe us.”

Despite all their similarities, Luke and Kyle almost didn’t attend college together. Luke was sold on the Lancers’ program, but Eastern Michigan was wooing Kyle. After his brother committed to Grace, Kyle put together a list of the pros and cons of each school and after he was still undecided, he presented it to his father, Dwayne.

“Dad said, ‘I think you should go to Grace,’” Kyle said. “The next day, I called their coach and committed.”

The two also played soccer for Grace for three years before they both decided to concentrate on track and field. Throughout this season, the brothers often didn’t get a chance to compete. Luke was battling his way through a back injury, and he thought he might not get a chance to run in the NAIA meet.

The injury forced the 4×800 relay to split the rotations of the relay between Luke and Isaac Beatty, who was also battling an injury. Luke didn’t compete in the two preliminary heats of the event and came into the NAIA final cold.

“This was the first time I had not run in the prelims, so I was stressed,” Luke said. “Then we had rain delays, and right before the finals, we had a lightning delay. I had all this anxiety built up for one race.”

On the other hand, Kyle was excited to see what his relay could do with his brother in the quartet.

“I kept thinking how good we could be by the end of the season,” Kyle said. “We just kept encouraging Luke and telling him not to get down on himself.”

After the emotional high of the 4×800 relay, Kyle almost missed his chance to compete in the open 800 at the NAIA meet. He had a three-hour lull between the two events, so he decided to go back to the hotel, eat, and rest before the 800. He returned to the track about an hour before his event, only to find he didn’t have his track uniform.

“I looked through all my bags, and it wasn’t there,” Kyle said. “I called my teammate, and he said it wasn’t there in the room. Finally, I called my girlfriend, and she said, ‘yeah, it’s right here on the table.’ ‘Can you bring it here as soon as possible?’”

After she arrived with the singlet, Kyle had about a minute to check in for his event. After he registered for the 800, he realized he had another problem. He didn’t have his spikes.

“This is terrible,” Kyle said, laughing at the memory. “I thought I would have to race in these tennis shoes. I went to the runners from Westmont and IWU, asking if they had any extra size 13 spikes.”

After striking out with those two teams, he saw a Grand View runner who was roughly his height and asked him what size spikes he had. Kyle pleaded with the runner to borrow them when he found out they were his size.

“Once I got them on, I didn’t even have time to warm up,” Kyle said. “I took a couple of strides to align the shoes, and then the gun went off.”

The dramatic meet might have been the perfect send-off for the two, but both hope it is not the last time they compete at the same place. Last year, Grace went up against Cincinnati during a regular season meet, and Luke and Kyle hope if the two schools end up on each other’s schedules again, the two brothers will compete against each other instead of with each other.

“I don’t know how it will be this year,” Kyle said. “I know there will be times when I’m going to go, ‘Man, I wish Luke was here.’ But I am excited to see what happens.”