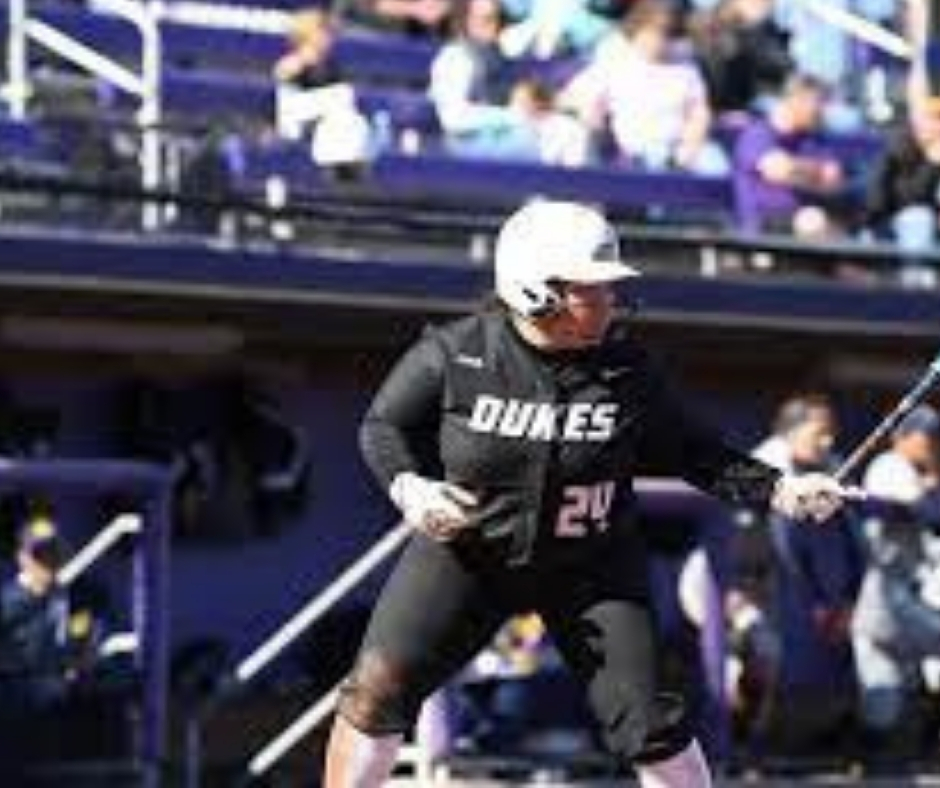 In nearly every game they played at the Women’s College World Series in Oklahoma City, the unseeded James Madison University softball team had the role of David in a bracket filled with Goliaths.

“The way our girls kept coming up clutch was absolutely unbelievable. I still can’t get my mind around it,” said Meeks, whose team finished in the top four after losing twice to top-seeded Oklahoma in a double-elimination national semifinal. “I really don’t have words for you. This team has grinded through so much this year. It was awesome to be on this side of things.”

The Dukes, who upset No. 25 Liberty University and No. 8 Missouri to advance to the World Series, started the championship with back-to-back surprise wins over the No. 1 Sooners’ 4-3 on June 3 and No. 5 Oklahoma State 2-1 on June 4. James Madison however lost to Oklahoma 6-3 in a second meeting in the double-elimination tournament on June 6 and was eliminated by the Sooners 7-1 on June 7. In the best-of-three championship tournament, Oklahoma lost to Florida State 8-4 on June 8, then bounced back to defeat the Seminoles 6-2 on June 9 and 5-1 on June 10.

In a way, the success of Meeks, a starter in all 45 games this season, mirrors her team. She has often been doubted, overlooked, and sat on the bench more times than she started.

On May 31, four days before facing top-seeded Oklahoma, Meeks tweeted “I was told I was ‘too short to play D1 ball.’ I’m 4-11 and headed to the Women’s College World Series. Bet against yourself.”

“My size has always motivated me to work hard and do the little things,” she said of her tweet which was in response to a post that pointed out that the eight of the teams in the finals had 82 players under 5-foot-6. “I just want whoever picks up a softball to know if you work hard, you’re going to get to where you need to be.

“You don’t have to be a standard height or be what a typical softball player looks like to be successful. Softball players come in all shapes and sizes. Work at it and you’re going to go somewhere.”

The team’s 4-3 victory over Oklahoma in eight innings in the opening round on June 3, was called by ESPN “one of the greatest upsets in collegiate softball in the last three decades.”

In one corner was the top-seeded Sooners, who were at the time 50-2 overall, had run-ruled 33 opponents and were aiming for their fourth World Series title since 2013

In the other corner was the unseeded Dukes, who were making their first WCWS appearance in school history. Against the Sooners, JMU jumped out to a 3-0 lead on shortstop Sara Jubas’s three-run home run in the third inning. However, Oklahoma scored three runs in the bottom of the third to tie it up. The Dukes won the game on left fielder Kate Gordon’s solo shot in the top of the eighth inning.

“Those Oklahoma girls were just giants,” said Meeks, who turned a key double play to halt one scoring threat. “We knew we needed to fight through the entire game.

“I don’t think we got down at all. The whole team knew we were going to have to stay in the game and it was going to be a dogfight the whole time.”

Meek’s diminutive size has become a strength rather than a liability. This season, she finished ninth in the nation in walks per game with 40 walks.

“It’s definitely cool to see how many walks I have and how I can help the team with that,” said Meeks, who has a .290 batting average with five home runs and 28 runs batted in. “My height definitely helps at that because I have such a small strike zone. That makes it harder for opposing pitchers. I have a lot of discipline and my eye has gotten so much better over this season.

“If I stay within myself and hit what I can hit, I can be effective.”

At third base, Meeks has a .930 fielding percentage and leads the team in assists with 75. Despite the solid numbers, it took a while for Meeks to get a chance to start.

In her first three seasons with the Dukes, she played in 54 games, starting only in six of them. While she wasn’t getting her chance to play, Meeks was labeled as “The Hype” by JMU teammates for her vocal encouragement. Meeks said some of the lessons she learned at Worthington Christian came in handy during those times.

“Worthington Christian taught me how to be a great teammate,” Meeks said. “Whether I was on the field or on the bench, I learned to celebrate other teammates’ successes.

“Celebrating my teammates’ successes has kept me prepared for this moment. I’m happier when a teammate succeeds than when I am for myself. I’m always looking to help others. I’m trying to build them up and that brings me up as well. I show them that I’m here for them.”