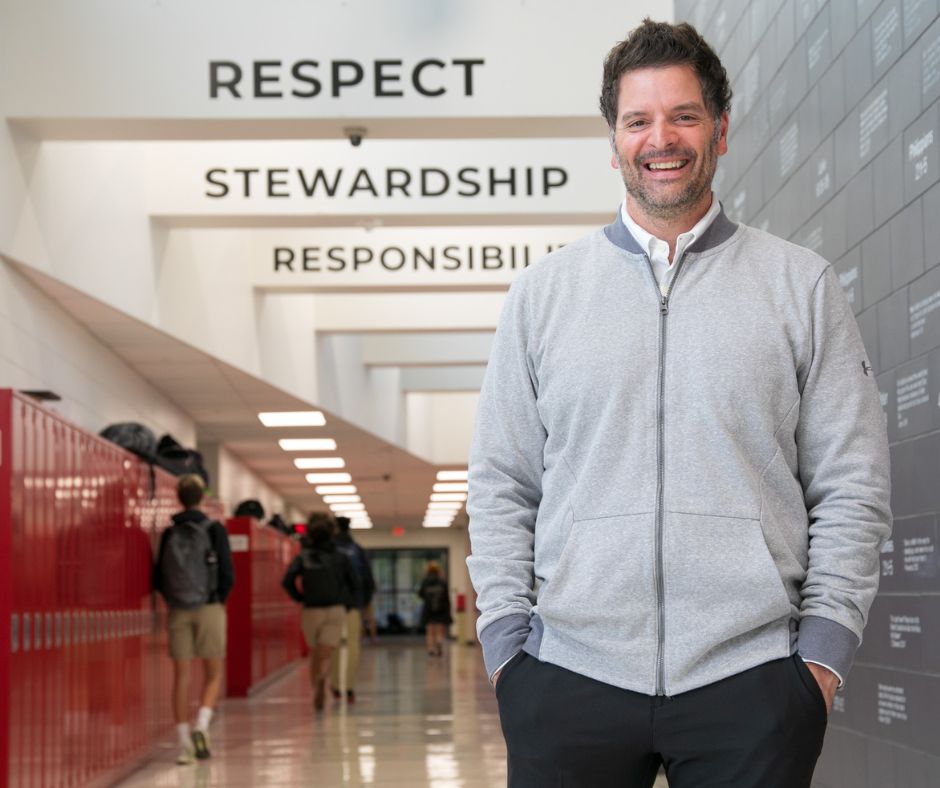 In December of 2022, Worthington Christian School’s Head of School Dr. Mike Hayes officially announced Tim Kraynak as Upper School Principal, naming him the head administrator for grades seven through 12. Hayes explained, “He [Kraynak] has worked in a variety of roles, distinguishing himself as a caring, diligent, and committed member of our staff. I look forward to continuing to serve with him in this capacity as we move forward.” Given his history with WC, his connection to the present, and his vision for the future, Kraynak is uniquely poised to lead the Upper School into God’s plans for it in the coming years.

Kraynak’s initial experience with WC was as a young boy. He was a Warrior throughout his grade school and secondary schooling. After graduating from WC in 1994, he attended Otterbein University in Westerville, Ohio. There he earned a Bachelor of Science degree in education with an emphasis in social studies. He later earned a master’s degree in curriculum and instruction from Nova Southeastern University. He returned to WC in 2000 as a fifth-grade math and science teacher. Three years later, he joined the high school faculty, where he taught many classes, including government, economics, world history, physical education and health, and marriage and family classes. He then moved to an athletic director role for four years. In 2010, Kraynak became the then-high school assistant principal and guidance counselor at WC, working directly with students and their families in an administrative role to provide support for standardized testing, course selection, and college and career guidance. Throughout this time, he has also served as the Warrior Varsity Baseball Coach.

Kraynak’s history at WC is also a family endeavor. He and his wife Alicia met in second grade, went on their first official “date” to WC’s Homecoming as high school freshmen, and later married. They now have five children who have attended or are currently attending the school.

Connection to the Present

Though Kraynak’s experience at WC is deeply rooted in the school’s rich history, he is well-connected to the school as it is today and what God is doing in the present. His present-day connections are both personal and professional in nature. As a parent with four children currently attending WC and one alumnus, he is intimately acquainted with this generation’s unique characteristics, needs, ways of learning, and ways of relating. His wife, Alicia, whom he credits as being his primary source of encouragement and partner in this endeavor, is also highly involved with students at the Upper School. She volunteers as co-leader for an initiative to connect high school grade girls at WC with each other for mentorship and discipleship.

In addition to his personal connection to the present, Kraynak’s prior experience in the classroom and as assistant principal and guidance counselor has provided him with a front-row seat to what life looks like for students and their families nowadays. He has seen and felt the changes over the last several years as technology and social media have taken a prominent role in daily life, and how this reality directly influences every aspect of education.

Kraynak has also walked alongside the students and staff of WC through transitions and changes of historic proportion recently. Beginning in the summer of 2021, he began serving as the Upper School Interim Principal. During this 18-month period, he dutifully supported school staff and students in the wake of the Upper School’s massive physical move to the new campus and the continuing effects of COVID-19 and its impact on education. He has been a consistent voice of leadership and encouragement all along the way.

Vision for the Future

As Kraynak looks ahead to the future of the Upper School, he plans to continue focusing on three key areas: citizenship, student life, and spiritual formation. Through an emphasis on citizenship, students develop a deeper sense of respect, stewardship, and responsibility. Student life helps students experience community, develop more robust character, and experience spiritual growth on an authentic level with peers. Spiritual formation happens in every area of a WC and is based on a commitment to Christ-centered learning, Bible-based teaching, and worship. These three key areas are all centered around Christ, with the goal of setting students on the right path as they walk out their God-given callings.

Kraynak is quick to explain that his vision for the Upper School’s future is fully in God’s hands. A message he felt clearly from the LORD during his term as interim was, “Get out of the way and let God work.” He holds fast to that truth as he moves into the permanent principalship. “God is very much at work at WC,” says Kraynak, “I am excited to see what He does in the coming days.”