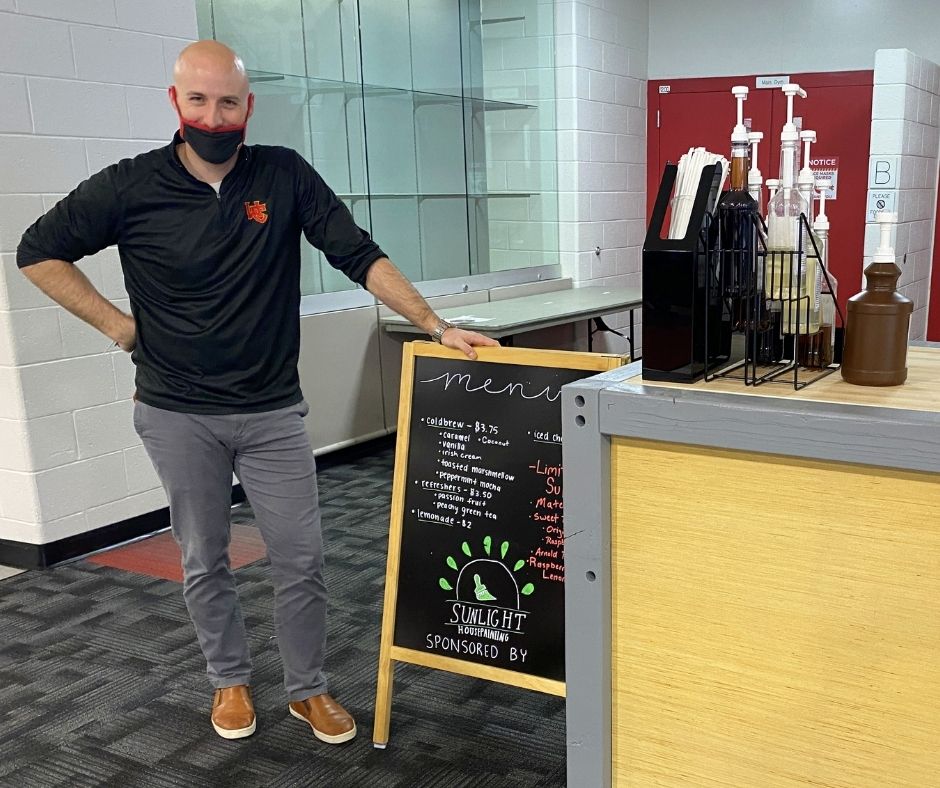 WC business teacher Nick Johnson’s newest elective course offering began much like any successful business–with a simple, good idea. This particular idea came to him first when he was a teacher at Marion Harding High School. He began to notice how many of his high school students came to school with Starbucks cups in hand, and how many were arriving late because of it. It was this phenomenon that inspired his idea: to start a school coffee shop.

Johnson brought this idea with him when he joined WC’s faculty in 2018. After visiting a large Christian school in Cincinnati with existing school-based business ventures, Johnson felt the time was right to launch his idea. So, in August as the 2020-21 school started, a brand new elective, Entrepreneurial Incubator, was added to the Upper School’s course offerings. In the first week of the class, Johnson told the 15 students enrolled that they had one goal—to start a coffee shop at WC’s Upper School. It was then and there that these 15 students embarked on what has proven to be a difficult but fruitful journey of learning what it takes to start a small business.

“There have been lots of steps to the process and hoops to jump through along the way,” Ben Evans says of the class experience. Evans, the lone senior in this first-ever year of the elective, plans to study finance at Cedarville University after graduation. He explains that this class has broadened his perspective on business and finance. One of the first hurdles that the class identified in launching a coffee shop was, in fact, finances. The students wondered how they would start a brand-new business without funding. They considered applying for a small loan, but through networking, they were able to secure a sponsor in Sunlight Housepainting, a local business owned by WC alum and parent Aaron Steininger (WC ’97). With enough money to get started, the students came to their next big task—pitching the coffee shop concept to the school’s administration.

The students drafted a business plan and presented it to the school principals and finance director. Junior Olivia Scholl, who has become one of the business managers for the class, describes this as a nerve-wracking process, “There was a lot on the line.” Many weeks of preparation, and the idea upon which the entire class was built, were on the line for the students’ sales pitch. They experienced a collective sense of relief upon hearing of their plan’s approval by the school administration, but the coffee shop and its creators still had their biggest hurdle ahead.

In order to sell food and beverages, Johnson and his students knew they would need approval from the local health department. This task proved to be their most difficult challenge. They had hoped to do a soft-open of the coffee shop as early as last November, but the health department still had not approved their food license then. The process became a waiting game that made the students and Johnson question whether or not it would actually ever come through. As they continued to wait, the students focused on other facets of the business, including product selection, logo design, and cart construction.

Johnson and his students knew the success of any future business would depend on having quality products at competitive prices. Johnson has also emphasized to his young entrepreneurs the importance of supporting other local businesses. They met with and received samples from several local businesses. They taste-tested many coffee and syrup options, which was a process in and of itself. They finally landed on selling Crimson Cup coffee, Phillips Syrup from Cleveland, Ohio, and milk from two local dairies (Snowville and Hartzler).

Another key component to the Warrior Café’s development was its logo design. But the young entrepreneurs had to look no further than their own classmate for this piece of the business plan. Junior Luke Snedecor is not new to business–he launched his own graphic design business two years ago and now maintains an Instagram page for his business with more than 10,000 followers. He worked closely with WC’s Office of Advancement to develop a custom logo for the coffee shop that is in keeping with WC’s existing brand identity. He also created a distinct Instagram account for the coffee shop that already has over 200 followers. Using his logo design, the class started selling custom tumblers in November to generate additional funding. This campaign was a successful way to secure more funds for the budding business, as well as a marketing strategy to generate buzz among the students.

Another part of the planning process for launching the Warrior Café was deciding where and how to sell their products. Without a designated space for beverage business, the students and Johnson decided that a moveable cart would provide the most flexibility and functionality. But where to find a cart that met their business needs and specifications? The group of young businesspeople again looked to one of their peers for his unique gifting and abilities. Using the design skills and experience he gained through taking business technology courses at WC under the guidance of teacher Pam Cain, junior Micah Shemenski stepped up to both design and build the Warrior Café coffee cart himself. After approximately 20 hours of design and labor, Shemenski’s custom coffee cart was complete and ready for operation in January. But the health department’s food licensing still loomed large over the entire project, requiring the students to continue postponing their opening date through January.

Finally, after the many steps were taken and hoops jumped through, the Warrior Café received its stamp of approval from the health department. Overcoming this final obstacle was at once exciting and panic-inducing for the class of young entrepreneurs. They questioned whether or not they were truly ready to launch Warrior Café after so many months of preparation, but they pushed through and officially opened in February only selling hot beverages. In March, they launched their cold brew menu and sales have soared. The group is crushing its initial sales goals. For now, they are using their sales to enhance the business and make it more efficient and professional. In the future, Johnson hopes that proceeds from the Warrior Café can be used to support seniors funding their Capstone experience. He also has his sights set on expanding this program.

Next year, Johnson will offer another new elective course entitled “Small Business Management,” in which students will run the Warrior Café and learn business principles along the way. There are many opportunities to expand the coffee-based business. Collaborating with WC’s business technology department to develop an online ordering app, expanding the beverage options, adding food options to the menu, and working with a local company to create a custom coffee blend are just a few of his future plans. He will also continue to offer the Entrepreneurial Incubator course, and it will be focused on developing additional business ventures decided upon by its students. Just as Johnson’s simple idea blossomed into a reality, he hopes to offer WC students the opportunity to realize their own business dreams.